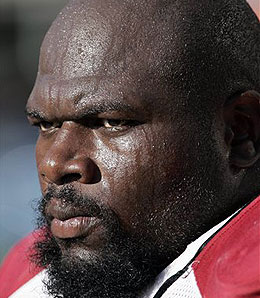 Leonard Davis may not have as big an impact on the Cowboys as they think.

While the NCAA tournament putters along (yes, I’m already eliminated in my pools, thank you very much, Texas), it’s time for me to turn my attention back to the footballers. The free agency period has died down recently, which means it’s a good time to figure out what fantasy impact all of these signings will have. Let’s start with the good ol’ NFC East.

The Skinny – As you can see, the Cowboys haven’t done too much this offseason so far. Davis was a huge signing according to the team, but as someone who actually watched the Cardinals a lot last season, I don’t exactly agree. Tony Romo is still the man at the helm, but if he can’t get solid pass protection, then all bets are off. Sadly, I don’t have much optimism from these signings. I just hope that Terrell Owens gets healthy and the protection holds up.

The Skinny – The losses certainly outweigh the gains here, and that’s not including the retirement of Tiki Barber. The Giants offensive line had an uneven season last year, but now it becomes an area of concern for draft day. Expect the G-Men to take at least one tackle pretty high. Despite the Droughns signing, Brandon Jacobs is the best ball carrier on the roster, so it will be interesting to see how that shakes out in the preseason. I’d talk about the linebackers, but I don’t think they made a tackle all season anyway.

The Skinny – The most important thing to remember here is that everything that happens this offseason for the Eagles is moot unless a healthy Donovan McNabb returns to the lineup. Of course, it would be nice if this team had a legitimate number one wide out, but it seems content with throwing out a bunch of number two and three guys. Thomas is a nice signing as he came alive to the tune of six sacks in spot duty last year, but losing Lewis in the secondary hurts a lot. After a rocky start to the 2006 season, Lewis turned things around and became a weapon for Andy Reid. Unfortunately, by the time the Eagles figured out how to use Lewis, they had already decided to dump him at the end of the season.

The Skinny – The Redskins, long known for their freewheelin’ free agent periods, decided to play things closer to the vest this year. They spent more time re-signing their own players, which explains the lack of a big name in the ‘Key Departure’ column. Unfortunately, due to ill-advised trades, the Redskins have, essentially, one worthwhile pick in the upcoming draft. Still, maybe Daniel Snyder has come to the conclusion that team chemistry is worth considering to some degree.

By the way, I’m no expert on basketball, and I think it’s cool that the NBA puts up game highlights on YouTube, but shouldn’t someone be proofreading the titles they put on these things? Jeez, Mr. Stern, children can read that.

By Andy Goldstein
This entry was posted on Thursday, March 22nd, 2007 at 4:52 pm and is filed under Andy Goldstein, FOOTBALL, Gridiron Goldstein. You can follow any responses to this entry through the RSS 2.0 feed. Both comments and pings are currently closed.