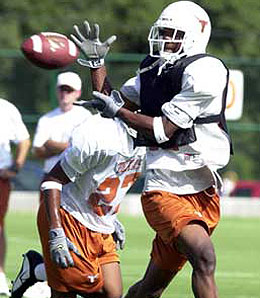 The Jets could take a look at Texas cornerback Aaron Ross with their first round pick.

Time to finish up my preview of the first round of the 2007 NFL draft, from a fantasy football perspective. Part I, Part II, and Part III can be found, um, there, there, and there. Ahem, anyway, on to the conclusion.

Expert’s Whispers – The Jets might have been a bit boring, but they got the job done to the tune of 10 wins. With an offense ranked 25th overall in the league, however, one would hope for an upgrade. Sadly, the experts don’t see this happening through the draft. Aaron Ross (CB, Texas) and Quentin Moses (DE, Georgia) are names being thrown around.

Fantasy Owner’s Dream – Dwayne Jarret (WR, USC) or Robert Meachem (WR, Tennessee) could be available at this spot, and either would add a nice weapon to the Jets. If both are gone, Sidney Rice (WR, South Carolina) would be my next pick.

Expert’s Whispers – While the Eagles may spend more picks on offense than defense in this draft, their first round selection will probably go to the latter category. Michael Lewis is gone, so Michael Griffin (S, Texas) could take over. Of course, the linebacking crew remained a weakness last season, which could mean Paul Posluszny (LB, Penn State) or Patrick Willis (LB, Ole Miss) become the Eagles first pick.

Fantasy Owner’s Dream – The status of Dont’ Stallworth is still up in the air, so adding a wide out like Rice (WR, South Carolina) would ease Donovan McNabb’s return from injury.

Fantasy Owner’s Dream – With Joe Horn on the way out, having another quality receiver on board would be a boost for both Drew Brees and Marques Colston. Rice (WR, South Carolina) is a possibility. Greg Olsen (TE, Miami) has also moved up some draft boards lately.

Expert’s Whispers – This is the Patriots second pick of the first round, and it would be a travesty if they didn’t take a wide out with at least one of them. Dwayne Bowe (WR, LSU) would fit well.

Expert’s Whispers – The Ravens certainly have already had some major player movement. Adailus Thomas and Jamal Lewis might both be gone. Anthony Spencer (LB, Purdue) is a hybrid type player and would fit well with Rex Ryan.

Fantasy Owner’s Dream – Let’s face it, even if Lewis comes back, his career has been over for a while. Michael Bush (RB, Louisville) might be a bit of a reach, but the gamble could pay off for a team that needs to be able to run effectively. (And, you know, for fantasy owners who would love to have another clear cut starting back in the league.)

Expert’s Whispers – The Chargers need some help catching passes and stopping other teams from catching passes. Griffin (S, Texas) probably wouldn’t get past the Chargers if he were available. If he isn’t, Rice (WR, South Carolina) and Bowe (WR, LSU) become the top picks.

Expert’s Whispers – There’s a consensus that Chicago will go with the best offensive lineman left on the board. Justin Blalock (G, Texas), Arron Sears (OT, Tennessee) and Ben Grubbs (G, Auburn) are the likely candidates.

Fantasy Owner’s Dream – That will help both the deep passing game and the running game, so I won’t protest the Bears not taking a skill player.

Expert’s Whispers – Clearly, the Colts are going to address the defensive side of the ball. Justin Harrell (DT, Tennessee) or Jon Beason (LB, Miami) would both help with that not-so-great run defense.

And that concludes my fantasy look at the first round. Hopefully those offensive players will get put into good situations and we’ll get lots of fantasy points come September.

Jacksonville would love to land OSU’s Ted Ginn Jr., but he’ll likely be gone by the time the Jags are on the board. As the NFL draft gets closer and closer, I’ve been going over what each team will do with their first round selections. Part I is here, and Part II can be found…right…here. […]