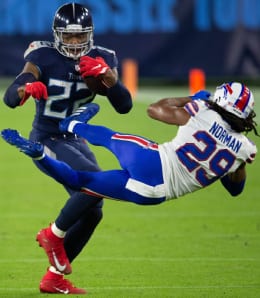 Owning Derrick Henry is much more pleasurable than a kick in the gut. (George Walker IV/The Tennessean via Imagn Content Services, LLC)

Welcome back to the most anticipated segment of the RotoRob 2021 Fantasy Football Draft Kit: our running back cheat sheet.

2. Derrick Henry, Tennessee Titans (7): The Big Dog, who is capable of knocking defenders on their ass (see video below), has led the NFL in rushing touchdowns and rushing yards in each of the last two seasons. In 2020, Henry finished as Fantasy’s third highest scoring running back despite catching just 19-of-31 targets for 114 yards. We recommend supplementing him with a high-PPR value player.

3. Christian McCaffrey, Carolina Panthers (2): McCaffrey is a true every-snap running back that should benefit from an upgrade in offensive environment. However, he has unusual pitfalls compared to his peers on this list. We worry HC Matt Rhule over-invested in the passing attack, possibly cannibalizing McCaffrey’s garbage time points; further, we worry about McCaffrey’s commitment to football as we discussed in our Carolina Panthers 2021 Preview.

4. Austin Ekeler, Los Angeles Chargers (11): The unexpected rookie eruption from Justin Herbert propelled all phases of the Chargers offense to DEFCON 1. Ekeler is easily our favourite under-valued running back in the current Fantasy landscape. We recently discussed the huge offensive line changes and how this clears a path for the Chargers to become a top five offense in our Los Angeles Chargers 2021 Preview.

5. Alvin Kamara, New Orleans Saints (5): New Orleans’ quarterback turnover is a worthy concern, but Kamara will remain the offensive focal piece of HC Sean Payton‘s offense. We expect Kamara’s reception and efficiency through the air to regress but he’ll retain the lion’s share of work in the backfield.

6. Clyde Edwards-Helaire, Kansas City Chiefs (NR): CEH underperformed his ADP in 2020, but we expect a monstrous bounce back year from him for a couple of reasons: (a) huge upgrades at offensive line especially in short yardage situations; and (b) Damien Williams was shipped off to Chicago and there’s been no redistribution of his touches.

7. Saquon Barkley, New York Giants (1): When the season begins, Barkley will be nearly a full calendar year removed from an ACL/meniscus tear. He should, theoretically, excel in the Giants’ skill-laden offense. However, we are extremely concerned with team beat writer Jordan Raanan‘s report on Barkley’s delayed medical operation, and possible limitation in the opening weeks of the new season.

9. Aaron Jones, Green Bay Packers (12): Uncertainty over Aaron Rodgers‘ decision to play in the upcoming season is causing wide deviations on Jones’ ADP. Jones has made a living at being efficient and operating as the team’s WR2, but, like Kamara, we expect Jones’ receptions to regress. However, Jones will retain his touches on the ground, despite A.J. “Quadfather” Dillon lurking behind him.

10. Joe Mixon, Cincinnati Bengals (6): The traditional of Bengal management promoting Mixon as a true every-snap back has begun… and we are buying this year. Under Joe Burrow, Cincinnati threw almost 40 times a game, nearly supplanting Dak Prescott and the Cowboys as the most friendly game script team in Fantasy. Mixon averaged 16.6 points per week (10th) before heading to IR in the sixth game of the season last year.

11. Najee Harris, Pittsburgh Steelers (NR): The most important thing to remember when drafting Harris: do not overthink. This powerful looking rookie was taken in the first round by the Steelers, and the organization has a history of promoting its running backs to stardom a la Le’Veon Bell in his prime.

13. Mike Davis, Atlanta Falcons (NR): Davis is the most under-valued running back in Fantasy this year. The Falcons have longed for a true RB1 and they are expected to use him as such. The departure of Julio Jones frees up 100+ targets to be distributed between Calvin Ridley, Kyle Pitts and Davis. And with no significant competition behind him, former Panther Davis should thrive.

14. Antonio Gibson, Washington Football Team(NR): Washington starter Gibson is an enigma. Despite the upgrades in all offensive positions, especially quarterback, he was poised to have a Christian McCaffrey-esqe sophomore season… if J.D. McKissic was cut. We recommend pairing a risky asset like Gibson with an established running back like Henry.

15. Nick Chubb, Cleveland Browns (8): Chubb possesses a Derrick Henry-style of running, is the primary back to a top three rushing offense and is a top five pure runner in the league. However, his lack of receiving chops holds him back. In PPR, Chubb must continue to compensate for limited receiving work with rushing efficiency and touchdown scoring, but we have our concerns that Cleveland will shift more into an air-based attack this year.

French-Armenian singer Charles Aznavour was active from 1933 until his death in 2018. In 1987, he released the compilation album 20 Chansons d’or, which includes “La Boheme,” his signature song from 1965, co-written by French lyricist Jacques Plante.

By Lucas Chan
This entry was posted on Monday, July 5th, 2021 at 7:32 pm and is filed under 2021 Fantasy Football Draft Kit, Cheat sheets, FOOTBALL, Lucas Chan. You can follow any responses to this entry through the RSS 2.0 feed. Both comments and pings are currently closed.