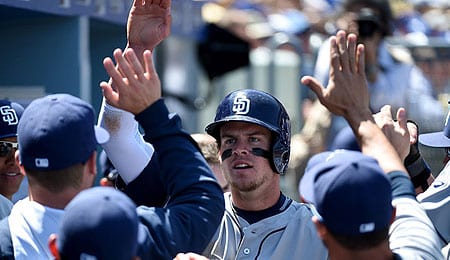 Wil Myers (centre) has become a key cog in the Padre attack. (Eastvillagetimes.com)

Welcome back to another of our 2016 Fantasy baseball cheat sheets. Need a first baseman for your Fantasy baseball team? While you marvel at how the Cubs could win a game in which they used three different pitchers in the outfield, we look at who we expect to be the top 45 players at the position for the remainder of the season. Special thanks to JB (@JBsFantasyHelp) for his excellent work with the rankings.

1. Paul Goldschmidt, Arizona Diamondbacks (1): Goldy’s home run power has waned so far this season and he’s not molesting lefties the way he usually does.

2. Anthony Rizzo, Chicago Cubs (5): Rizzo has upped his walk rate to career best levels, giving Cubs fans yet another reason to love one of their core young talents.

3. Miguel Cabrera, Detroit Tigers (3): Miggy’s stayed healthy so far this season and while the second half power outage last year was worrisome (three homers after the break), he’s addressed that this year as he delivers yet another productive effort.

4. Edwin Encarnacion, Toronto Blue Jays (4): Double-E’s been durable this year — great news for a dude that has only reached 150 games in his career once. His peripherals are on the decline (although a red-hot June helped turn that around), but he should easily top 30 dingers for a fifth straight season.

6. Eric Hosmer, Kansas City Royals (22): Hosmer was a World Series hero last year and he’s kept the party going this season, heading towards a career year despite the fact he’s not scoring as many runs.

7. Jose Abreu, Chicago White Sox (2): Abreu’s extra-base power has really dried up so far this season, but we’re confident a turnaround is coming shortly, given that the average distance of his non-groundball hits has not dropped much from last year when he put together a second straight 30-homer campaign.

8. Freddie Freeman, Atlanta Braves (7): Freeman’s extra-base pop has dipped a bit this year, and he’s really struggling to drive in runs for such an awful team.

10. Joey Votto, Cincinnati Reds (11): This Toronto native has stayed healthy the last couple of years, but after a huge 2015 he struggled to hit for average early this season, at one point sitting over 90 points below his career average. The good news is, Votto is coming around lately, batting .319 in June.

11. Wil Myers, San Diego Padres (96 in OF): Three years ago, Myers was being hyped as the next big thing in Fantasy baseball. But after a stellar rookie effort, injuries and ineffectiveness knocked him down several pegs. And then there was the trade to the Padres. This season, however, he’s staying healthy and delivering on his promise in what’s shaping up to be his most productive season. Myers also qualifies in the Outfield.

12. Brandon Belt, San Francisco Giants (15): Belt has established himself as a fixture in San Francisco and while it’s disappointing his speed has dried up this year, his career best slugging percentage is making up for that.

13. Albert Pujols, Los Angeles Angels (8): Pujols has stayed healthier the past couple of seasons, but seems to be in decline at this stage of his career. Still, he’s picking up the pace as the first half winds down.

14. Adrian Gonzalez, Los Angeles Dodgers (6): AGon’s home run power has gone AWOL so far, but he still hits for a fine BA. He got off to a surprisingly unproductive start considering how great a job Chase Utley is doing in getting on base, but Gonzalez is turning it on lately, really improving his work with runners in scoring position.

15. Mark Trumbo, Baltimore Orioles (12): Trumbo has stayed healthy in his first season in B-More and is currently tied for the MLB lead in dingers despite a career worst K rate. He also qualifies in Outfield.

16. Carlos Santana, Cleveland Indians (17): Santana remains in his power prime and is currently on pace to substantially top his career high in homers.

17. Logan Forsythe, Tampa Bay Rays (44 at 2B): Forsythe, a compensation pick by the Padres in 2008, will be hard-pressed to match his career-best homer output from 2015, mostly because he was hurt this season. But from a slash line perspective, he’s never looked better. Forsythe also qualifies at second base.

18. Hanley Ramirez, Boston Red Sox (17 at OF; 2 at SS): Ramirez is enjoying a more productive season and has already nearly matched his steal total from last year, but he sure is drawing a lot of fire from Red Sox Nation.

19. Ryan Zimmerman, Washington Nationals (54 at OF; 10 at 3B): As we warned keeper league owners last year, Zimmerman now only qualifies at first base. His hitting has really gone downhill the last couple of years, and he’s not going yard as often as he did last season. Zimmerman is no longer an RBI machine; of course, hitting better than .179 with RISP might help.

20. Chris Carter, Milwaukee Brewers (2 at DH): This home run beast keeps mashing the long balls, and he’s really picked up the pace recently. If Carter stays healthy as he has so far this year, he’ll likely reach 40 bombs for the first time.

By RotoRob
Tags: Rankings, San Diego Padres, Wil Myers
This entry was posted on Tuesday, July 5th, 2016 at 1:44 pm and is filed under 2016 RotoRob MLB Draft Kit, BASEBALL, Cheat sheets, Jordan Branson, RotoRob. You can follow any responses to this entry through the RSS 2.0 feed. Both comments and pings are currently closed.