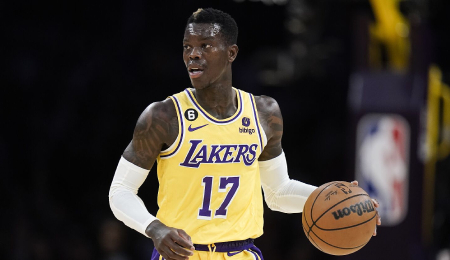 Welcome back to another week of Fantasy basketball. With U.S. Thanksgiving here, we’re at one-fifth mark of the season. Now’s the time to raid the waiver wire.

This week, Kevin Durant passed Kevin Garnett and moved into 18th place all-time in scoring; Patrick Beverley got hit with a three-game suspension for doing this to Deandre Ayton (opening a Fantasy opportunity, see below); and the Clippers are still missing both Kahwi Leonard and Paul George (again, creating an opening for sharp owners).

Dennis Schroder, PG, Los Angeles Lakers (ESPN: 23.7 per cent; CBS: 35 per cent): It’s been a few years since we last checked in on Schroder, and he’s been in decline since then. However, he’s earned a temporary boost in value with Patrick Beverley suspended until the end of the month and, in his first start of the season, Schroder delivered a decent effort (nine points, five assists, three boards and a steal in 29 minutes — see video below). Schroder still knows how to get to the line, and while he’s not the shooter he once was, don’t forget how quick this dude was when Atlanta drafted him out of Germany.

Terance Mann, SG/SF, Los Angeles Clippers (ESPN: 3.3 per cent; CBS: 4 per cent): Mann is starting and seeing extra PT with Leonard (ankle), George (hamstring) and Luke Kennard (calf) all out indefinitely, and he’s taken advantage, scoring at least 16 points in back-to-back games while flashing throw-it down skills and the type of athleticism that led the Clippers to draft him in the second round in 2019. Mann’s bucket count is up this month, and he’s proven he’s one of the few durable players on the team, so don’t sleep on him in deeper leagues.

Paul Reed, SF/PF, Philadelphia 76ers (ESPN: 1.1 per cent; CBS: 4 per cent): Reed makes for a nice short-term add in deep formats while Joel Embiid (foot) is out. Reed’s PT has waned in the last couple of games thanks to foul trouble, but we got a sense of what he can do on Tuesday (19 points, 10 boards, three steals and two blocks). He hasn’t shot as well this season, but has proven from time to time to be a big contributor off the Sixer bench.

Deni Avdija, SF/PF, Washington Wizards (ESPN: 4 per cent; CBS: 29 per cent): We pimped Avdija in late-February, and he wound up having his two best scoring months of the season after that. He’s worth another look now given the all-around skills he’s flashing (double-double on Sunday, one board shy of a trip-dub on Wednesday and five blocks over the last three games). Looking for a dude that can help you with a lot of things? Avdija’s your man.

Tyus Jones, PG, Memphis Grizzlies (ESPN: 8.3 per cent; CBS: 48 per cent): Jones will help you a bit in scoring, but it’s his recent run of assists (at least five in five of the last six games) that really intrigues us. He hasn’t been getting to the line as much lately, but seems to be gaining in durability in recent seasons, and that’s an underappreciated asset to consider.

Thaddeus Young, PF, Toronto Raptors (ESPN: 5 per cent; CBS: 11 per cent): Old man Young has had some decent seasons, but has generally been meh — even in the virtual world. However, with the Raps dealing with tons of injuries, he’s recently shown that he’s got something left in the tank, scoring at least 12 points in four of the last five while consistently flirting with double-digit boards. On Wednesday, he played his 1,100th career game yet still looked like the team’s top player, hauling down eight rebounds, including five off the defensive glass.

John Konchar, SG, Memphis Grizzlies (ESPN: 7.5 per cent; CBS: 31 per cent): Konchar has been a hot pickup recently with Desmond Bane (toe) out for almost another month. Konchar was dealing with an injury (calf) of his own, yet was able to play on Friday, and once again flirted with a double-double despite seeing a bit less PT. His shooting from downtown has really improved this month (3-for-5 from beyond the arc on Friday) and he’s been getting more of a chance to start than ever before in what’s shaping up as a breakout season. This isn’t the first time Konchar has caught our eye, but in this instance it’s more worthy of Fantasy consideration.

Caleb Martin, SG/SF, Miami Heat (ESPN: 8.6 per cent; CBS: 27 per cent): Heading into 2020-21, we suggested Martin could be in line for a bigger role to begin the season, but that didn’t pan out and he really never got enough PT to offer value. However, he got more of a shot in Miami last season, and has morphed into a full-time starter this season. How about back-to-back games with at least 20 points? How about 50 per cent shooting in November from a swingman? Martin’s touches are way up this season, and he’s really delivered some clutch performances, so go hit that wire and grab him.

Mid-’60s L.A. garage band The Starfires put out one of the most desired 45s of its era with the gritty “I Never Loved Her.” This band didn’t leave us much, but man, this tune made it worthwhile.

By RotoRob
This entry was posted on Saturday, November 26th, 2022 at 1:25 pm and is filed under BASKETBALL, RotoRob, The Wire Troll. You can follow any responses to this entry through the RSS 2.0 feed. Both comments and pings are currently closed.