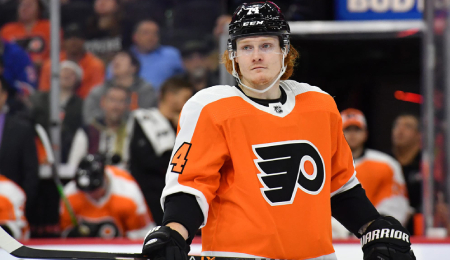 Welcome back to another week of Fantasy hockey. We’re nearing the latter stages of November, over a fifth of the way into the schedule, so keep mining the wire for goodies.

This week, the red-hot Devils just keep winning, even beating the Leafs for the first time in four and a half years; Patrik Laine will miss nearly four weeks thanks to an ankle injury; and this year’s Hockey Hall of Fame class has a very Canucks and Swedish feel to it.

Owen Tippett, RW, Philadelphia Flyers (ESPN: 2.9 per cent; CBS: 14 per cent): The big prize that came to Philly in last season’s Claude Giroux trade, Tippett brings a shooter’s mentality to the Flyers — exactly what they need. With the team’s only goal on Thursday (a PPG, to boot; in fact, he seems to have an opinion on the improvement of the Flyers PP — see video below), Tippet has now recorded points in three straight games and is boasting at a career-best 12.5 shooting percentage. The 10th overall pick in 2017 flashed some playmaking skill with the Panthers but never quite managed to break through — until now, that is. Grab Tippett while you can as it seems he’s learning to translate his big scoring numbers from junior hockey (44 goals in the OHL in 2016-17) to the NHL.

Sheldon Dries, C, Vancouver Canucks (ESPN: unowned; CBS: unowned): On Sunday, Dries finally got his first goal since his recall from the minors, but he makes for an interesting case. This dude ripped 35 goals in 54 games in the AHL last season and has a chance to move into the top six if Bo Horvat is traded as has been widely rumoured. Dries has failed to show much playmaking ability in 66 NHL games spread over five seasons (although he did log a helper with increased ice time on Friday), but we’re keeping an eye on him — especially if Horvat is shipped out.

Jake Christiansen, D, Columbus Blue Jackets (ESPN: unowned; CBS: unowned): The Columbus blueline has been decimated with several defensemen out, including star Zach Werenski, who is probably done for the season. This misfortune has created opportunities, such as Christiansen moving into the top four after making his season debut last Saturday. He’s managed five shots and an assist through his first three games and is getting way more ice time than he saw in his cup of coffee last season. This kid had 45 points in the AHL last season, so bears watching.

Jason Zucker, LW, Pittsburgh Penguins (ESPN: 23.6 per cent; CBS: 42 per cent): A few years back, we thought Zucker might wind up in Vegas in the expansion draft, but it’s a good thing the Wild kept him as he posted a career-best 33 goals the following season. He’s since been moved to Pittsburgh, where he’s been meh for a couple of seasons until now, when he’s suddenly posting nearly a point per game. Zucker has really excelled on the second line with Evgeni Malkin, racking up six points in four games before Thursday, so makes for a great pickup.

Taylor Raddysh, RW, Chicago Blackhawks (ESPN: 0.8 per cent; CBS: 9 per cent): We were bullish on Raddysh’s chances to break out after getting dealt to Chicago last season, and sure enough, he stepped up his point production. Despite slightly less PT this year, he’s off to a decent start, but could really take off and possibly become the team’s RW1 if and when Patrick Kane gets traded. Raddysh is becoming a more intriguing dynasty league option by the day.

Stefan Noesen, RW, Carolina Hurricanes (ESPN: 0.2 per cent; CBS: 4 per cent): Noesen is another relative unknown who is benefiting from injuries. Max Pacioretty (Achilles) skated Friday for the first time, but is still months away and Teovo Teravainen is now out too, so Noesen has found himself on the top line, and while he’s not producing lately, he’s got the chance, and that’s huge. Where Noesen has done well is on the power play (2-2-4), so consider that if your league rewards this category.

Nate Schmidt, D, Winnipeg Jets (ESPN: 2.6 per cent; CBS: 13 per cent): Schmidt had a fine debut with the Jets last season and while hasn’t been quite as productive so far in 2022-23, he does have a pair of goals and has seen an uptick in PT. And with Dylan DeMelo out day-to-day, Schmidt will be leaned on a bit more now, making him a decent short-term pickup.

Trevor Moore, LW, Los Angeles Kings (ESPN: 12.5 per cent; CBS: 23 per cent): Moore was shut out Friday, yet still has four points over the last three games (including a hat trick on Wednesday). But what excites us even more is that he’s now had back-to-back four-shot games. Expect him to fly off the wire this weekend, so grab him while you can.

Ilya Mikheyev, RW, Vancouver Canucks (ESPN: 3.7 per cent; CBS: 21 per cent): Mikheyev snapped a slump with an assist on Friday and is averaging 2.5 shots over the last couple of games while going +2. This guy can do a bit of everything, so hopefully he’s shaken off his November woes and is ready to produce like he did in October.

Sam Montembeault, G, Montreal Canadiens (ESPN: 4.8 per cent; CBS: 9 per cent): Thursday wasn’t one of them, but Montembeault has put up some solid efforts when he’s asked to man the Montreal net. The 26-year-old Quebec native has recorded four quality starts in six tries, the highest percentage of his career. Montembeault won’t play a ton, but can provide some value when he does.

Classic British comedy troupe Monty Python created the TV series Monty Python’s Flying Circus, which kicked off in 1969. Some of the greatest skits from the show were spun into the 1971 movie And Now for Something Completely Different, featuring “Self Defense.”

By RotoRob
This entry was posted on Saturday, November 19th, 2022 at 1:10 pm and is filed under HOCKEY, RotoRob, The Wire Troll. You can follow any responses to this entry through the RSS 2.0 feed. Both comments and pings are currently closed.