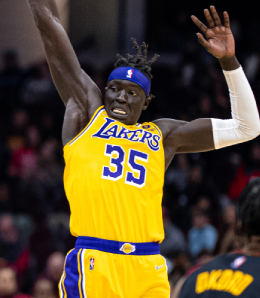 Wenyen Gabriel is starting for the Lakers. (Erik Drost)

Welcome back to another week of Fantasy basketball. We’re still inside the first 15 per cent of the season, so there are still lots of gems to be found on the waiver wire. In this installment of The Wire Troll, we offer up a few deep league injury replacement options.

This week, it’s looking like Kyrie Irving (suspension for being a douche again) will miss Brooklyn’s entire road trip; an MRI revealed an adductor strain for LeBron James (see below for the Fantasy opportunity this presents); and flipping the bird has cost Nikola Vucevic $15,000.

Wenyen Gabriel, SF/PF, Los Angeles Lakers (ESPN: 0.1 per cent; CBS: unowned): Gabriel earned his first start on Monday with James out, but returned to the bench when James came back. However, King James is now out again day-to-day, so Gabriel started on Friday, giving him a chance to provide some value as a short-term deep league or DFS option. Gabriel has posted solid numbers in limited minutes (12 points and 8.6 boards per 36 over the last weeks), but other than three steals, didn’t do a ton in his first start. On Friday, his PT was limited but he did manage eight points and two blocks. Still, his FT shooting has improved since joining the Lakers and he’s shot very well from the field this season. Coming out Kentucky, Gabriel had great size for a 3/4, and the potential to go with it. However, he wasn’t exactly NBA-ready given how much strength he needed to add. Still, Gabriel could be a late-bloomer as a face-up power forward if given enough PT, so he bears watching. If nothing else, he provides the team a spark with his hustle (see video below).

Torrey Craig, SF/PF, Phoenix Suns (ESPN: 0.6 per cent; CBS: 4 per cent): In late-January, we recommended Craig as an injury replacement option, and the pick delivered mixed results as he was inconsistent down the stretch. Now, another injury has opened the door again as he’s starting with Cameron Johnson (knee) out 1-to-2 months. Craig has been seeing 22+ MPG over the last week, and while he hasn’t exactly been lighting the world on fire, he’s flirted with double-doubles and on Friday he offered a well-rounded stat line. Still, if his FT shooting regresses to the norm, he has slightly more scoring potential than he’s shown of late. Craig has already earned more starts this season than he did during his time in Phoenix last season, so if the minutes can regularly get above the 25 range, he’ll provide some deep league value for the next few weeks.

Payton Pritchard, PG, Boston Celtics (ESPN: 0.3 per cent; CBS: 1 per cent): Malcom Brogdon (hamstring) is hurting, giving Pritchard a chance to step up for the short term. Pritchard, now in his third season, has played sparingly so far in 2022-23, and really has seen his role reduced in back-to-back campaigns after such a solid rookie effort. This kid has some potential, but his shooting has really slipped in the last two seasons. On Friday, Pritchard played just 16 minutes (in a lopsided victory), but poured in 11 points with five boards and — most importantly — nailed 5-of-6 from the floor. Perhaps this opportunity will spark a recovery, making him worth a flier in very deep leagues.

English singer Petula Clark — who will turn 90 on Tuesday — has had one of the longest careers ever, originally starting in 1940. Here’s “Don’t Give Up,” the second single from her 1968 album, Petula. The track was written by Tony Hatch (who also worked with Chubby Checker) and Jackie Trent (who also wrote songs for Frank Sinatra).

By RotoRob
This entry was posted on Saturday, November 12th, 2022 at 1:50 pm and is filed under BASKETBALL, RotoRob, The Wire Troll. You can follow any responses to this entry through the RSS 2.0 feed. Both comments and pings are currently closed.