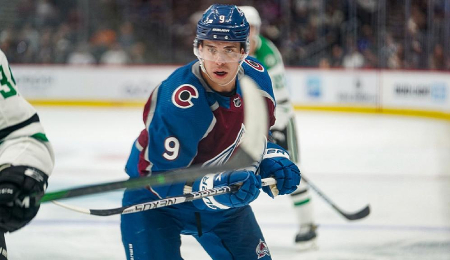 Evan Rodrigues has shaken off a slow start. (NHL.com)

Welcome back to another week of Fantasy hockey. We’re into November now and nearly 15 per cent of the way through the season — lots of time for you to take advantage of the waiver wire.

This week, the Bruins signed defense prospect Mitchell Miller, who has done some heinous things in his past; the Senators are for sale — as long as they remain in Ottawa; and Alex Ovechkin has tied Gordie Howe for most goals ever scored with one team.

Evan Rodrigues, C, Colorado Avalanche (ESPN: 8.8 per cent; CBS: 19 per cent): A Wire Troll All-Star in 2021-22, Rodrigues parlayed a career season into a one-year, $2-million deal with the Avalanche. Faced with the daunting task of replacing departed free agent Nazem Kadri, Rodrigues got off to a slow start but is rolling now with four goals and an assist in the last six games. Surprisingly, Rodrigues is seeing even more PT in Colorado despite the team’s forward depth. For an undrafted player, he’s done pretty well for himself and he’s definitely shown a willingness to go to the greasy areas and pay the price (see video below).

Artem Zub, D, Ottawa Senators (ESPN: 5.8 per cent; CBS: 7 per cent): Zub (UBI) is currently out, but is getting close to returning. He skated Friday, and while not expected to play Saturday, he is likely to be back in action next week. Zub was off to a good start with three points in seven games before getting hurt, and he took a nice step forward last season with six goals and 16 assists while playing over 21 MPG. He’s a solid defensive blueliner who racked up 155 hits and 124 blocks last season, so if you need help in those areas in a deeper league, give him a look.

Nick Jensen, D, Washington Capitals (ESPN: 12 per cent; CBS: 25 per cent): Just under a year ago, we pimped Jensen as injuries had opened up more PT for him. It was a decent pick that looked better down the stretch when he flashed an improved offensive game. This season, Jensen has built on that and despite getting shut out in the last two games, he remains on a near 50-point pace. Meanwhile, his ice time has risen for the second straight season as he’s become the key penalty killer for the club, and he’s raised his blocks per game to 1.75.

Martin Fehervary, D, Washington Capitals (ESPN: 2.1 per cent; CBS: 7 per cent): What’s this? Another Capital defenseman? Fehervary has also seen a hike in ice time, even leading the team in 5×5 PT on Thursday while continuing to rack up tons of hits (251 last season and on pace for more this season). Fehervary flirted with double-digit goals last season, but has yet to bulge the twine in 2022-23. Still, if you’re in a deeper league that tracks hits, he’s a nice asset.

Jaden Schwartz, LW, Seattle Kraken (ESPN: 33.1 per cent; CBS: 43 per cent): A hand injury and an UBI ruined what was shaping up as a nice comeback effort for Schwartz last season. However — despite a two-game drought — he’s off to an even better start this season with five goals and five assists through the first dozen contests, leading the Kraken in goals and points. Grab Schwartz in all formats and hope he can stay healthy.

American singer Bob Dylan is a living legend, starting his career in 1961 and still going strong today. In 1969, he released his ninth album, Nashville Skyline, which included the country-rock tune “To Be Alone With You,” the first song recorded for the disc.

By RotoRob
This entry was posted on Saturday, November 5th, 2022 at 2:19 pm and is filed under HOCKEY, RotoRob, The Wire Troll. You can follow any responses to this entry through the RSS 2.0 feed. Both comments and pings are currently closed.