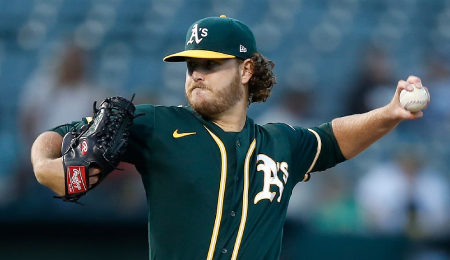 Cole Irvin has put together another solid campaign. (MLB.com)

Very little has gone right for the Oakland Athletics this season, but that should come as no surprise. After all, in the wake of an 86-win season in 2021, the team has dealt away virtually anyone resembling a legitimate major league talent, moving into full-on rebuild (read: cost-cutting) mode.

One of the few promising developments for the A’s this year has been Cole Irvin‘s consolidation of a breakout in 2021 that saw him make our Wire Troll All-Star Team thanks to his first double-digit win season.

Irvin has the size, athleticism and right mental approach to be a successful MLB pitcher, but he’s never been one to pile up many strikeouts.

And while he maintained a sub-3.00 ERA as recently as early August, things have not gone well since, punctuated by the bitch-slapping he took at the hands of the Mets on Friday (see video below for the pitch he’s like back from that one).

Strangely, other than a superb July, Irvin has gotten worse as the season has progressed, and is really getting pounded this month (.330 OBA). It’s not dissimilar to last year, when his worst months were August and September, so clearly the heavier workloads he’s endured the last two seasons are taking their toll down the stretch.

Still, there’s a lot to like about what Irvin has done this year, solidifying his status as a must-own AL-only league asset and decent option in deeper mixed formats.

He’s slightly tweaked his pitch mix this year, throwing fewer sliders, changeups and fastballs, replacing those with significantly more curveballs and a new cutter (that he learned on social media!) that he’s thrown into the mix periodically.

Throwing fewer sliders has been a trend for Irvin since he came into the bigs as he’s used the pitch less and less often each season. But the spike in the Uncle Charlie is a new development, one we’re not sure is working. His curve resulted in 6.0 runs above average — the pitch’s worst showing yet.

Meanwhile, Irwin’s fastball was a plus offering for the first time, while the changeup remained a successful pitch.

Frankly, we’d rather see him reduce the curveball usage next year, while increasing the use of his slider — which, while not a plus pitch, was closer to average than ever.

There may yet be upside in Irvin’s game, and another slight alteration in his pitch selection could help him get there in 2023.

Given his inability to throw the ball by major league hitters at a better rate, his Fantasy appeal will always be capped, but he’s already a solid asset, one capable of offering a bit more in our estimation.

Donovan melded several types of music to create a very unique sound. His success started very early as his first album, What’s Bin Did and What’s Bin Hid, came out just four days after he turned 19. From this effort comes “Donna Donna,” one of the few songs on this disc that he didn’t write.

By RotoRob
This entry was posted on Monday, September 26th, 2022 at 2:11 pm and is filed under BASEBALL, Player profile, RotoRob, Scouting Report. You can follow any responses to this entry through the RSS 2.0 feed. Both comments and pings are currently closed.