The Wire Troll: Jordan Lyles Racking Up Wins in B-More 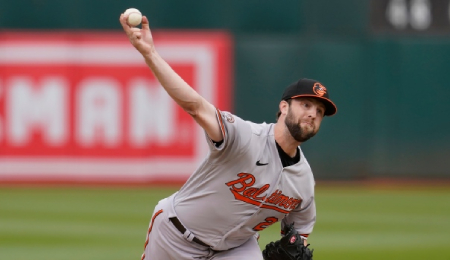 Jordan Lyles is having a positive impact on the O’s. (The Canadian Press)

Welcome back to another week of Fantasy baseball. September is nearly here, so your final chance to make a move has arrived. Get to it, and use that wire!

This week, Seattle signed budding superstar Julio Rodriguez to an extension that could be worth up to $470 million; speaking of big contracts, the Phils finally got Bryce Harper (thumb) back, but lost Zack Wheeler (forearm); and Cuban pitching prospect Luis Morales could set a new record with his bonus.

Jordan Lyles, SP, Baltimore Orioles (ESPN: 10.4 per cent; CBS: 35 per cent): It’s been a few years since we last recommended Lyles, and that turned out less than ideal as he pulled a Jekyll and Hyde act down the stretch. It’s mostly been more inconsistency since, but he took a step forward last year and has somewhat built on that this season as he’s one of fewer than 40 pitchers who have at least nine wins. Lyles has been especially useful since the beginning of July, earning five wins and keeping his ERA well under 4.00 over this stretch. He’s really limiting the walks this month, and finds himself with a non-losing record for the first time since 2019. Baby steps, right? At the very least, Lyles is an innings eater — which is rare these days — and has racked up 10 quality starts among his 26 outings. Once upon a time a supplemental first round pick by Houston (2008), he’s stuck around long enough to pitch in 315 MLB games at a generally substandard but periodically — like now — somewhat useful level. Lyles had had trouble with lefties this season (875 OPS); for instance, Josh Lowe is 4-for-8 against him, but did whiff once (see video below).

Mike Ford, 1B, Los Angeles Angels (ESPN: 0.1 per cent; CBS: unowned): Jared Walsh is out for the season after landing on the 60-day IL with thoracic outlet syndrome, leaving the first base job for Ford, who just had his contract purchased from Triple-A. Ford has bounced around this season, but in batting cleanup and knocking two hits in his debut, he’s got a real chance to stick in L.A. for the rest of the season. He opened eyes when he smoked 12 homers in 50 games as a Yankee rook in 2019, but hasn’t done much since. Ford’s pop makes him intriguing in deeper AL-only leagues.

Bailey Falter, RP/SP, Philadelphia Phillies (ESPN: 2.5 per cent; CBS: 3 per cent): Falter was recalled last week, but now that Zack Wheeler (forearm) is on the IL, the stay will likely be extended, and why not? Falter has pitched well in both starts, and while Friday’s outing was only against the Pirates, a 3.00 ERA through two outings works. Give him a look in NL-only leagues.

Brandon Hughes, RP, Chicago Cubs (ESPN: 3.2 per cent; CBS: 10 per cent): Okay, so Hughes had a rough time on Friday, but prior to that he had looked really great closing games for the Cubs and seemed to have usurped Rowan Wick for the job. That may still be up in the air, but either way, Hughes has been nearly unhittable since the end of June.

Jose Iglesias, SS/2B, Colorado Rockies (ESPN: 21.2 per cent; CBS: 34 per cent): A candidate for our 2020 Wire Troll All Star Team, Iglesias regressed last year, but has bounced back this season in Colorado. He doesn’t offer much pop or speed, but if you need help in an OBP league, the 10-year vet can provide some value.

Cade Cavalli, SP, Washington Nationals (ESPN: 6.7 per cent; CBS: 26 per cent): No. 53 on our Top 100 Prospects list this spring, Cavalli made his MLB debut on Friday. It didn’t go great, but judging by how hard he was to hit at Triple-A, there’s major potential here. The Nats waited quite some time to bring Cavalli up, but that will likely help him in the long run. This kid can really bring the heat, so if he starts to use his four-seam fastball more, look out.

Rafael Montero, RP, Houston Astros (ESPN: 13.1 per cent; CBS: 33 per cent): Ryan Pressly (neck) landed on the IL this week, opening the door for Montero to earn some saves. Montero was projected to close for Seattle last season, but only earned seven saves. Finally healthy, he’s already bagged eight this year with the chance to earn more.

Kyle Bradish, SP, Baltimore Orioles (ESPN: 0.6 per cent; CBS: 5 per cent): Bradish was simply molested earlier this season, but since returning to the Orioles in late-July, he’s been very good, lowering his ERA in six straight appearances, including eight shutout innings against the powerful Astros on Friday. With a 3.21 ERA and just 30 hits allowed in 33 2/3 IP over this stretch, he deserves some Fantasy love.

Jake Fraley, OF, Cincinnati Reds (ESPN: 11.6 per cent; CBS: 33 per cent): After Fraley dropped off our Top 100 Prospects list last year, things looked grim. Yes, he hit better last year, but hardly looked like a former prospect. This month, however, Fraley has come alive with power (five homers) and patience (.360 OBP) while recently getting a chance to lead off. It’s time to give him another long look.

American singer Bobby Darin dabbled in many different musical forms before persistent poor health spelled his demise at age 37. Here’s another track from the 1963 7-inch EP Bobby Darin Presents, “18 Yellow Roses,” also the title of a full album he released the same year.

By RotoRob
This entry was posted on Saturday, August 27th, 2022 at 3:46 pm and is filed under BASEBALL, RotoRob, The Wire Troll. You can follow any responses to this entry through the RSS 2.0 feed. Both comments and pings are currently closed.