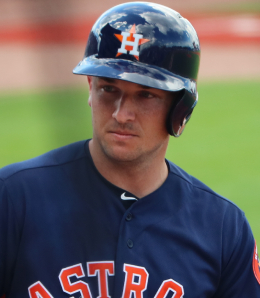 Alex Bregman has been on fire this month. (D. Benjamin Miller)

Based on his performance in 2018 and 2019, Houston Astros third baseman Alex Bregman seemed like one of the AL’s great young talents and a budding superstar.

In 2018, he led the majors with 51 doubles en route to a fifth place finish in MVP voting. The following season, Bregman was a very close runner up to Mike Trout for MVP honours after leading baseball with 119 walks as part of a massive career season.

Unfortunately, his OBP plummeted in 2020 and he was even worse last season as his power dropped dramatically. In fairness, Bregman missed a ton of time in 2021 thanks to a quad woe and a hand injury.

This year, Bregman has bounced back (especially power-wise; see video below) and is enjoying his finest season since that monster 2019 campaign. It begs the question, where does the 28-year-old, seven-year vet fit among the all-time greats that have donned an Astro uni?

With yet another productive season under his belt, Bregman is just 74 RBI — probably less than a year away — from tying Ken Caminiti for 10th place all-time in team history. While Caminiti’s best (and most juiced?) seasons came in San Diego, don’t forget that he did play 1,085 games over 10 seasons in Houston, so matching him will be a big milestone for Bregman.

And while ribbies may not mean much in the grand scheme of things (other than playing for a long time, batting in the right spot in a lineup, and having the fortune of hitting behind good OBP dudes), Bregman is even closer to the top 10 Astro leaders in WAR — a much clearer indication of a player’s value.

With 3.8 so far this season (using Baseball Reference’s WAR model), he finds himself at 29.8 career — just 0.6 behind Bill Doran for 10th place. That’s a highly achievable goal for this season for Bregman, with Joe Morgan just 0.2 ahead of that in ninth place also a real possibility.

Jeff Bagwell (79.9) and Craig Biggio (65.5) are probably out of reach in the top two spots, but given Bregman’s age and trajectory — if he stays healthy, remains in Houston (he’s signed through the end of 2024, reaching unrestricted free agency the following season) and continues at this level of productivity — he’s perhaps around six years away from chasing down Jose Cruz (51.4) for third place in team history. Even if Bregman begins to taper off in his early 30s, he should be on Lance Berkman‘s tail at fifth place with 48.1. (Note that Jose Altuve is currently in sixth place with 44.9, so that order may soon change.)

Houston’s first round pick in 2015, Bregman came into the majors with a man’s body, tremendous patience and an elite hit tool. He’s more than lived up to the billing throughout his career.

While Bregman took an 0-for-3 on Saturday, that kind of performance has been rare footage of late. He had gone off for multiple hits in three of the previous four as part of a massive August (.372/.446/.686), and really, he’s been rolling since the All-Star break.

It’s a treat to see Bregman productive again and back to being a top six Fantasy option at the hot corner after a couple of down seasons. If he’s truly behind the health issues that limited him over that stretch, he’ll likely be making a case for the Mount Rushmore of Astro greats as we near the end of this decade.

Hailing from Ferndale, Michigan, The Spinners churned out a ton of hits over the years. In 1975, they released their sixth studio album, Pick of the Litter, which included “I Don’t Want to Lose You.”

By RotoRob
This entry was posted on Sunday, August 28th, 2022 at 5:06 pm and is filed under BASEBALL, Player profile, RotoRob. You can follow any responses to this entry through the RSS 2.0 feed. Both comments and pings are currently closed.