The Wire Troll: Nolan Jones Getting on Base for Guardians 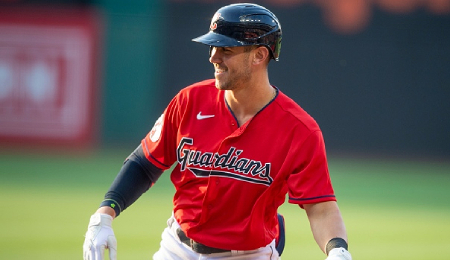 Nolan Jones is impressing with his work at the plate. (The Canadian Press)

Welcome back to another week of Fantasy baseball. The All-Star break — followed by the unofficial second half — is nearly here, so keep your foot on the gas and milk that waiver wire.

This week, the Royals had to leave 10 unvaccinated players behind (including Andrew Benintendi and Whit Merrifield) for their trip to Toronto; Pete Alonso will be going for his third Home Run Derby title; and Jacob deGrom‘s rehab has him on track to return to the bigs in a week or so.

Nolan Jones, 3B/OF, Cleveland Guardians (ESPN: 10.3 per cent; CBS: 43 per cent): After ranking No. 51 a year ago, Jones dropped off our 2022 Top 100 Prospects Rankings. However, he’s bounced back and was hitting extremely well at Triple-A this season, and then somehow has taken that up a notch since his recall to the bigs, drawing another pair of walks on Thursday to take his OBP up to an eye-popping .481. Jones swiped 14 bags over 122 Triple-A games the last two seasons, but we’re still waiting to see that show up in the majors. A second round pick (55th overall) in 2016, he mostly played third base in the minors, but has focused on outfield this year to help expedite his arrival in Cleveland. Jones has the size, elite arm and power (check out him leaning into his first MLB dinger in the video below) to stick in the Show, so grab him while you can.

Clarke Schmidt, RP/SP, New York Yankees (ESPN: 0.4 per cent; CBS: 4 per cent): The Yankees were already figuring out how they could limit second-half innings for Luis Severino and Nestor Cortes, but that plan may have to be altered now that Severino (lat strain) has hit the IL. Schmidt figures to be part of the solution, as he’s been starting (and pitching well) at Triple-A even if he worked mostly out of the arm barn when he was up with the Yankees earlier this season. He’s gotten better each season, and is at least as good as an MLB replacement level player, with clear upside. Depending how long Severino is out, Schmidt could be a surprisingly useful second-half asset.

Angel Zerpa, SP, Kansas City Royals (ESPN: unowned; CBS: unowned): Every time the Royals have brought Zerpa up, he’s answered the call. Last season, he made one start (five innings, no earned runs, four Ks), and this year after being recalled from Double-A, he earned the win in his debut on Monday with two shutout innings, and then bagged another win just three days later with a mostly flawless five-inning outing. Venezuelan lefty Zerpa has done a great job limiting baserunners, and while — admittedly — his results have been rather fortuitous, but he’s given himself a chance to get a longer look, so Fantasy owners should pay attention.

Taylor Walls, SS/2B/3B, Tampa Bay Rays (ESPN: 0.3 per cent; CBS: 2 per cent): Walls sat on Friday, but he has manned shortstop for the Rays since Wander Franco went down (hamate surgery, 5-to-8 weeks). Now, Walls isn’t exactly tearing it up offensively, but he’s showing signs of life (4-for-10 with a double and homer over the last three games) and has been productive enough to consider in deeper AL-only leagues. For what it’s worth, Rays insiders believe he’s trending up.

Cesar Hernandez, 2B, Washington Nationals (ESPN: 9.6 per cent; CBS: 20 per cent): Hernandez has regressed in recent seasons, so small wonder it’s been nearly five years since we last pimped him. Worse yet, after cranking a career-high 21 dingers last year, he’s failed to go yard this season. So why are we recommending him? For starters, he’s durable and seems to be cemented into the National lineup (he’s tied for third in games played in the majors). Secondly, we know he’s a better hitter than he’s shown recently, and perhaps that’s starting to manifest itself (four hits over the last four games, including a single and double on Friday). If you need help at the keystone corner, Hernandez could provide an answer.

Jose Cisnero, RP, Detroit Tigers (ESPN: 0.1 per cent; CBS: unowned): Way back in 2013, we pegged Cisnero as a saves candidate, yet it took him until last year to close his first MLB game. The big Dominican righty just came off the 60-day IL (although he’s now on the bereavement list), and given that he’s shown he can handle a high leverage role (18 holds last year), we’re intrigued because rumours persist that Detroit will deal away some key relievers. If that happens, Cisnero will immediately elevate into a very important role.

Pete Crow-Armstrong, OF, Chicago Cubs (ESPN: 0.2 per cent; CBS: NA): Crow-Armstrong was the Mets’ first rounder (19th overall) in 2020, but dealt to the Cubs last summer in the Javier Baez trade. Crow-Armstrong showed superb extra-base power at Class-A this season, earning a late-May promotion to High-A, where his pace has slowed yet he continues to rack up the total bases. PCA’s breakout has plenty of Cubs fans excited about the team’s future outfield (which will also include Brennen Davis and Owen Caissie).

German singer Nico acted in several movies in addition to her work as a model and singer. Here’s another track from her Live in Tokyo disc: “60/40,” originally released on 1981’s Drama of Exile.

By RotoRob
This entry was posted on Saturday, July 16th, 2022 at 2:25 pm and is filed under BASEBALL, RotoRob, The Wire Troll. You can follow any responses to this entry through the RSS 2.0 feed. Both comments and pings are currently closed.