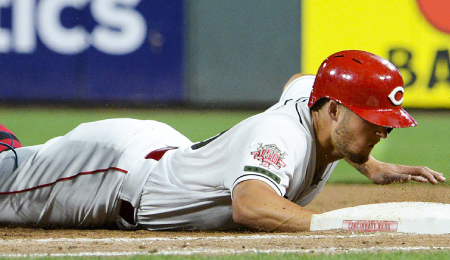 Welcome back to another week of Fantasy baseball. We’re well into July now and officially passed the halfway point this week, so you better be getting what you can out of the waiver wire.

This week, all-time greats Albert Pujols and Miguel Cabrera were added to the All-Star Game rosters; Jurickson Profar was involved in a terrifying outfield collision and had to be carted off the field; and Atlanta’s Spencer Strider became the first rookie since 1900 to punch out at least 11 batters while allowing two or fewer hits in consecutive starts.

Nick Senzel, OF, Cincinnati Reds (ESPN: 4.7 per cent; CBS: 21 per cent): Senzel started 2020 strong, but wound up missing plenty of action and struggling while active. Last year was slightly better, although he again missed most of the season and was awful on the basepaths. Could this once stud prospect finally be finding himself now? His speed has returned, he’s flashing power (see video below), and after a two-hit (one double) showing on Friday, he’s batting .370 in July and recently strung together a 13-game on-base streak. Senzel is seeing more fastballs than at any time since his debut, and he’s taking advantage, doing better work against the pitch this season. The former Cape Cod League MVP could be ready to live up to the hype.

Jose Azocar, OF, San Diego Padres (ESPN: unowned; CBS: unowned): Azocar had been operating as a part-time player, but he’s going to play every day for a while after Profar landed on the IL thanks to a concussion. Azocar hasn’t done much lately to warrant your attention, but he is batting .300 in limited duty this month, so in very deep NL-only leagues let’s see what he can do with regular at-bats. He’s hit changeups very well, but has struggled with fastballs and sliders.

Dennis Santana, RP, Texas Rangers (ESPN: 1.6 per cent; CBS: 4 per cent): Santana had a false start to his career, but he’s generally gotten better and better since then. Now, with Joe Barlow pitching his way out of the closer job in Texas, Santana has as good a chance as anyone to start bagging saves, although he earned the hold Friday while Brett Martin closed the game for his first career save. Still, we really like Santana, who’s enjoying a career year and proving to be a workhorse reliever. Although his sinker isn’t as dominant as last year, he’s improved all his other offerings. There’s closer potential here.

Brayan Bello, SP, Boston Red Sox (ESPN: 9.3 per cent; CBS: 44 per cent): Bello didn’t look great in his first MLB start on Wednesday, but it’s not as if he got a lot of support. Still, Boston’s top pitching prospect did show off a nice splitter. If Bello can duplicate the groundball rates he had at Triple-A and Double-A, he’ll be a nice asset.

Victor Carantini, C, Milwaukee Brewers (ESPN: 0.5 per cent; CBS: 3 per cent): A few years back we talked about Carantini’s power potential and while we didn’t see it that year, it sure showed up in 2019. Well, it’s back now, with six dingers in his last 22 games as he’s simply destroying splitters. Carantini is also a decent defensive backstop, so give him a look in deep NL-only leagues.

Matt Manning, SP, Detroit Tigers (ESPN: 1.8 per cent; CBS: 15 per cent): A graduate of our 2021 Top 100 Prospects Rankings, Manning looked really sharp to start the season before a shoulder woe sidelined him. He’s scheduled to make a rehab start next week so will soon be rejoining the Tigers, and if he can continue to get ahead in the count (career best 69 per cent first pitch strike percentage), perhaps we will finally see him deliver on his promise.

Yonathan Daza, OF, Colorado Rockies (ESPN: 1.5 per cent; CBS: 5 per cent): Daza is an enigma. He chases pitches outside the zone too much (career worst 35 per cent O-Swing rate), yet he continues to improve as a hitter.

Darick Hall, 1B, Philadelphia Phillies (ESPN: 5.7 per cent; CBS: 27 per cent): Hall has enjoyed immediate success since being recalled by the Phillies, and although he’s cooling off a bit this month given some contact issues, he looks like a decent short-term add. Do note, though, that he may not qualify anywhere but DH depending on your league rules.

Jackson Frazier, OF, Chicago Cubs (ESPN: 0.4 per cent; CBS: 2 per cent): Two years ago, Frazier was a hot waiver wire add (when he called himself Clint). Now he’s nearly a month into his stint at Triple-A since being DFAed. However, the Cubs are expected to trade Ian Happ at the deadline and Frazier is slashing .357/.500/.429 over the last 15 at-bats after a cold start. Maybe the former top prospect will soon get another shot.

Bruce Cockburn was made a member of the Order of Canada in 1982, so he’s definitely been well recognized in his own country. In 1976, he released his seventh studio album, In the Falling Dark, featuring the jazzy/Native-inspired instrumental “Giftbearer.”

By RotoRob
This entry was posted on Saturday, July 9th, 2022 at 3:01 pm and is filed under BASEBALL, RotoRob, The Wire Troll. You can follow any responses to this entry through the RSS 2.0 feed. Both comments and pings are currently closed.