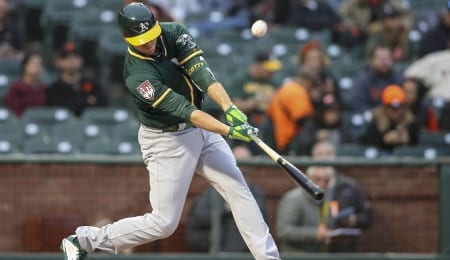 Stephen Piscotty’s grand salamis have been a highlight of the A’s fast start. (Chris Victorio|Special to S.F. Examiner)

After the A’s put up back-to-back 97-win seasons the last two years, it wouldn’t necessarily take a betting guru to predict they’d again be contenders in 2020.

But how many of you expected Oakland to blaze out of the gates to a 16-7 start (heading into action Tuesday), putting it in first place in the AL West, already 3.5 games ahead defending AL Champion Houston?

Clearly, the A’s have taken the next step, and with the season halfway point just a week away, they look like a real challenger for the AL crown.

There’s a special feeling developing around this team. On Opening Day, Matt Olson smacked a walk-off grand salami; just a week and a half later, Stephen Piscotty repeated that feat, giving the franchise a pair of walk-off grand slams for the first time in history. Further, Piscotty smoked another grand slam on Friday to tie a game the A’s went on to win in 10 innings, Magical.

Speaking of Piscotty, his power is back (even in the virtual world — see video below) after an injury-plagued and ineffective campaign in 2019. He enjoyed a major power breakout in 2018, but last year knee and ankle woes really limited him, and his numbers took a nosedive as a result.

Heading into this season, Piscotty was not even guaranteed a full-time role, and while he actually isn’t hitting as well early on, the power has returned with four doubles and four homers through his first 64 at-bats (.484 slugging percentage).

Curiously, he hit .305 as a rookie in 2015, and then .273 the following season, but has failed to reach .270 in any year since. Piscotty, a 2012 supplemental first rounder by St. Louis, is clearly not quite as good as we thought after his debut season, but neither is he as bad as he showed last year or in 2017. Still, right now he looks like a solid addition in AL-only and deep mixed leagues.

American singer Willie Hutch got his start in 1969 and remained active until his death in 2005. He was probably best known for his work on several Blaxploitation soundtracks, including the classic 1974 film, Foxy Brown. From that effort comes “Ain’t That (Mellow Mellow),” a tune that’s been sampled by a wide variety of artists including Drake.

Now it’s your turn. Let us know in the comments below what you expect out of Piscotty for the remainder of this season.

By RotoRob
Tags: Oakland Athletics, Stephen Piscotty
This entry was posted on Wednesday, August 19th, 2020 at 9:18 am and is filed under BASEBALL, MLB Today, RotoRob. You can follow any responses to this entry through the RSS 2.0 feed. Both comments and pings are currently closed.