The Wire Troll: C.J. Abrams Making His Case For 2019 Draft 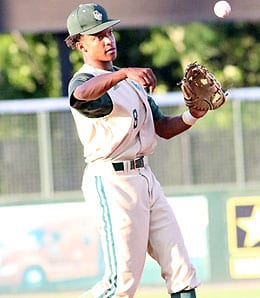 Welcome back to another week of Fantasy baseball waiver wire picks. The 2018 MLB Draft is now complete, so we have a whole new crop of prospects about to enter organized ball. Dynasty League owners: feel free to feast.

This week, Yankees southpaw Jordan Montgomery underwent Tommy John surgery; Tim Lincecum‘s comeback hit a snag when Texas released him; and Drew Pomeranz (biceps) has landed on the DL, allowing Steven Wright to remain in the Boston rotation for the time being (as we predicted last week).

C.J. Abrams, SS, Blessed Trinity Catholic (Georgia) H.S. (ESPN: NA; CBS: NA): An Alabama commit, Abrams is currently projected as a top 10 pick in the 2019 MLB Draft, so dynasty league owners need to start paying attention. This 6’2″, 182-pound 17-year-old was selected to the USA Baseball U18 National Team. Abrams is a superior athlete, having made the all-region basketball team last year. As you can see in the video below, he has a sweet left-handed batting stroke capable of generating power.

We were hooked on the Grateful Dead after the first time we saw them, going to their local shows in Buffalo and Hamilton religiously for several years. Here’s “U.S. Blues,” from their classic live album, Steal Your Face (Volume 2).

By RotoRob
Tags: 2019 MLB Draft, C.J. Abrams
This entry was posted on Saturday, June 9th, 2018 at 4:49 pm and is filed under BASEBALL, RotoRob, The Wire Troll. You can follow any responses to this entry through the RSS 2.0 feed. Both comments and pings are currently closed.