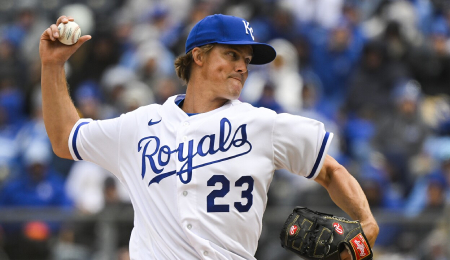 Where does Zack Greinke rank among the greatest ever? (Reed Hoffmann/AP)

We were recently pouring over the all-time leaders in WAR and wondering which active players were moving up the list.

Of the four active leaders in career WAR, three of them were not a surprise. In first place is Albert Pujols (99.1, 32nd all-time, one back of Warren Spahn); in second place is Mike Trout (80.1, 63rd place, just 0.6 back of Tom Glavine); and Justin Verlander was fourth.

None of these came as a shock.

But the man that’s currently third among active players in WAR, sitting 0.8 ahead of Verlander? None other than current Royal SP Zack Greinke.

Somehow, this was difficult to process. But with 74.9 career WAR, there he is, just two back of Hall of Famer Ozzie Smith, with some big names between them such as Lou Whitaker, Johnny Bench and Paul Molitor.

Although he’s no longer a must-own Fantasy asset, he’s still quite useful, and has even recovered some velocity since coming back from a flexor strain. In the two starts since returning, all Greinke has done is win his first two games of the season (the June 24 victory marking his first win in a Royal uniform in 4,285 days — see video below), while allowing seven hits and two earned runs over 12 innings, with a 7-1 K-BB ratio. Not too shabby!

He got off to a great start this year, but it was clear something was wrong based on an ugly showing in May. However, Greinke appears to be back on track now, so could very well be a quite useful Fantasy asset for the remainder of the season and continue to move up that all-time WAR list.

He’s throwing his slider and cutter more often that ever (something he also alludes to in the video above), and that seems to be a good recipe to hold off Father Time (he’ll be 39 in late October).

A long-time personal fave, when Jeff Buckley opened his mouth, the sound of angels came pouring out. The American singer was active from 1990 until his untimely death from drowning in 1997. His one and only studio album (1994), Grace, is a true classic, and for our money, “Lover, You Should’ve Come Over,” is the height of that genius. The song chronicles his breakup with actress Rebecca Moore.

By RotoRob
This entry was posted on Sunday, July 3rd, 2022 at 2:37 pm and is filed under BASEBALL, MLB Today, RotoRob. You can follow any responses to this entry through the RSS 2.0 feed. Both comments and pings are currently closed.