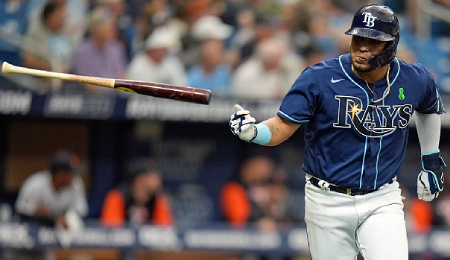 Welcome back to another week of Fantasy baseball. July is here, and soon, the All-Star break… so you better milk the waiver wire while you still have a shot.

This week, Aaron Judge‘s historic season added another accolade as he led all players in All-Star voting; the Freddie Freeman free agency fiasco took another turn; and Kyle Tucker‘s sneakiness backfired as he was thrown out trying to steal home.

Isaac Paredes, 2B, Tampa Bay Rays (ESPN: 29.6 per cent; CBS: 50 per cent): Paredes is simply red hot over the last week or so, proving extremely productive by hammering six dingers over seven games heading into action Friday. He’s been as hot as almost anyone (1074 OPS) over the course of June, but it’s been the shocking uptick in his extra-base power that has really stood out so far this season. Now, if Paredes would just get back to hitting line drives at the rate he did previously in his career, we could see even more impressive results. For a middle infielder, he has surprisingly inept speed, but he’s got a great arm with a solid hit tool and pop. Update: as we were editing this article, Paredes hit another jack (see video below).

Will Smith, RP, Atlanta Braves (ESPN: 26.1 per cent; CBS: 32 per cent): Smith, along with A.J. Minter, is bagging saves in Atlanta while Kenley Jansen (irregular heartbeat) is out. While Minter is having the better season, Smith has a much longer track record as a closer, and he bounced back nicely in June after a somewhat rough May. While Smith is still seeking his first win of the season (he’s never had a winless campaign in his career), he has managed this year to consolidate his ERA improvements from 2021. We think these gains are real based on him trimming both his flyball and line drive rates.

Gio Urshela, 3B/SS, Minnesota Twins (ESPN: 23.3 per cent; CBS: 35 per cent): Urshela dealt with some injury issues last year, but even in being more or less fully healthy this year, he is still regressing offensively. Having said that, we love how he’s improved his contact rate this season, and looking beyond his sliding slash line, the counting cat numbers he’s piled up this year deserve your attention. If Urshela can just reverse that downward line drive rate trend, we’d get really excited.

Nico Hoerner, 2B/SS, Chicago Cubs (ESPN: 17.8 per cent; CBS: 37 per cent): Hoerner, who was among our Top 40 Prospects before graduating from our list last year, has really built on what he accomplished last year. On Friday, he got on base for the ninth straight game, and has gotten better and better as the season has progressed. We’re not sure what happened to Hoerner’s walk rate this year, but it’s not adversely affecting his performance. More and more each year, pitchers are throwing fewer fastballs at him given how well he’s hit them — especially last year. This season, however, Hoerner is feasting on sliders more than any other offering.

Canadian songwriter Corneille was born March 24, 1977, and has been active as a musician since 1993. Here’s the title track off his debut album Parce qu’on vient de loin.

By RotoRob
This entry was posted on Saturday, July 2nd, 2022 at 3:15 pm and is filed under BASEBALL, RotoRob, The Wire Troll. You can follow any responses to this entry through the RSS 2.0 feed. Both comments and pings are currently closed.