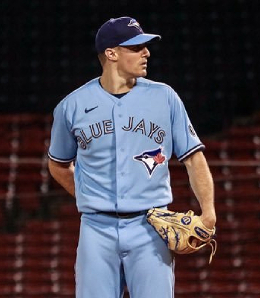 Ross Stripling has filled a gap for the Jays. (Twitter)

Welcome back to another week of Fantasy baseball. We’re into the second half of June now, so it’s really time to focus on improving your team. Use the waiver wire to your advantage!

This week, Thursday’s game in New York had bad pitching juju with both teams’ starters (Tylor Megill and Aaron Ashby) leaving early with potentially serious injuries; Yadier Molina (knee) has hit the IL for the Cards; and Jesse Winker and Seattle avoided a salary battle by agreeing to a two-year deal reportedly worth $14.5 million.

Ross Stripling, SP/RP, Toronto Blue Jays (ESPN: 15.5 per cent; CBS: 36 per cent): Early in the 2020 season, Stripling really impressed us, but things unravelled for him, and went even further south after a mid-season deal to Toronto. Last year, he managed to bounce back somewhat and win a few games, but this season, he’s been superb. Since Hyun Jin Ryu landed on the IL, Stripling has shifted back into the rotation full-time and excelled, tossing 11 shutout frames with just two hits allowed over a pair of starts (see video below for some highlight of the second outing) before having a bit of a rough go against the Yanks on Friday. Before this outing, Stripling’s control had been superb, as he had yet to walk a batter through 13 2/3 IP this month. As always, he’s employing that nice sinking fastball to rack up even more groundballs than usual. Stripling needs to be picked up in all formats, pronto!

Seranthony Dominguez, RP, Philadelphia Phillies (ESPN: 6.1 per cent; CBS: 29 per cent): Corey Knebel has really struggling lately, so for the time being Dominguez was supposed to be the first man up in closer by committee approach in Philly (although that didn’t go down as expected on Friday as Brad Hand bagged the save). Maybe Dominguez is better suited as a setup man, but he’s probably been the team’s best reliever this season; in fact, Tuesday marked the first time he gave up a run since May 3. After barely pitching last year in the wake of Tommy John surgery, he’s been healthy this season, finally looking like he’s back to his rookie form, or even better.

Bo Naylor, C, Cleveland Guardians (ESPN: unowned; CBS: NA): Finding a good dynasty league catcher is always a challenge, so we’d like to suggest Naylor, who is red hot in Double-A. His OPS this month is 1092 as his hitting has dramatically improved in his second season at this level. Best of all? The dude has speed (21 swipes since the start of 2021), a real rarity for a catcher.

Ezequiel Duran, 2B/3B, Texas Rangers (ESPN: 6.7 per cent; CBS: 28 per cent): Yet another of the prospects Texas received in the Joey Gallo trade last year, Duran was recalled early this month and all he’s done since is hit (.308 BA). Many pegged Duran as a top 100 prospect, but we weren’t quite as bullish on him; now, we’re wondering why. You’ve got to love the multiple-position eligibility, too.

Brendan Donovan, 2B/3B/OF, St. Louis Cardinals (ESPN: 25.4 per cent; CBS: 43 per cent): With all the injuries St. Louis has faced, Donovan has managed to come out of nowhere to make himself indispensable. He’s currently riding a six-game hit streak that includes a two-hit game, two three-hit showings and a four-hit performance, taking his June BA to nearly .400. Donovan is enjoying a very productive rookie season, so needs to be picked up in all formats.

Sean Bouchard, 1B, Colorado Rockies (ESPN: NA; CBS: unowned): With Garrett Hampson landing on Covid list, Bouchard has been recalled for his first taste of the Show. Now we’re not expecting him to get much PT, but given what Bouchard has done at Triple-A (11 homers, nine steals, .430 OBP through 139 at-bats), he deserves to at least be on your radar.

David Peterson, SP, New York Mets (ESPN: 8.2 per cent; CBS: 27 per cent): Just over a year ago we recommended Peterson, and it didn’t work out at all. Well, it may be time to give him another look as his job security just increased with Megill (shoulder) out for four weeks. Peterson got off to a good start, however has been shaky lately, so this may be a bit of a risky play, but his record and ERA are still good. He still doesn’t go very deep into his outings and his K rate had dropped this year, but he pitches for a great team, so that’s something. (We’re really selling Peterson, huh?)

Vidal Brujan, OF/2B, Tampa Bay Rays (ESPN: 1.2 per cent; CBS: 16 per cent): We’re not going to argue that Brujan — No. 32 in our Top 100 Prospects rankings this spring — hasn’t been a disappointment so far. But he’s been shifted into the leadoff spot the last two games as the Rays look to get him going. Perhaps a two-hit showing on Friday is the start of something good. Brujan has elite speed and a hit tool with upside.

Jake Burger, 3B, Chicago White Sox (ESPN: 13.7 per cent; CBS: 43 per cent): Burger has seemingly come out of nowhere to provide a nice boost to the Pale Hose this year. Despite a 1-for-11 stretch over the last three games, he’s hitting .326 this month and has managed to make better contact this year (although there’s still room for improvement). He’s excelled in the No. 5 and No. 6 slots in the ChiSox batting lineup, so you want to take a bite out of this Burger, so to speak.

Canadian composer Galt MacDermot had a legendary career working on the soundtracks of some classic films like Hair, plus some blaxploitation greats such as Cotton Comes to Harlem (1970). Here’s the title track from this epic, with George Tipton on vocals.

By RotoRob
This entry was posted on Saturday, June 18th, 2022 at 1:52 pm and is filed under BASEBALL, RotoRob, The Wire Troll. You can follow any responses to this entry through the RSS 2.0 feed. Both comments and pings are currently closed.