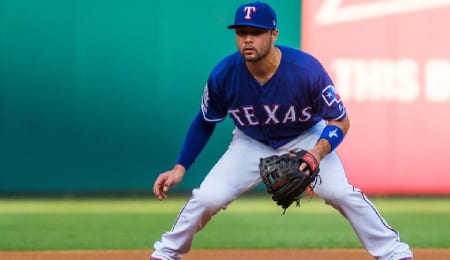 Welcome back to another week of Fantasy baseball. Well, the Marlins’ fiasco aside (and now the Cardinals), it’s been fairly smooth sailing for baseball so far. Continue to work the wire for early-season help.

This week, Mike Trout left the Angels to be with his expecting wife; MLB has instituted new rules around electronic sign stealing; and given the number of double-headers coming soon, MLB has opted to reduce them to seven-inning affairs, which will have an impact on Fantasy owners.

Isiah Kiner-Falefa, C/3B, Texa Rangers (ESPN: 11.8 per cent; CBS: 32 per cent): In late-August 2018, we recommended Kiner-Falefa, especially as a DFS play against southpaws. It wasn’t our best call as he didn’t see as much PT in September, a trend that continued last year. Early on this season, however, Kiner-Falefa again looks like a decent pickup, especially given his catcher qualification. He’s already showing more extra-base sock and has beefed up his BA to the point it won’t hurt you. But it’s the speed potential at catcher that is really enticing (on Wednesday, he had a hit, a walk, two runs and a pair of thefts). Clearly, the hamstring issue Kiner-Falefa had earlier in the week is a non-issue. This is a dude that deserves some Fantasy attention; he flew under the radar as a prospect mostly because he looked like a utility man in the making, but his batting eye, multi-positional eligibility and speed are very intriguing.

Pianist Ludwig van Beethoven died in 1827, but not before changing the world of music. From the 1992 release, The Best of Beethoven comes “Romance No. 2 in F Major,” originally written in 1798, but not published until 1805.

By RotoRob
Tags: Isiah Kiner-Falefa
This entry was posted on Saturday, August 1st, 2020 at 1:06 pm and is filed under BASEBALL, RotoRob, The Wire Troll. You can follow any responses to this entry through the RSS 2.0 feed. Both comments and pings are currently closed.