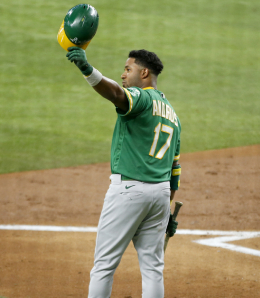 The cheers are few and far between for Elvis Andrus these days. (Tim Heitman-USA Today Sports)

The other day we were perusing the career numbers of three-time All-Star and two time Silver Slugger shortstop Garry Templeton. And when we got to his similarity scores as per Baseball-Reference, who should be at the top of the list?

None other than current Oakland A’s shortstop Elvis Andrus.

The 33-year-old has kind of been in decline since injuries first cropped up in 2018. The following season he bounced back somewhat thanks to being healthier (although did require an IL stint in May), but oh my, did the wheels ever come off in 2020.

Following that season, Texas went into rebuild mode and traded long-time fan fave Andrus to AL West rival Oakland, where he recovered from a counting cat standpoint last year. This year, that bounce back has continued as he’s again been healthy and, although he’s not hitting quite as well, his walk rate and extra-base pop have been much better. On D, Andrus is still capable of stopping runners from advancing, by whatever means necessary (see video below).

Still, is Oakland — in full on rebuild mode — doing the organization a service by trotting him out there every day? At this point, Andrus is really only rosterable in deeper AL-only leagues, and with prospect Nick Allen shaking off a May slump and batting .429 at Triple-A this month, is it time for a change of guard?

Andrus simply is no longer very productive, and steals too few bases to be a difference maker in that regard. Assume that the clock is ticking here…

American rock band Steely Dan is one of the most underrated acts ever, for our money. In 1972, they released their classic debut album Can’t Buy a Thrill, and the B side from their first ever single (“Reeling in the Years”) was “Only a Fool Would Say That,” a personal fave.

By RotoRob
This entry was posted on Tuesday, June 14th, 2022 at 3:26 pm and is filed under BASEBALL, MLB Today, RotoRob. You can follow any responses to this entry through the RSS 2.0 feed. Both comments and pings are currently closed.