The Wire Troll: Kyle Tucker Killing It in Triple-A 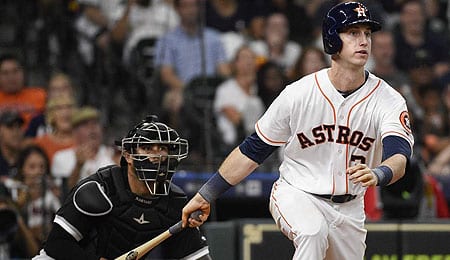 Kyle Tucker is ready for another shot in the bigs. (Associated Press)

Welcome back to another week of Fantasy baseball. We’re just over two weeks away from the 2019 MLB Draft, with a whole new batch of prospects about to enter the game. For now, keep your pedal to the medal and dip into the wire!

This week, Mets OFer Michael Conforto suffered a friendly fire concussion after running into teammate Robinson Cano; Colorado plans to recall SS Brendan Rodgers, one of the top prospects in the game; and Anibal Sanchez is probably heading to the IL with a hamstring woe, possibly opening the door for Erick Fedde to get another crack at the rotation.

Kyle Tucker, OF, Houston Astros (ESPN: 2.7 per cent; CBS: 37 per cent): While everyone is focused on Yordan Alvarez, Tucker has quietly turned things around after a sluggish start. All Tucker’s done over the last 18 games is smack nine long balls and swipe five bags, reminding us that this is one top prospect we best not slip off the radar. He absolutely tore it up in Triple-A last year, but then scuffled in the majors, hitting just .141 with a .236 OBP in 64 at-bats. Tucker is proving he’s ready for another shot should Houston need an outfielder, so consider stashing him. Keep in mind that heading into last season, he was the best outfield prospect in the game and he won’t be 23 until next year. Need a reminder of what Tucker can do? See the video below…

Mark Canha, 1B/OF, Oakland Athletics (ESPN: 0.3 per cent; CBS: 2 per cent): After enjoying his best season and putting up some decent counting cats last year, Canha has had a rough start to 2019, including a stint on the IL with a wrist woe. Well, he was activated on Monday and has homered in both games he’s started since. Need some cheap pop? Canha is worth a look.

Dawel Lugo, 2B, Detroit Tigers (ESPN: unowned; CBS: 1 per cent): Lugo was recalled on Thursday and immediately paid dividends by launching a three-run homer in his season debut. He’s going to play third base every day, so will soon qualify at the hot corner. Lugo struggled to put up counting cats in his first taste of the bigs last year, but looks ready to produce now. The 25-year-old deserves some attention based on his projected PT and a .341 BA at Triple-A.

Hunter Pence, OF, Texas Rangers (ESPN: 29.3 per cent; CBS: 44 per cent): So, who saw this coming? Pence has really revitalized his career in Texas after being reduced to a part-time role in San Francisco last season. He cranked a two-run homer on Thursday, and while the strikeouts are becoming a concern, he now has 20 runs and 27 RBI in 28 games. Pence isn’t an everyday player, but his performance should earn him more PT going forward.

Jefry Rodriguez, SP, Cleveland Indians (ESPN: 8.4 per cent; CBS: 37 per cent): Injuries to Corey Kluber, Mike Clevinger and Danny Salazar have opened the door for Rodriguez, and so far, he’s really taken advantage. Rodriguez earned his first win last week and through four starts, he’s delivered a sub-3.00 ERA, throwing quality outings in every one except his first, as he fell just one out shy. He struggled as a rookie with the Nats last year, spent mostly in the rotation, but he’s looking much sharper now despite a weaker K rate. Rodriguez’s Triple-A numbers were nowhere near this good, so regression is likely coming, but for now, he’s worth taking a flier on.

Jason Kipnis, 2B, Cleveland Indians (ESPN: 5.6 per cent; CBS: 9 per cent): Once a feared lefty slugger, Kipnis has been in offensive regression for about four years now. Recently, however, he’s been looking a bit more like his old self. After spanking his first two dingers of the season on Thursday, the aging second baseman now has five mulit-hit games over the last nine and has been really productive, with seven RBI over the last two. This power display was much needed and proves he may still be a useful Fantasy asset in AL-only leagues.

Steve Cishek, RP, Chicago Cubs (ESPN: 9.4 per cent; CBS: 26 per cent): With Pedro Strop out, Cishek has earned the last two saves for the Cubbies. After a rough start, Cishek has hurled nine straight scoreless outings and is once again a major workhorse for Chicago. Remember, this is no stranger to closing, as he saved 73 games between 2013 and 2014, and then another 25 in 2016.

Willie Calhoun, OF, Texas Rangers (ESPN: 6.5 per cent; CBS: 29 per cent): With Elvis Andrus hitting the IL, Calhoun was promoted from Triple-A this week and is hitting like he never wants to go back. Through two games, he’s gone 6-for-12 with four runs, two homers and five RBI. Calhoun was hitting .304 with a .416 OBP at Triple-A and was clearly ready for another, hopefully more prolonged, look in the bigs.

Aledmys Diaz, SS/2B/3B, Houston Astros (ESPN: 7.5 per cent; CBS: 19 per cent): With Jose Altuve out, Diaz has been handling second base for Houston, and getting it done, with a hit Friday and three straight multi-hit games earlier in the week. Diaz is capable of contributing offensively when he gets enough PT, but note he had to leave early Friday with hamstring discomfort, so see how severe that is before plucking him off the wire.

Here’s another track from Azymuth, this one from the 1982 effort Cascades, “Cascades of the Seven Waterfalls,” a track later covered by Soul Bossa Trio. You’ve got to love the keyboard work here by the late Jose Roberto Bertrami.

By RotoRob
Tags: Kyle Tucker
This entry was posted on Saturday, May 18th, 2019 at 3:50 pm and is filed under BASEBALL, RotoRob, The Wire Troll. You can follow any responses to this entry through the RSS 2.0 feed. Both comments and pings are currently closed.