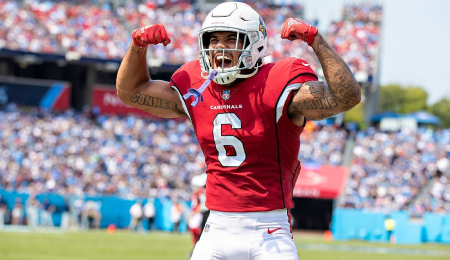 Expecting James Conner to duplicate his 2021 TD total could be a mistake. (ESPN)

Let’s try to determine that today, letting you extract from this backfield the most Fantasy value you can, while also helping handicap the odds.

Okay, so… about those Cardinals’ runners. While once again James Conner enters the season as the No. 1 man, now that Chase Edmonds has taken his talents to South Beach, things have changed in the Arizona running back room. This is where things start to get interesting.

The RB2 job seems to be an open competition, and that’s never a bad thing for a team, even if it’s frustrating as hell for us Fantasy owners. So let’s try to sort out the key candidates.

As mentioned above, Conner remains the top running back in the desert after signing a three-year extension. He’s coming off a season in which he managed to stay healthier than ever before (a back-handed compliment if we’ve ever issued one) and set a career high with 15 rushing touchdowns (with another three receiving — see video below for one of his most impressive scores), but also saw his YPC plummet to its lowest level ever as he failed to average four yards per tote for the first time in his five-year career.

Conner’s first season in Arizona was definitely a mixed bag. While we did anticipate he’d hog the red zone scores, it’s really hard to envision him scoring that many TDs again (he finished in the 96th percentile of red zone TD conversion rate and was third in the NFL in total touchdowns). Even so, Conner remains a top 30 player, and should be among the top 15 RBs off the board in your Fantasy draft.

Do note that he faces a very difficult schedule in 2022, and with the additions Arizona made, it’s not clear he’s in line for any more touches than he got in 2021 (13 to 14 carries per game). The other concern is that the Cardinals’ offensive line won’t be nearly as good this year.

Consider Conner a solid RB2 for Fantasy purposes this season.

A relative unknown in Fantasy circles, Benjamin didn’t see any action in his first year after being a seventh round pick in 2020 and only managed 3.5 YPC in limited action in his NFL debut last year. In fact, it took until the end of the season before he finally earned a double-digit touch game.

Still, Benjamin has impressed the team with his offseason work and could very well have some use as a pass catcher out of the backfield. It will take a lot of health issues for him to wind up with a very valuable role, however. Realistically, Benjamin’s biggest contribution will be in the return game, so his ceiling is probably as a flex option in deep formats.

Arizona’s sixth round pick this year is likely going to have to fight for one of the final roster spots on the team. Ingram has size (6’0″, 215) and nice potential as a pass-catching back.

Consider the USC product a sleeper in PPR formats — especially if injuries strike anyone ahead of him on the depth chart. Ultimately, we like Ingram’s chances more than Benjamin’s.

Ward took a step forward in his second NFL season, but it was a very small step. He was mostly used on special teams, and that’s not exactly what Fantasy owners crave in a running back.

After scoring on his only offensive touch as a rookie, Ward failed to hit paydirt despite averaging nearly a touch per game last year. He was re-signed by Arizona in mid-April, but the 24-year-old offers little upside this season in light of the drafting of Ingram and the signing of Darrel Williams.

Free-agent signee Williams is certainly the most intriguing and accomplished of the Cardinal RB2 candidates. We first saw what he’s capable of in Week Six last year, and he went on to duplicate or surpass that performance a couple of times.

The allure here is that Williams will almost assuredly be the No. 1 man if Conner gets hurt. Williams showed he can be relied on in the potent KC offense, enjoying a breakout that included 40 rushing first downs and a large role in the pass attack. Despite a toe woe, he played in a career high 17 games last year.

Christa Paffgen, better known as Nico, got her start in 1954 and remained active until her untimely death in 1988 as the result of a bicycle accident. A year after her death, a sixth live album was released, Nico Live in Tokyo, from a 1986 recording. From this comes “Purple Lips,” originally released on her 1981 album Drama of Exile.

By RotoRob
This entry was posted on Monday, June 13th, 2022 at 10:51 am and is filed under FOOTBALL, RotoRob, Team report. You can follow any responses to this entry through the RSS 2.0 feed. Both comments and pings are currently closed.