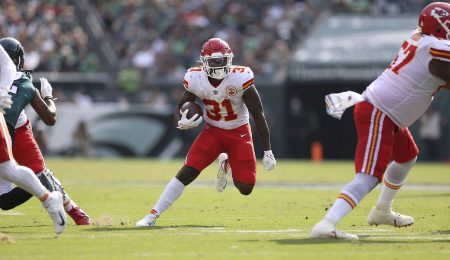 Darrel Williams gets his chance to shine in Week Six. (DraftKings Nation)

This week features AFC North quarterbacks, injury opportunities, the first byes of the season and the ever-prevalent age-model. Week Six presents a golden opportunity for many Fantasy teams to drop some FAAB and get right quick, so let’s begin.

Ben Roethlisberger, Pittsburgh Steelers: Hear us out. It’s no big secret Big Ben’s performance has dropped off a cliff, but he finds himself in a great matchup against Seattle’s ailing secondary. Ranked 27th in passing DVOA, the Legion of Gloom has given four 20+ Fantasy point performances to outside receivers in five weeks, which bodes well for Diontae Johnson. More importantly, Seattle’s pass defense against running backs has been equally anemic, coughing up 33 receptions on 38 targets for 314 yards. In the face of Week Six byes, Roethlisberger will have streaming value, although do note he’s dealing with some minor injuries.

Lamar Jackson, Baltimore Ravens: Jackson annihilated the Colts’ secondary, throwing for multiple touchdowns (four) for the first time this season, while tacking on 62 yards on 14 carries. His anointment, however, will have to wait as the Ravens travel to Los Angeles to take on a run-funneling Chargers defense that has stifled the likes of Patrick Mahomes and Dak Prescott. With Baltimore missing key pieces from the offensive line (Ronnie Stanley, Ju’Wuan James and Ben Cleveland) and with Alejandro Villanueva playing hurt, Jackson will need to outrun and outgun a defense that’s prepared to throw the sink at him. Jackson has definitely outplayed our preseason rankings, but this is one tough matchup for him.

Darrel Williams, Kansas City Chiefs: With Clyde Edwards-Helaire heading for a short IR stint after suffering an MCL sprain, Williams is a must start in Week Six against a Washington defense that’s given up 398 yards and two touchdowns on 108 attempts on the ground, and 176 yards, six touchdowns and 20 receptions on 28 targets in the air to running backs. After CEH was awkwardly carried off by his teammates, Williams was used on 86 per cent of all RB opportunities with Jerick McKinnon handling the rest. Expect Williams to shoulder most of the workload in a get-right game for Mahomes and the Chiefs. As for hitting paydirt, Williams has proved he can find the end zone (see video below), scoring twice between Weeks Two and Four.

Joe Mixon, Cincinnati Bengals: Despite drawing a gorgeous matchup against a Lions’ defense ranked 30th against both the run and pass, Mixon should be sat (and ultimately held out of the game) because of his lingering high ankle sprain. If he does suit up, he will have to compete with Samaje Perine for targets as the latter ran 25 routes compared to the former’s nine in the loss against Green Bay. Mixon is best treated as a touchdown dependent low-end RB2 with little PPR value, which makes him a strong sit candidate.

Mecole Hardman, Kansas City Chiefs: Hardman’s value is trending upwards on the heels of his season-high 12 targets and the news of Tyreek Hill‘s “minor” knee injury. Washington’s defense has been abysmal, allowing the third most Fantasy points to receivers. It’s a defense that’s vulnerable to speed on the perimeter and is likely to bracket both Hill and Travis Kelce, so Hardman has standalone value this week. There is no one on the Washington side of the ball that has the speed to stop Hardman in an aforementioned get-right game for Mahomes.

Amari Cooper, Dallas Cowboys: Fun fact: the Patriots have not allowed a single receiver to record over 100 yards this season and that’s unlikely going to change against the Cowboys. Since the inaugural game of the season, Cooper has failed to clear more than three receptions and 70 yards as the Cowboys have quietly leaned on the two TE sets 34 per cent of the time (second highest in the NFL) while notching a run-pass split of 52 per cent (fifth highest). This is likely to persist until Michael Gallup returns to the fold.

Hunter Henry, New England Patriots: The two TE personnel has provided Mac Jones the ability to stay upright at the cost of $50 million acquisition TE Jonnu Smith emerging as the most expensive blocker in league. The difference in route participation between the duo (32 per cent for Smith vs. 66 per cent for Henry) has opened the door for Henry to increase his target share. Drawing a Cowboy defense that locks up opposing WR1s, but is leaky everywhere else, Henry has top notch streaming value for Kyle Pitts (bye) owners.

Dalton Schultz, Dallas Cowboys: New England has been ridiculously effective at stifling tight ends year-over-year. HC Bill Belichick‘s defense has allowed just 11 receptions for 106 yards on 25 attempts against TEs this season, so expect it to put the clamps on Schultz this week. With La’el Collins expect to return this week, Dallas is more likely to attack the Patriots’ 29th-ranked rushing DVOA. Schultz should see a slightly lower target share and be less efficient.

From the surf band that hates to be a called one, here’s Shadowy Men on a Shadowy Planet with “Harlem By the Sea,” from the band’s 1987 EP Schlagers!

By Lucas Chan
This entry was posted on Wednesday, October 13th, 2021 at 8:58 pm and is filed under FOOTBALL, Lucas Chan, Start 'em Sit 'em. You can follow any responses to this entry through the RSS 2.0 feed. Both comments and pings are currently closed.