The Padres Could Benefit From Expanded Playoffs 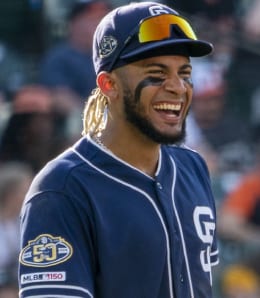 Fernando Tatis Jr. has plenty to be excited about. (Keith Allison)

As MLB owners and the union seemingly work towards an agreement, among the more interesting developments is the proposal to expand the playoffs from 10 to 16 teams.

Given that under any circumstances, nothing resembling a full season is in store for us, allowing more teams into the postseason actually makes a lot of sense. Yes, we used the word “sense” in a sentence about the MLB negotiations.

There are several bubble teams that could really benefit from this plan, and perhaps most enticing among these is the young and exciting San Diego Padres.

Now, for those keeping score at home, the Friars haven’t had a winning season since 2010, so it’s been a decade of misery. Misery and rebuilding. But with a fantastic cadre of young prospects (MLB.com lists only Tampa Bay with a better system), a potential superstar in Fernando Tatis Jr. (our No. 3 prospect heading into 2019) and a new offensive anchor in Manny Machado, the pieces are in place for this team to take a massive leap forward.

No, Machado didn’t hit as well in his first season as a Padre, but that’s not to say he wasn’t productive — with room to grow.

After improving to 70 wins last year, San Diego seems poised to be a .500 team in 2020, and given the difficulty in projecting a shortened season, crazy things could and likely will ensue. It’s easy to imagine this team finishing with a winning percentage of as high as .525 (around 85 wins in a full schedule).

No, the Padres won’t touch the Dodgers, and it may be tough to get over the D-Backs, but the idea they could sneak into a 16-team postseason is far from beyond reason. At the very least, San Diego is not ticketed for another season in the cellar.

Okay, so the team didn’t open its wallet this winter as it had done in the previous two offseasons. Still, with the organic growth expected here, this is a squad on the rise. Deals that brought in Tommy Pham and Trent Grisham should address the Padres’ struggles to get runners on base consistently. Having Tatis fully healthy will help in this regard as well, as he showed amazing on-base skills for a rookie, and he’ll likely bat atop this lineup — while flashing his usually superb defense (see video below).

Pham managed to stay healthy enough to play in a career-high 145 games last year. If he can avoid injury, he’ll be a great asset (especially in OBP leagues), but that’s a big if given his history. The Padres may have had to surrender a fan fave in Hunter Renfroe as part of the deal, but he’s a player that has dealt with his own health issues, making it difficult for him to truly live up to his promise so far.

As mentioned, Grisham knows how to draw a walk, but we’ll need to see this youngster develop a bit more power before jumping on his train as a real Fantasy asset.

Prospects for the outfield grow even more bullish for the future after San Diego used the No. 8 pick in the draft to nab Robert Hassell III, arguably the best high school hitter available this year.

Further, the rotation gets a boost from veteran Zach Davies, who could surprise while keeping a slot warm for one of the many pitching prospects this team has on the way. He bounced back last year to record his third double-digit win campaign in the last four years. A proven winner — coming off a career-best 3.55 ERA — should really help stabilize such a young rotation.

By adding a dependable lefty in Drew Pomeranz, the bullpen could be the best in the entire NL. After acquiring him from the Giants midway through last season, Milwaukee wisely converted him to a reliever, where he really found himself and the K rate spiked.

There’s no doubt pitching will carry this club, but if the team makes a leap offensively, we could be looking at a major surprise here.

New manager Jayce Tingler has his work cut out for him, but surrounded by a couple of new coaches, you can expect this group to bring a breath of fresh air to a stagnant organization.

Let’s hope part of that revitalization will come in the form of Wil Myers finally finding himself. Yet another player the Padres acquired from the Rays, Myers has never been able to build on his 2013 rookie effort. He managed to stay healthy last year, yet lost PT — even though he actually performed better against lefties than he did against righties. This dude is an enigma and sorting him out could go a long way towards making the Padres a contender.

San Diego hasn’t seen the postseason since 2006, so its fanbase must be getting frustrated. It’s really time for this seemingly incessant rebuilding program to bear fruit. General Manager A.J. Preller has now been working on this for nearly six years; you’ve got to think it’ll be his neck on the line if ownership doesn’t seem some tangible results real soon.

Canadian songwriter Neil Percival Young got his start with Buffalo Springfield, but as a solo artist he really made his mark. His 1977 compilation effort Decade featured 35 songs recorded from 1966 to 1976, including the previously unreleased gem “Deep Forbidden Lake.”

Now it’s your turn. Let us know in the comments below how you think the San Diego Padres will do this season (assuming we do have a season, that is).

By RotoRob
This entry was posted on Saturday, June 20th, 2020 at 1:44 pm and is filed under BASEBALL, RotoRob, Team report. You can follow any responses to this entry through the RSS 2.0 feed. You can skip to the end and leave a response. Pinging is currently not allowed.