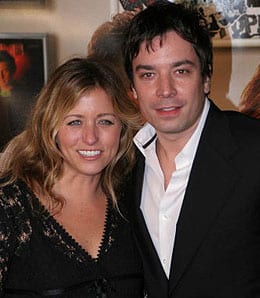 Jimmy Fallon (right) had David Wells on his show earlier this week. No, that’s not a slimmed down, feminine version of Boomer with Fallon.

We’ve got another roundup of various baseball links for your reading pleasure today.

Earlier this week, David Wells appeared on Late Night with Jimmy Fallon to talk baseball and about Boomer’s perfect game. Check out the video here.

We hope you’ve been enjoying the playoffs more than Matt Holliday has. You can find the full schedule for 2009 MLB on TBS Postseason Schedule here.

While Holliday hasn’t been having a good time, his teammate Albert Pujols apparently has plenty of fun in the postseason. Take a peek at the video evidence here.

So far, the postseason has yet to produce anything quite resembling that unbelievably exciting Tigers-Twins playoff game. Then again, duplicating that kind of drama is pretty rare. You can check out a video of the Twins celebrating that dramatic win here.

Cal Ripken gives his take on the Rockies-Phillies series here. And here’s an interview with Yorvit Torrealba, the unlikely hero whose homer was the big blow for the Rox in Game Two.

Speaking of unlikely heroes, how about Mark Loretta of the Dodgers? I love how it’s often a very surprising player who steps up in crunch time. Check out what Loretta had to say.

After a couple of passed balls in Game One, Yankee veteran catcher Jorge Posada is going to be sitting on his duff on the bench for Game Two Friday. Here’s Hot Corner’s take on this. Meanwhile, Chip Caray and Ron Darling talk about how the Yankees creamed the Twins in Game One here. Derek Jeter sure got it done in that game, as he has in countless other playoff contests. Here’s what The Captain had to say about it.

There are just the two games on tap Friday night. At 6 p.m. EST, the Yankees will look to grab a commanding 2-0 series lead over the Twins. But that may be more difficult than it sounds; after all, you have to go back a decade to find the last time New York was able to take a 2-0 lead in a divisional playoff series.

Once that game wraps, we can turn our attention to Game Two of the Red Sox-Angels series, airing at 9:30 p.m. EST. Can the Red Sox rediscover their usual dominance over the Angels, or will the Halos push Boston to the brink?

Finally, over at Braves Journal, as part of its 64 Worst Atlanta Braves bracket, Jeff Francoeur and Rufino Linares square off.

By RotoRob
This entry was posted on Friday, October 9th, 2009 at 4:30 pm and is filed under BASEBALL, Links, RotoRob. You can follow any responses to this entry through the RSS 2.0 feed. You can leave a response, or trackback from your own site.