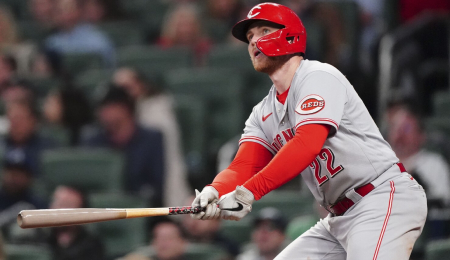 Brandon Drury has taken advantage of his chance in Cincy. (AP Photo/John Bazemore)

Welcome back to another week of Fantasy baseball. It’s now the middle of May, and while there’s a ton of season to be played, enough has occurred for you to have a sense of your teams strengths and weaknesses. Sure, trying to figure out how Tommy Pham has scored 21 runs for the lousy Reds makes you think you’d like to play live blackjack, but take a break and find someone on the wire to address your needs.

This week, Bryce Harper‘s throwing issues were complicated by a UCL tear that will likely keep him at DH for some time; the Guardians failed to protect themselves against COVID; and Christian Yelich tied an MLB mark with his third career cycle.

On Twitter, we were recently asked for some buy-low outfield options. We’ve got a few more in this week’s…

Brandon Drury, 3B/2B, Cincinnati Reds (ESPN: 42.5 per cent; CBS: 42 per cent): It’s been nearly six years since Drury was a top 35 third baseman, and it’s been mostly downhill since, although he did manage to re-establish himself somewhat last year. But what he’s done so far this season has been quite surprising. Given an opportunity to play everyday thanks to a wave of injuries in Cincy (Jose Barrero, Donovan Solano and Max Schrock), Drury is clearly feeling good (as he discussed in the video below) and has really delivered, shaking off a mini slump with a homer, double and four-RBI showing on Friday. The best news for cheap-ass Cincy is that he’s positioning himself as a potential trade chip, so grab him while he’s raking (.595 slugging in May). The former Braves prospect who was sent to Arizona in the Justin Upton trade has always been a decent contact hitter (although the last couple of years that rate has risen somewhat), but offers no speed (it’s been five years since his last MLB steal).

Robbie Grossman, OF, Detroit Tigers (ESPN: 44.1 per cent; CBS: 42 per cent): Grossman made our Wire Troll All-Star Team last year thanks to his walk rate and productivity, however, he’s gotten off to a poor start in 2022 with some low counting cat numbers. And while he remains ice cold now, he had driven in runs in three straight before Friday, making him an intriguing buy-low, streaming or DFS option as he remains as asset in OBP leagues thanks to his superb strike zone judgment (he drew a pair of free passes Friday). Grossman’s BABIP has been ridiculously low lately, and that’s bound to normalize, so taking a flier now could provide nice returns.

Drew Waters, OF, Atlanta Braves (ESPN: 0.3 per cent; CBS: 9 per cent): Our No. 36 ranked prospect in 2021, Waters fell off the Top 100 Prospects list this year after a disappointing season at Triple-A in which he hit just .240 and recorded an OPS of only 710. He still scored plenty of runs, however, and despite some hammy issues to begin this season, he’s proving he’s made the necessary adjustments to master this level. Through his first 39 at-bats, Waters has a 940 OPS, showing dramatically power improvements out of the lead-off spot. If Atlanta’s second round pick in 2017 keeps mashing like this, he’ll put himself in contention to make his MLB debut very soon, so if you have room to stash prospects, this is one to consider.

Jose Siri, OF, Houston Astros (ESPN: 0.6 per cent; CBS: 3 per cent): A few years back, we touted Siri as a prospect to track, but it took him until last season to reach the bigs. And while he impressed in 2021 in the majors, he’s had a tougher time this year despite making better contact. Still, Siri has been getting more burn lately and has responded, going 3-for-8 with a run and ribbie over his last two games before retreating to the bench on Friday. The talent has always been there; if he can tap into that and be a productive hitter, he’ll be a great add in deep NL-only leagues.

Cole Henry, SP, Washington Nationals (ESPN: unowned; CBS: 2 per cent): Given his work in the minors so far, Henry is establishing himself as a legitimate rotation option in Washington for the second half. Through six starts, he’s surrendered a mere five hits over 19 2/3 IP at Double-A, and while the Nats are being super careful with his inning count, he’s slowly being built up, going four innings twice over his last three outings. It’s still unclear how high Henry’s upside is, but man, he looks like he could be a very fine option in the not too distant future.

Here’s another track from the Smoke soundtrack, this time “Shostakovich: Prelude and Fugue for Piano, Op. 87, No. 1 in C Major,” by Russian pianist Tatiana Nikolaeva (1924-1993).

By RotoRob
This entry was posted on Saturday, May 14th, 2022 at 10:38 am and is filed under BASEBALL, RotoRob, The Wire Troll. You can follow any responses to this entry through the RSS 2.0 feed. Both comments and pings are currently closed.