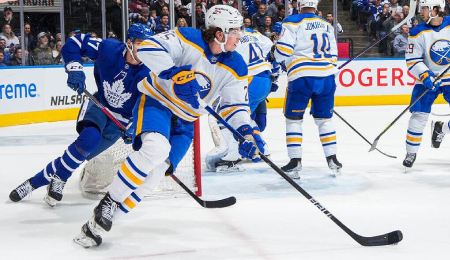 Can Owen Power get the Sabres headed in the right direction? (The Athletic)

Welcome back for another week of Fantasy hockey. This will be our season finale of the NHL Wire Troll, so here’s a last batch of picks to help you wrap up your season in style.

This week, Carey Price returned from a lengthy personal leave to make his first appearance of the season; we lost one of the true all-time greats and perhaps the game’s best pure goal scorer as Mike Bossy passed away; and the Penguins clinched a playoff spot for the 16th straight season — the longest such active streak among all North American professional leagues.

Owen Power, D, Buffalo Sabres (ESPN: 4.7 per cent; CBS: 10 per cent): The first overall pick last year — and perhaps the key cog in the Sabre rebuild — has now played one road and home game in his NHL career. Power was mostly unnoticeable in his debut in Toronto, while we saw both greatness (first NHL point) and room for improvement (getting embarrassed by Vladmir Tarasenko) in his second game. We’re also finding that Power can already log major minutes (23:10 on Thursday), and the huge Mississauga, Ont.-native can clearly skate like a player much smaller than his 6′ 6″, 214-pound frame. We love his future (and based on the video below, it’s clear his teammates already appreciate what he brings to the table), so start enjoying the first taste for your Fantasy team now.

Connor Brown, RW, Ottawa Senators (ESPN: 21.9 per cent; CBS: 36 per cent): When we last recommended Brown in late-January 2020, he was enjoying a career season. He slowed a bit down the stretch before setting a new career high in goals the following season. Brown has been very effective again this season, having already matched his career high in assists, but it’s the ice time increase that has us most excited. He led all Senators with 20:47 on Thursday, marking his third April game of at least 20 minutes. Just keep Brown away from dirty mofo Brad Marchand.

Troy Stecher, D, Los Angeles Kings (ESPN: 0.1 per cent; CBS: unowned): While he did manage an assist on Wednesday, Stecher’s offensive game — such that it was — has regressed in recent years, but his position is likely solidified now that Drew Doughty (wrist surgery) is done for the season. Added as a depth piece by the Kings at the deadline, Stecher now finds himself playing more than he did all season, and he’s capable of helping you in blocks and hits if you’re short on blueliners in very deep formats.

Zach Parise, LW, New York Islanders (ESPN: 2.9 per cent; CBS: 5 per cent): Parise has dealt with injury issues in recent seasons, and while he’s stayed healthy this season, the 10-time 25-goal man is no longer a major offensive force. Having said that, he was recently put on Mathew Barzal‘s line and responded with a PPG and SHG on Tuesday, a goal on Thursday and then another on Friday. Grab Parise while he’s scorching.

Radko Gudas, D, Florida Panthers (ESPN: 18.6 per cent; CBS: 35 per cent): Gudas still plays a highly physical game — both dishing it out and taking it. He leads the league in hits and is averaging nearly two blocks over the last 13 games. Gudas has even managed to find time to pot a pair of goals through six April contests, while racking up a career-best in +/- this season.

Matty Beniers, C, Seattle Kraken (ESPN: 1.4 per cent; CBS: 1 per cent): One of the more intriguing prospects that have signed since the college hockey season ended, Beniers was put on Seattle’s top line right away, and he wasted no time picking up his first NHL point. There’s some great upside here as evidenced by him scoring well over a point per game at Michigan this season. Better yet, the ice time is clearly going to be there for Beniers down the stretch.

Felix Sandstrom, G, Philadelphia Flyers (ESPN: 0.2 per cent; CBS: unowned): Need to stream a goalie in a deeper format? How about rookie Sandstrom, who (with Carter Hart out again) is expected to make his third start of the season in the second half of a home-and-home against Buffalo on Sunday? There’s a chance the woeful Flyers opt to shut down Hart for the rest of the season, so Sandstrom — a prime candidate to take over as the backup goalie in 2022-23 — will get a chance to audition for the job over the final couple of weeks. Sandstrom has racked up 15 wins in the AHL this season, but is still seeking his first NHL victory.

NYC hip hop duo Group Home has been at it since 1990. Originally released on its 1994 12″ single, Supa Star, here’s the instrumental mix of the tune. In the following year, the song showed up on the brilliant soundtrack for Smoke.

By RotoRob
This entry was posted on Saturday, April 16th, 2022 at 1:01 pm and is filed under HOCKEY, RotoRob, The Wire Troll. You can follow any responses to this entry through the RSS 2.0 feed. Both comments and pings are currently closed.