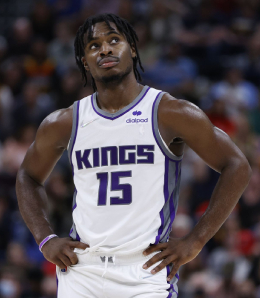 The 2021-22 NBA season is now history, meaning it’s time to review how our Fantasy basketball waiver wire picks did.

With this in mind, we rank players higher that were identified earlier in the season, as — in theory — they had an opportunity to provide value for your team for a longer stretch and have a greater overall impact on your Fantasy season. Curiously, few of our early season pickups hit paydirt; we tended to hit more homers mid and late-season in this particular basketball campaign.

Oh sure, we had plenty of misses among our picks, and because of the bi-weekly nature of our column it means that some hot free agents get scooped up days before we can tout them. But the fact is that if you managed to wind up with, say, two or three of these guys on your team, chances are you enjoyed a pretty successful season.

Davion Mitchell, PG, Sacramento Kings (Week 15): The ninth overall pick in 2021 wasted no time in establishing himself as one of the league’s top defenders thanks to his tremendous energy. And from February on, Mitchell proved he can ball on offense as well, seeing heavy minutes and getting a ton of touches in April after shooting the lights out in March. He missed a bit of time with a hand injury, but wound up being a solid source of points and a player we believe is poised for a major breakout next season — assuming Sacramento doesn’t do that thing it does…

i hope sacramento kings dont f*ck up with davion mitchell like they did with haliburton. knowing sacramento, they'll somehow screw it up

Anfernee Simons, PG/SG, Portland Trail Blazers (Week Three): Our fave early season pick (when he was still coming off the Blazer bench), Simons had a disappointing effort in 2020-21, but he sure took off this season. Portland has to figure out a way to re-sign this breakout star after he got a chance to start more, play more minutes than ever and get way more touches. If Simons can get his three-point touch back to its ’20-21 level, look out. He’s athletic, strong and quick, and while he may not have come into the league fully ready, he’s there now (with a sweet floater — see video below).

Ayo Dosunmu, SG, Chicago Bulls (Week 13): Another stellar rookie, Dosunmu shot very well, had a fine effective FG percentage and wound up contributing three win shares. The Bulls have really leaned on this kid, and watching how he adapts to playoff basketball will be fascinating — especially with Lonzo Ball (knee) out. But after spending most of his time starting, Dosunmu is clearly ready for anything thrown his way.

Devin Vassell, SG/SF, San Antonio Spurs (Week Three): Vassell has quickly developed into a leader on a Spurs’ team that is trying to work its way back into a contender. In his second season, he did a better job avoiding foul trouble while taking a major step forward in virtually every aspect of his game. In the play-in game, Vassell sure showed what made us recommend him twice this season, canning seven treys en route to a team-best 23 points. The major breakout is coming next season for this kid.

Alec Burks, PG, New York Knicks (Week 19): Burks stayed healthy enough to set a new career high in games, really stepping up in March and April. All told, the veteran didn’t sink as many buckets this season, but he was dynamite after we touted him. His reward is being mentioned as part of a rumoured package the Knicks would send to the Pelicans to land Zion Williamson.

Chuma Okeke, PF, Orlando Magic (Week Nine): One of the top Auburn recruits ever, Okeke made some progress in his sophomore season with the Magic. He saw more action, got more starts and improved his rebounding — despite seeing slightly less PT. Okeke justified our selection by finishing strong, enjoying his finest performance in April. He definitely put his name on the Fantasy radar as a very strong streaming option, at the very least.

Cameron Johnson, SF, Phoenix Suns (Week Nine): Johnson missed a fair bit of time with a quad contusion, yet still saw more action than ever, while enjoying the best shooting performance of his young career. He fit in perfectly as a complimentary piece on a superb Suns team and took major strides in his outside game (2.5 threes per game, 42.5 per cent). Johnson really stepped up after the All-Star break, pouring in 15.4 points per game.

Marvin Bagley III, PF, Sacramento Kings/Detroit Pistons (Week 13): Bagley struggled to gain traction this season, so the Kings finally got fed up and shipped him to Detroit, where things turned around dramatically. Upon joining the Pistons, he never shot better and wound up going to the line far more often. It will be interesting to see if Detroit locks Bagley up this summer as he really found himself in Motown… to the extent we remembered why this dude went second overall in 2018.

Canadian rock band Saga has been going strong since 1977. In 1981, they released their fourth album, Worlds Apart, which featured several singles including “Wind Him Up,” which reached No. 64 on the U.S. charts.

By RotoRob
This entry was posted on Sunday, April 17th, 2022 at 6:49 pm and is filed under BASKETBALL, RotoRob, The Wire Troll. You can follow any responses to this entry through the RSS 2.0 feed. Both comments and pings are currently closed.