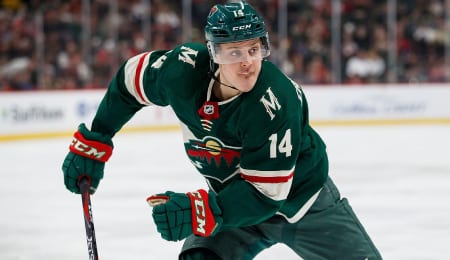 Welcome back to another week of Fantasy hockey. As we near the completion of 2019, take advantage of your partying league mates by pilfering the wire.

This week, Cam Atkinson‘s season has gone from bad to worse as he landed on the IR with a sprained ankle that will cost him 2-to-3 weeks; Canada beat the Americans 6-4 in the opener of the 2020 WJC in an instant classic; and the struggling Blackhawks got more bad news with defensemen Brent Seabrook and Calvin de Haan both done for the season (more on that below).

Joel Eriksson Ek, C, Minnesota Wild (ESPN: 0.8 per cent; CBS: 3 per cent): Blessed with perfect NHL size, Eriksson Ek caught our eye as a rookie, and while it’s been a slow upward trajectory, he really seems to have taken a major leap so far this season, especially in the plus/minus department. Even though he only recently returned from a four-game injury absence, he logged an assist on Friday, giving him points in three of the last four games, and he should get even more responsibility (acting as the No. 2 centre) now that Zach Parise is out 4-to-6 weeks. The fact that Minnesota plays all three games at home next week only makes us more bullish on Eriksson Ek. Just keep him away from Shea Weber‘s lethal slap shots (see video below).

Duncan Keith, D, Chicago Blackhawks (ESPN: 17.6 per cent; CBS: 32 per cent): Already projected to be a top 80 defenseman for the rest of the season, Keith gets a huge boost with both Seabrook and de Haan suffering season-ending injuries and Adam Boqvist now out day-to-day. Keith will get all the PT he can handle, and so far, he’s taking advantage, logging two helpers and going +2 on Friday with three blocks and two shots. The normally durable blueliner dealt with his own injury earlier this season, and was off to his worst start (career low 48.35 CF percentage), but he now has a chance to return to his form from last season.

Zdeno Chara, D, Boston Bruins (ESPN: 17.5 per cent; CBS: 49 per cent): Speaking of aging blueliners, Chara remains a top 70 Fantasy defenseman, but should get a boost with Torey Krug out. Despite battling through a jaw woe, Chara played over 22.25 minutes on Friday, going +1, and he’s already matched his goal total from all of last season. The Bruins’ captain remains a force despite being under two months shy of his 43rd birthday.

Zach Hyman, LW, Toronto Maple Leafs (ESPN: 12.8 per cent; CBS: 34 per cent): Hyman popped a PPG on Friday, giving him seven points in last three games. He’s gotten better each season and despite another injury in 2019-20, he’s on pace for a career-best in goals. The Leafs are red hot, and Hyman’s play has been a big part of that.

Hampus Lindholm, D, Anaheim Ducks (ESPN: 16.7 per cent; CBS: 41 per cent): Have you noticed that Lindhom leads the Ducks with 16 assists, putting him on pace for a career-best 39? He’s struggled to stay in the lineup every game in recent seasons, and his +/- still sucks, but a defenseman that is on pace to flirt with 40 assists and is flying under the radar is intriguing in both season long and DFS play.

Trevor Zegras, C, Anaheim Ducks (ESPN: 0.2 per cent; CBS: 5 per cent): Seeking a dynasty option to stash? Zegras, the ninth overall pick in this year’s draft, is justifying the Ducks’ faith in him, logging four assists in Team USA’s win over Germany in the WJC on Friday. As a freshman for Boston University, he’s averaging over a point per game, looking ready to turn pro next season. And with five helpers through two games in the WJC, he ranks second among all players in tournament scoring. Zegras has the skill and confidence to become a serious offensive contributor in the NHL.

Jaroslav Halak, G, Boston Bruins (ESPN: 25.5 per cent; CBS: 45 per cent): Just over two years ago, we were touting Halak as the man between the pipes for the Isles, but really, since coming to Boston last season, he’s been even better as a tandem goalie. Although he’s been a tad inconsistent lately, he sure looked brilliant on Friday in a 26-save shutout, his third goose egg of the season (which ties him for the league lead) and the 50th of his fine career.

Chris Driedger, G, Florida Panthers (ESPN: 3.2 per cent; CBS: 8 per cent): Driedger has looked superb in two of three games so far, and will get another look Saturday against a weak Red Wings team. DFS alert here!

Noel Acciari, C, Florida Panthers (ESPN: 7.7 per cent; CBS: 21 per cent): Acciari was shut out Monday after scoring in three straight games, including back-to-back hat tricks. He showed promise as a goal scorer two seasons ago in Boston, but is really taking off in that regard now.

Erik Haula, C, Carolina Hurricanes (ESPN: 24.3 per cent; CBS: 38 per cent): Haula had been quiet, but went off for two goals and an assist against Toronto on Monday, and then saw a big boost in PT on Friday. He’s a fine DFS option.

Roxy Music, led by Bryan Ferry, spent 1975 touring to support Siren, its fifth album. The first single from this album was “Love is the Drug,” and here is the original live promo video, taken from that same tour.

By RotoRob
This entry was posted on Saturday, December 28th, 2019 at 5:04 pm and is filed under HOCKEY, RotoRob, The Wire Troll. You can follow any responses to this entry through the RSS 2.0 feed. You can skip to the end and leave a response. Pinging is currently not allowed.