The Wire Troll: Obi Toppin Taking Advantage of his Chance 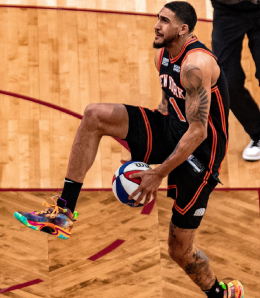 Obi Toppin has stepped up for the Knicks. (Erik Drost)

Welcome back to another week of Fantasy basketball. We’re down to the final few weeks of the season, so this is pretty much your last chance to make a move. Mine that waiver wire!

This week, James Harden pimped Joel Embiid for MVP; unvaccinated athletes can now play in New York City; and DeMar DeRozan (groin) sat on Thursday, but the Bulls were apparently being cautious here, so there’s probably no need to panic.

Obi Toppin, PF, New York Knicks (ESPN: 1.8 per cent; CBS: 13 per cent): With Julius Randle (quad) out, Toppin has put himself on the Fantasy map, going off for a double-double with six assists, a block, a steal and a team-best +18 in 40 minutes on Wednesday before flirting with another double-double on Friday. As long as Randle is out dunk-meister Toppin gets a chance to start. Toppin is starting to show something from outside this month, and overall is shooting better in his second season. Oh, and then there’s his ability to do this…

Dwight Howard, C, Los Angeles Lakers (ESPN: 5.1 per cent; CBS: 5 per cent): Howard had to fight for minutes last season, and he’s seeing even less PT this season, but look what happens when he gets some. With LeBron James (knee) out on Wednesday, Howard stepped up, scoring 24 points (his most in a game since 2018) with eight boards, a steal, a block and a dime — in 28 minutes. Yes, Howard’s PT is very inconsistent, but this game proved that he can still be useful when given the chance. His work on the defensive glass hasn’t been good lately and his bucket count is down this season, but if you had him active this week, you got your money’s worth with a vintage performance. Remember what kind of post moves Howard had when he came out of high school? Every now and then, he reminds us.

Danilo Gallinari, PF/SF, Atlanta Hawks (ESPN: 5.6 per cent; CBS: 39 per cent): It’s been a few years since Gallinari was filling the bucket for the Clippers and his game has regressed since. However, with John Collins (foot/finger) still out, Gallinari is proving he can still ball, scoring at least 10 points in four straight, including a double-double on Tuesday and 25 points on Friday. Gallinari has shot the ball better this month, and — rare for him — he’s stayed a bit healthier this season. Of course, as we say that, he was dealing with an Achilles’ injury that cost him Wednesday’s game and a biceps injury that had him as questionable on Friday (despite his scoring display). So, yes, there are safer options.

Tyus Jones, PG, Memphis Grizzlies (ESPN: 8.3 per cent; CBS: 19 per cent): We last touted Jones over two years ago when he had a chance to establish himself thanks to injuries. He wound up playing decently, but never got enough PT to really shine. Now, with Ja Morant (knee) out at least two more weeks, Jones is getting a shot again and rising to the occasion with three straight games of 11 or more points, including a double-double on Wednesday. Jones has proved he can produce when he starts, and now that he’s the starting PG for the Grizzlies, he’s sure to be a popular pickup, so move quick on this one.

Drew Eubanks, PF/C, Portland Trail Blazers (ESPN: 14.7 per cent; CBS: 42 per cent): Eubanks has come out of nowhere to put up near top 50 numbers over the last couple of weeks, earning himself a series of 10-day contracts. With eight straight double-digit scoring efforts, a couple of double-doubles (with near double-doubles in almost every other game), he’s put himself on the map as a nice DFS play or full-season pickup (just note he’s not signed for the rest of the season).

Gary Payton II, PG/SG, Golden State Warriors (ESPN: 3.3 per cent; CBS: 5 per cent): We had hope for Payton back in the day, but he’s struggled to crack NBA rotations throughout his career. Having recently returned from a knee woe, he’s been getting solid PT now, and that should continue with news that Andre Iguodalo (back) will remain out. Payton has scored at least 11 in three straight, so could make for a decent deep league option.

Ben McLemore, SG/SF, Portland Trail Blazers (ESPN: 0.7 per cent; CBS: 4 per cent): The last time we recommended McLemore, it turned out pretty well before he faded over the final few weeks. Well, he’s rolling again, pouring in 23 points off the bench on Wednesday before adding 15 on Friday as he’s established himself as the sixth man in Portland. While the buckets are dropping for McLemore, he’s an attractive add.

Rui Hachimura, PF/SF, Washington Wizards (ESPN: 8.5 per cent; CBS: 45 per cent): While Kyle Kuzma (knee) remains out, Hachimura is worth a look. If nothing else, Hachimura did this, which apparently really endured him to his teammates as a momentum-changing event. More reasons to pick him up: 10 straight double-digit scoring games and his increased role as the season has gone along.

Bagad Kemper formed in 1949, making it among the oldest bagad Breton pipe bands. From its 2012 Best Of album, here’s “Laeradeg.”

By RotoRob
This entry was posted on Saturday, March 26th, 2022 at 12:25 pm and is filed under BASKETBALL, RotoRob, The Wire Troll. You can follow any responses to this entry through the RSS 2.0 feed. Both comments and pings are currently closed.