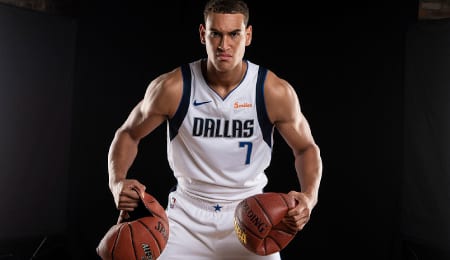 Dwight Powell has the physicality to kill it in the NBA. (HoopsHype)

Welcome back to another week of Fantasy basketball. We’re into December, and now nearly a quarter of the way through the season. Keep your foot on the pedal and milk that wire.

This week, the Knicks have now lost eight straight, their latest loss described as “sickening” by Head Coach David Fizdale; as if there’s not enough controversy in Houston (thanks to the Astros), now the Rockets have officially protested Tuesday’s loss when James Harden‘s dunk was not counted; and Portland has guaranteed Carmelo Anthony‘s contract for the rest of the season.

Dwight Powell, C, Dallas Mavericks (ESPN: 37.6 per cent; CBS: 27 per cent): While Powell came out early last game with an arm injury, he’s says he’s ready to go on Saturday, which is great news as he’s starting to roll for the Mavs. Despite leaving early on Wednesday, he put up 24 points with five boards, four assists, two blocks and a steal, his third double-figure scoring effort over the last five games. Two seasons ago, Powell was a Wire Troll All-Star, as he enjoyed a breakout campaign. Last season, Powell sunk more treys, taking his scoring a step further, but it’s been a different story early on this season. He’s starting most games, but simply hasn’t been sinking as many buckets. Still, Powell has been turning it around this week, making this athletic player a more enticing pick up. At 6’10”, 240, he has the size to succeed (and he certainly has shown an ability to outmuscle opponents for rebounds — see video below), but he simply needs a fire lit under him to deliver a more consistent effort.

Norman Powell, SG/SF, Toronto Raptors (ESPN: 12.5 per cent; CBS: 42 per cent): Powell has really been stepping up offensively lately, scoring at least 14 points in four straight games, and shooting extremely well throughout this stretch. He’s being asked to guard top players, and a season after missing several weeks with a shoulder injury, he’s become a bigger part of the team than ever before, responding by getting to the line far more often. Powell may still have a bit of upside to his game.

Jerami Grant, SF/PF, Denver Nuggets (ESPN: 10.9 per cent; 13 per cent): Denver has been receiving tremendous production from its bench, and a big part of that has been Grant, who shot brilliantly on his way to 16 points on Thursday — his third time scoring 12 or more over the last four games (the only game in that stretch he didn’t was because he was playing through an illness). He’s generally been very durable over the last few seasons, but after breaking out as a starter in OKC last season, he’s adjusting to being used exclusively off the bench for the Nuggets.

Monte Morris, PG, Denver Nuggets (ESPN: 0.4 per cent; CBS: 3 per cent): Speaking of the productive Denver bench, let’s not forget Morris, who also a big game Thursday, potting 15 points with six assists, three boards, three steals and a block. He now has at least 10 points in three of the last five games, but his sporadic PT makes him tough to trust in standard sized leagues, so this is a deep league special. Morris, being used exclusively off the bench so far this season, has seen his PT decline compared to last season, so we’ll need to see him regularly get at least 20 minutes before fully jumping aboard his train. He was a bigger Fantasy factor last season, so we’re hoping to see more games like he had on Thursday.

Garrett Temple, SG/SF, Brooklyn Nets (ESPN: 4.0 per cent; CBS: 25 per cent): With Kyrie Irving out, Temple is getting more burn, and he responded with a season-best 27 points on Thursday, adding four boards and three assists. That’s three games of at least a dozen points over the last four tries for Temple. The veteran has taken a real leadership role in Brooklyn and is sinking more buckets than he ever has, so grab him while he’s getting the PT.

Tyus Jones, PG, Memphis Grizzlies (ESPN: 1.8 per cent; CBS: 27 per cent): Jones has yet to assert himself as a Fantasy factor in his career, but he may have a chance to shine with Dillon Brooks (shoulder) questionable for Saturday. Jones is not getting quite as many touches this season, but his PT is up in the last week, so the former Duke star is worth watching this weekend.

Moritz Wagner, PF/C, Washington Wizards (ESPN: 9.4 per cent; CBS: 47 per cent): Sent by the Lakers to Washington as part of the three-team Anthony Davis deal in the summer, Wagner got a few starts for the Lakers last season, but has mostly been a bench player in Washington so far. Wagner put up a double-double last weekend, and has flirted with a couple more in recent games. The big man has also shown some solid one-on-one defensive chops, which is sure to help him continue to see 20+ minutes going forward.

British library musician Jim Lawless was born in 1935, and doesn’t seem to have had an album released in the last dozen years. In 1976, his song “Madrigal on the Move,” appeared on Pictures in Sound, an Amphonic Music compilation. Apparently, this song was also used by NFL films, hence the video below. The instrumental is also credited to Syd Dale and his Orchestra.

By RotoRob
Tags: Dwight Powell
This entry was posted on Saturday, December 7th, 2019 at 12:11 pm and is filed under BASKETBALL, RotoRob, The Wire Troll. You can follow any responses to this entry through the RSS 2.0 feed. Both comments and pings are currently closed.