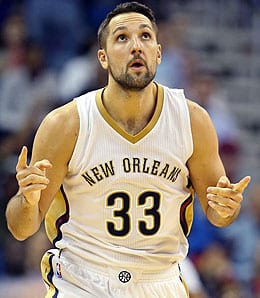 The Houston Rockets slid 15 games in the win column last season, suffering from defensive lapses that cost Coach Kevin McHale his job early in the season. They barely squeaked into the playoffs before being eliminated in five by eventual Western Conference Champion Golden State.

After an offseason of change, it’s unclear this team is any better.

Let’s explore some of the key changes since we last checked in on this squad.

It was certainly a summer of change, but the phrase “rearranging deck chairs on the Titanic” keeps running through our head. The fact that Dwight Howard is now gone can’t exactly help a Houston club that ranked 25th in points allowed last season.

Howard bounced back somewhat last season, but is miles from the force he was before he left the Magic. Still, we’re talking about a high-percentage shooter (see video below for one of his top Rocket highlights) capable of racking up the boards and blocks — not easy to replace.

Superman’s departure leaves the starting centre gig to youngster Clint Capela. This Swiss prodigy has the raw skills to suggest he can be a serious defensive force, but it takes time for young bigs to mature. Capela spent nearly half of last season starting for the Rockets, so at least he’s not being completely thrown into the fire, but expecting him to duplicate Howard’s numbers is unwise.

The big additions this summer (after failing to land the likes of Kevin Durant and Al Horford) were PF Ryan Anderson and SG Eric Gordon. Houston spent a ton of cash on a player that’s very one dimensional in Anderson and very fragile in Gordon.

It’s hard to envision the Rockets being a better defensive team next season.

On the other end of the court, however, Houston should run wild if its new players can stay healthy — exactly what you envision with a Mike D’Antoni-coached club. Having a better perimeter game to go along with James Harden’s overall game should make this team very tough to defend.

Speaking of Harden, he takes a lot of flak for his defensive indifference, even if Durant recently came to his defense: “Nobody really appreciates what he does except for the players in our league,” KD told the Houston Chronicle.

SF Michael Beasley’s contract was recently guaranteed, and he seems like the ideal D’Antoni player — instant offense, laughable defensive skills. It’s clear Beasley will never live up to being the No. 2 pick in 2008, but after having to go to China to find work, his performance after his return to the NBA last season was impressive — and efficient. He longer hoists many shots up from beyond the arc, but is a better rebounder who will chip in with the occasional block. Still, it’s all about the scoring with Beasley, and if he’s given more PT this season (which is likely), he can be a very sneaky Fantasy asset. After he put up a whopping 31.9 PPG in 36.5 MPG in China, watch for him to be the key to the team’s second unit.

The Rockets also added veteran PG Pablo Prigioni, for some reason signing a 39-year-old backup to a two-year deal. Of course, this is the same team that ran fellow senior Jason Terry out there the past two seasons.

Prigioni barely gets any touches, and his outside game really deteriorated last season, but he’s a strong FT shooter at least.

If bloodlines mean anything, perhaps the addition of undrafted guard Gary Payton II will pay off. He proved he can score at Oregon State, although failed to show that skill in Summer League play. The upside here is Payton makes the team and steals the job backing up PG Patrick Beverley from Prigioni.

Two other undrafted players Houston added on a non-guaranteed basis are: Isaiah Taylor from Texas and Kyle Wiltjer from Gonzaga, the latter of which could fit in well as a big that can stretch the floor.

Perhaps Houston’s best move this summer? Using the cap space created by Howard’s departure to give franchise player Harden a four-year, $118 million contract extension that will likely keep him in Houston until the end of this decade. Sure, better D would be nice from the Beard, but this is a durable SG which Houston really relied on from outside last season while he set career highs in points, rebounds and assists per game and maintained a strong FT percentage.

Terrence Jones was also allowed to walk and Donatas Motiejunas has yet to re-sign (even though it sounds like both parties want to make that happen), so Nene Hilario has been brought it to bolster the frontcourt. Yes, another injury-prone senior citizen. Nene’s game has slowly been eroding the past couple of seasons, so he’s mostly just a bench player now, no longer a strong rebounder but one capable of blocking a shot every now and then.

Fortunately, Houston didn’t pay much to land him.

Unfortunately, the Rockets did shell out a hell of a lot of cash to raid the Pelicans of Anderson (four years, $80 million) and Gordon (four years, $53 million). Gordon spent five seasons in the Big Easy. His games missed by season: 73, 40, 18, 21 and 37. Um, ya. That’s some serious durability there.

On the plus side, Gordon really went to the outside game more than ever last season, while also scoring more points from the line.

Still, this is a contract Houston may live to rue.

Anderson, meanwhile, will really help improve Houston’s three-point game — a key component of the team’s attack. However, it’s a also a ton of money to commit to another injury prone and defensively weak player.

All told, Houston may wind up being worse before it gets better. It wouldn’t be a shock to see this team miss the playoffs, and the betting sites clearly agree, given the long odds that have placed on this team.

Now it’s your turn. Let us know in the comments below how you think Houston will do next season.

By RotoRob
Tags: Houston Rockets
This entry was posted on Wednesday, August 10th, 2016 at 2:09 pm and is filed under BASKETBALL, RotoRob, Team report. You can follow any responses to this entry through the RSS 2.0 feed. Both comments and pings are currently closed.