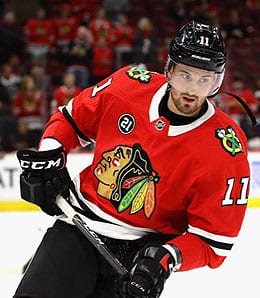 Brendan Perlini is tearing it up down the stretch. (Twitter.com)

Welcome back to another week of Fantasy hockey. We’re into mid-March now, with just a couple of weeks left in the regular season, so this is your final chance to add waiver wire talent to your squad.

This week, the NHL announced it’s moved the draft lottery up this year, to April 9; despite an appeal, Gary Bettman upheld the ridiculous two-game suspension handed to Jakub Voracek for protecting himself; and, an NHL investigation has concluded that Toronto blueliner Morgan Rielly did not use an anti-gay term at referee Brad Meier on Monday.

Brendan Perlini, RW, Chicago Blackhawks (ESPN: 3 per cent; CBS: 8 per cent): After scoring 30 points in his sophomore season for the Coyotes, Perlini has been a bit of a disappointment this season both before and after he was traded to Chicago. However, he’s turned things around recently. Teamed with Alex DeBrincat and Dylan Strome on a very young second line for the Hawks, Perlini has recorded back-to-back three point games (including his first NHL hat trick against the team that traded him — see video below), giving him five goals and two helpers over the last four. Through 35 games since joining the Hawks, he now has 10 goals, and he should reach 15 for the season for the second straight campaign. The Great Britain native has size (6’3″, 211) and speed, and is starting to flash the skill that made him the 12th overall pick in 2014.

Jared McCann, LW, Pittsburgh Penguins (ESPN: 15.9 per cent; CBS: 24 per cent): McCann was shut out Thursday, coming on the heels of back-to-back multi-point games and five points in his previous four. Since arriving in Steel City and getting a chance to play with Sidney Crosby, McCann has been a different player. In 21 games as a Penguin, McCann already has more goals than he scored in 46 games with the Panthers to start the season.

Jakob Silfverberg, RW, Anaheim Ducks (ESPN: 38.9 per cent; CBS: 39 per cent): Anaheim had been playing better lately, much of that thanks to the scorching play of Silfverberg, who is riding a seven-game point streak (4-5-9) including scoring goals in three straight. If he continues at this pace, he could reach 40 points for the third straight season.

Erik Brannstrom, D, Ottawa Senators (ESPN: 0.4 per cent; CBS: 13 per cent): A key component of the Mark Stone deal, Brannstrom was taken 15th overall by Vegas in 2017. Brannstrom made his NHL debut on Thursday, going +1 in 17:20 of ice time. After scoring 29 points in 46 games in the AHL this season, this kid is a big part of the Ottawa rebuild and deserves watching down the stretch.

Garret Sparks, G, Toronto Maple Leafs (ESPN: 1.8 per cent; CBS: 11 per cent): Sparks makes for a fine DFS play on Saturday when he’ll start against lowly Ottawa. Over his last two games, he’s been much better, saving 45 of 48 shots in relief efforts after Frederik Andersen didn’t look so hot (just as he didn’t look so great Friday, either). Sparks was brilliant as the AHL starter last season, earning the backup gig in Toronto this season, and he’s seen a bit more action in the NHL this time around.

Anton Khudobin, G, Dallas Stars (ESPN: 4.9 per cent; CBS: 20 per cent): Khudobin gave up a soft goal early on Friday, but then saved 35 of the final 36 shots as he continued a superb run over the last week. His record is no hell this season, but there’s nothing wrong with his 2.54 GAA and .925 save percentage (plus two shutouts). With Ben Bishop out day-to-day, Khubodin makes for a great short-term add.

Casey DeSmith, G, Pittsburgh Penguins (ESPN: 9.5 per cent; CBS: 33 per cent): DeSmith made 26 saves on Thursday — 21 at even strength — to earn his third shutout of the season. He’s now won 15 games with a solid .916 save percentage, seeing way more in action in his second season in the league. DeSmith’s play, along with Matt Murray, has the Penguins poised for another Cup run; in fact, you could argue that DeSmith’s run in December really turned Pittsburgh’s season around. And after a couple of down months, it looks like DeSmith is going to finish strong.

American pop singer Linda Ronstadt racked up a ton of awards in a career that spanned 44 years before she retired in 2011 because of illness. In 1975, she released her sixth solo album, Prisoner in Disguise. The second single from this effort was “Heat Wave,” a cover of the 1963 Martha and the Vandellas‘ hit.

By RotoRob
This entry was posted on Saturday, March 16th, 2019 at 2:53 pm and is filed under HOCKEY, RotoRob, The Wire Troll. You can follow any responses to this entry through the RSS 2.0 feed. You can skip to the end and leave a response. Pinging is currently not allowed.