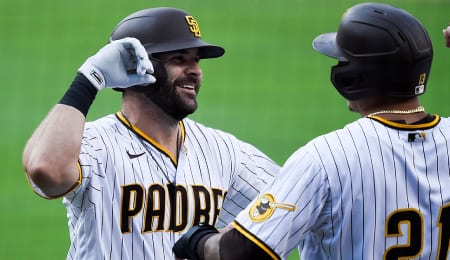 Mitch Moreland (left) had little to celebrate personally as a Padre. (Fox Sports)

For the first time since 2006, the San Diego Padres are back in the playoffs. Now it’s time to see if they can accomplish what’s never been done in franchise history — win the World Series.

Twice in its existence, San Diego has reached the Fall Classic, in 1984 and in 1998. And while each of those teams were excellent, they were unable to sustain that level for long. By 1987, the Padres had regressed to a 65-win team; and in 1999, they plummeted to 74 wins after earning a franchise record 98 victories the season before.

Given the makeup, youth and farm system San Diego currently possesses, it’s hard to imagine this team isn’t set up for long-term success.

As a team, a lot of things have gone very well for the Friars this year. They rank second in the majors in run differential; third in isolated power; and fifth in opponents’ isolated power. Let’s examine some individual things that went well, and some that didn’t go quite as expected.

Finally, outfielder Wil Myers was able to not only duplicate, but surpass the performance from his rookie season back in 2013. For the second straight year he stayed healthy, but this season — after his offensive game regressed in 2019 — his power reached new levels in an extremely productive campaign. In late-June, we wrote that Myers needed to really find himself this season; well, we were bang on as he wound up in the top 20 in homers, RBI and OPS to cap a career year. He looks like a top 30 outfielder entering 2021.

We weren’t expecting much out of Mitch Moreland heading into this season, however early on for Boston, Moreland never looked better — especially from an on-base perspective. However, his extra-base pop fell off the table in San Diego and he barely topped the Mendoza Line, so of all the moves San Diego made at the deadline, trading for Moreland didn’t exactly pay dividends (despite Eric Hosmer breaking a finger earlier this month). Hey, if nothing else, Boston talked the talk about how tough it was to deal Moreland (see video below). Still, as a veteran of nearly 50 playoff games and the owner of a World Series ring, he should be a steadying force for this young club in the postseason.

Former Yankee farmhand Jorge Mateo was once a top 30 prospect before falling off the map after landing in the Oakland system in 2017. He revitalized his career enough to jump back to No. 60 on our Top Prospect Rankings heading into 2020 before getting dealt to San Diego in late-June for a PTBNL. Mateo finally made his long-awaited MLB debut this year, and to say it was worth the wait would be, well… inaccurate. He really struggled to get on base while displaying very little extra-base sock. In fairness, it was a very small sample size, but barring a major turnaround as a late bloomer, Mateo no longer seems destined for stardom. His speed and defensive flexibility make him a nice utility option, but unless he lands a full-time gig, it’s going to be tough for him to deliver much Fantasy value.

American singer Carly Simon got her start in 1964, and she’s still at it today. In 1987, she released her 13th studio album, Coming Around Again, which included a cover of Herman Hupfeld‘s “As Time Goes By” — a song most famous from its inclusion in Casablanca.

Now it’s your turn. Let us know in the comments below what you thought the most pleasant surprises and most disappointing developments were for the Padres this season.

By RotoRob
This entry was posted on Monday, September 28th, 2020 at 3:21 pm and is filed under BASEBALL, Good Bad and Ugly, RotoRob. You can follow any responses to this entry through the RSS 2.0 feed. Both comments and pings are currently closed.