The Wire Troll: Nic Claxton Breaking Out in Brooklyn 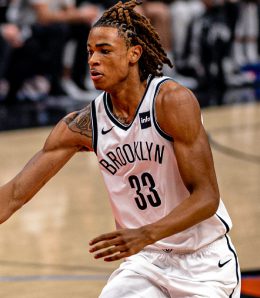 Happy New Years to all our readers, and welcome back to another week of Fantasy basketball. Things are really tough for owners now, with players entering the COVID protocols right, left and centre. Everyone is facing the same challenges, so keep your eye on the news and the waiver wire.

Nic Claxton, C/PF, Brooklyn Nets (ESPN: 10.2 per cent; CBS: 27 per cent): Claxton had only received one career start over his first two seasons, so small wonder he’s never really popped up on the Fantasy radar. This season, however, he’s getting tons of starts with the Nets dealing with COVID issues (like everyone else), and he’s really taking advantage — and perhaps it’s something we should have all seen coming. With another 10 points on Thursday, Claxton has now scored in double-digits four times over the last five games, and he’s been flirting with double-doubles while contributing with plenty of blocks. In seeing way more action this month, he’s been getting more touches, and overall, his shooting percentage keeps rising each season. Claxton, who had a statement dunk over LeBron James on Christmas Day (see video below), has the size to be an effective NBA big, but there were questions about his strength coming out of college. We think Claxton has answered that with authority and suggest you pick him up while he’s rolling.

Cat Stevens was elected to the Rock and Roll Hall of Fame in 2014. In 1970, he released his fourth — and probably best — album, Tea for the Tillerman, and the second single from this classic was “Wild World.”

By RotoRob
This entry was posted on Saturday, January 1st, 2022 at 12:33 pm and is filed under BASKETBALL, RotoRob, The Wire Troll. You can follow any responses to this entry through the RSS 2.0 feed. Both comments and pings are currently closed.