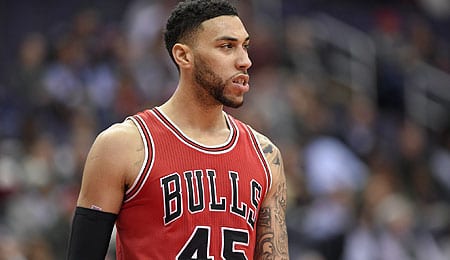 Welcome back to another week of Fantasy basketball. Christmas is almost here, and it’s time for you to decide if your teams have been naughty or nice. Either way, the wire is your best friend, so use it!

This week, Carmelo Anthony is being praised for accepting his lesser role with the Thunder; Sacramento will be without rookie De’Aaron Fox (quad) for at least two weeks; and Mike James, who was highlighted in this space just two weeks ago, has been cut by Phoenix (oops).

Denzel Valentine, SF, Chicago Bulls (ESPN: 9.2 per cent; CBS: 44 per cent): Need help with three-pointers? Valentine is absolutely on fire from beyond the arc currently, nailing 7-of-11 over the last two games. He put up 18 points on Thursday (see video below), flashing an array of moves and a very quick release. Valentine’s FT shooting has been better lately, and he’s being rewarded with more PT in the last couple of games after spending most of the month losing minutes. After exclusively coming off the bench as a rookie, he’s been used as a starter this season. Taken 14th overall by the Bulls in 2016, Valentine had a historic senior season at Michigan State, averaging over 19 points, seven boards and seven assists — totals not duplicated by any college player in at least 30 years. It’s important to note that David Nwaba is competing for PT and Zach LaVine (knee surgery) is expected to make his Bulls’ debut around mid-January, so that could definitely affect Valentine’s minutes and starting role.

Kyle Korver, SG, Cleveland Cavaliers (ESPN: 13 per cent; CBS: 19 per cent): Another source of treys — although perhaps not with Valentine’s upside — is wily old veteran Korver. Korver bounced back from an ugly shooting night Tuesday to can 4-of-6 three pointers on Thursday en route to 15 points, two boards, two assists and a steal in 25 minutes. His touches are a bit down lately, but overall have risen this month. Korver has more or less been just a bench player since coming to Cleveland, but his overall numbers this season are down only a smidge over what he did last season.

Isaiah Canaan, PG, Phoenix Suns (ESPN: 10.6 per cent; CBS: 17 per cent): It certainly seemed as if Canaan had taken over for James as the PG to own in Phoenix, but now that James has been cut, it’s obvious. Canaan has hit double digits in points in all four games since joining the Suns as his PT is way up. Phoenix has signed him for the remainder of the season after he joined the team under the injury hardship exemption. Canaan was providing seventh round value with his play last week, and if that continues, he has a chance to be one of the better waiver wire gems of the season.

Anthony Tolliver, PF, Detroit Pistons (ESPN: 0.6 per cent; CBS: 1 per cent): Tolliver hasn’t been shy about jacking up the long bombs lately, attempting 6.6 treys per game over the last five including a whopping 10 on Friday. His overall shooting has been strong lately (leading to a season-high 18 points on Wednesday), and he’s been seeing enough PT this month to be worthy of some Fantasy love. Tolliver is seeing an increased role in Detroit’s offense, recording his most field goal attempts per game since his single season with the Warriors in 2009-10 when he looked like a budding star. Considering he wasn’t selected in the 2007 draft, this journeyman has put together a pretty decent — and long — NBA career.

Michael Beasley, SF/PF, New York Knicks (ESPN: 27.7 per cent; CBS: 42 per cent): Notwithstanding a quiet game on Friday, Beasley has been beastly for the Knicks of late. On Thursday, he exploded for 32 points, 12 boards and a trey; on Monday, he had 23 points, nine rebounds, two three-pointers and two blocks; and last Saturday, he went off for 30 points with five boards, four assists, two treys and two blocks. Beasley’s touches have been through the roof lately and have continued to rise as the season has progressed. If his FT shooting was at its normal standard, he’d be scoring even more points. This explosion began when he was starting for the injured Kristaps Porzingis. Now that he’s returned the bench, Beasley’s PT will again be all over the map (like Friday). Hopefully the team realizes Beasley needs to be starting, because we’re looking at Fantasy gold here. It’s sweet vindication for a dude that sunk so low he had to go play in China a couple of years ago.

Jordan Bell, PF/C, Golden State Warriors (ESPN: 4.9 per cent; CBS: 24 per cent): Bell has been seeing much more PT lately, but on Friday the rook finally showed what he can do with it, going off for 20 points, 10 boards, three assists, a steal and a block. His touches are way up recently and his buckets have risen dramatically this month as a result. Chicago’s second round pick this year, Bell was flipped to Golden State for cash, and the reigning Pac 12 Defensive Player of the Year has proved to be a steal. As of a couple of weeks ago, he was leading the NBA in field goal accuracy in the paint.

By RotoRob
Tags: Chicago Bulls, Denzel Valentine, fantasy basketball
This entry was posted on Saturday, December 23rd, 2017 at 4:39 pm and is filed under BASKETBALL, RotoRob, The Wire Troll. You can follow any responses to this entry through the RSS 2.0 feed. Both comments and pings are currently closed.