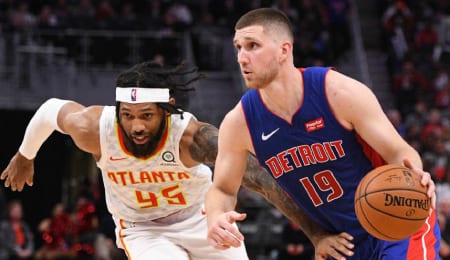 Welcome back to another week of Fantasy basketball. While the season is suspended for at least the next few weeks, we’re still here to help you mine the wire on the assumption we’re going to get a chance to complete the 2019-20 schedule. There’s no reason to spend all your time monitoring the doom of the world, is there?

This week, the Toronto Raptors — the last team to play the Jazz and COVID-19-infected Rudy Gobert — tested negative to the virus; Phoenix has continued its games virtually, and on Friday got pummeled by the Mavs thanks to 50 points and 19 assists by Luke Doncic; and the union has issued a memo to the players regarding doomsday pay provisions.

And now, let’s get to this week’s Fantasy basketball waiver wire recommendations (again, with the caveat that we won’t be seeing any more NBA action until early April, at the earliest)…

Sviatoslav Mykhailiuk, SG, Detroit Pistons (ESPN: 4.3 per cent; CBS: 12 per cent): This Ukrainian hadn’t really been on the Fantasy radar yet, but it’s hard to ignore the amount of three pointers he’s been hoisting of late. On Wednesday, Mykhailiuk canned 3-of-9 from beyond the arc — the third time already in March he’s jacked up at least nine attempts from downtown. He wound up with 16 points, four assists, two boards and two steals in 24 minutes, and while his FT shooting has left something to be desired this month, the rest of his game has picked up. Mykhailiuk has been sinking more buckets for the Pistons this season and the former Laker seems to have really found a home in Motown. Taken 47th overall in the 2018 NBA draft, this dude is a shooter (see video below), but he can struggle when his confidence takes a dent, and that’s not a great quality for a shooter.

Boban Marjanovic, C, Dallas Mavericks (ESPN: 1.6 per cent; CBS: 1 per cent): Marjanovic just can’t get a break. Last season he showed signs of breaking out, but was limited by a knee injury in the second half. This season, he’s been healthy, but has struggled to break into the rotation in Dallas. On Wednesday, however, Marjanovic reminded us what he can do when given the chance, going off for 31 points, 17 boards and two steals in 31 minutes. Yes, Kristaps Porzingis had the game off to rest, but the fact remains that the emotional Marjanovic is capable of being a monster, so at the very least, tuck this info away.

Aron Baynes, C, Phoenix Suns (ESPN: 23.5 per cent; CBS: 37 per cent): Baynes has been a real DFS darling of late, highlighted by a 37-point, 16-board explosion on March 6. He’s been getting to the line more often this month and has been shooting a bit better overall this season. Perhaps Baynes’ biggest Fantasy impact this season isn’t merely breaking Steph Curry‘s hand.

Gary Harris, SG, Denver Nuggets (ESPN: 36.8 per cent; CBS: 46 per cent): Harris is a versatile player capable of attacking from all angles. Before a quiet game against Dallas on Wednesday, he had at least 14 points in three straight and has been sinking more buckets this month than at any point this season. Pretty much a full-time starter in Denver for the last five seasons, Harris dealt with a minor eye woe last game, but given the current NBA situation, this is a non-factor going forward.

Caleb Martin, SF, Charlotte Hornets (ESPN: 3.4 per cent; CBS: 1 per cent): The Hornets’ future looks brighter thanks to the collection of young talent this team is hording, now including rookie Martin. On Monday, despite fouling out, he poured in 23 points off the bench with four assists, two blocks and three steals. Martin followed that up Wednesday with 19 points, seven boards, four steals and three assists. We’re loving the steals he’s putting up this month, and he’s even pitching with a half block per game in March.

American singer Meat Loaf got his start in 1968 and is still at it today. His debut album, Bat Out of Hell, was released in 1977 and remains his seminal work. The first single from the album was “You Took the Words Right Out of My Mouth (Hot Summer Night).”

By RotoRob
Tags: Sviatoslav Mykhailiuk
This entry was posted on Sunday, March 15th, 2020 at 2:22 pm and is filed under BASKETBALL, RotoRob, The Wire Troll. You can follow any responses to this entry through the RSS 2.0 feed. Both comments and pings are currently closed.