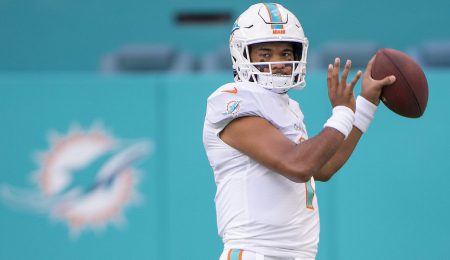 With Week 14 in the books, the first round of Fantasy football playoffs is upon us. This week we feature former Alabama Crimson Tide standout quarterback Tua Tagovailoa, who was selected with the fifth overall pick in the 2020 NFL draft by the Miami Dolphins.

He’s rostered on 38 per cent of teams in ESPN leagues, and makes for a great waiver wire pickup this week as he’s primed to take advantage of a favorable matchup against the New York Jets. In Week 14 against the Giants, Tagovailoa completed 30-of-41 pass attempts for 244 yards with two touchdowns and no interceptions, and will now try to keep the Dolphins firing on all cylinders this weekend.

The jury may still be out on Tagovailoa (at least the Heat mascot seems to love him… see video below), but his improvements have helped fuel the Dolphins’ current five-game winning streak. In fact, it’s been three weeks since he regained the starting job, and twice over that stretch he’s put up at least 17.5 Fantasy points.

Meanwhile, Miami’s second-ranked defense will try to shut down rookie quarterback Zach Wilson and create turnovers and short yardage situations for the offense. In the teams’ previous matchup this season in Week 11, Tua completed 27-of-33 (81.8 per cent completion rate) for 273 yards and two touchdowns.

The red-hot Dolphins are gunning to ride their momentum and keep their playoff hopes alive at home this Sunday. And we just love this matchup against a Jets’ squad that has been struggling all season, has lost two straight and is allowing 31.5 points per game, while compiling an overall record of 3-11 — third worst in the league.

Tagovailoa is a great insurance plan if your starting quarterback goes into Covid protocol or has some question marks heading into Week 15 (for instance, Lamar Jackson of the Baltimore Ravens is listed as questionable while dealing with an ankle issue). Consider a Tagovailoa a great one-week filler addition to help you ride into the second round (and, as usual, we’re not alone in thinking this).

It’s hard to believe that given where he wound up, Roy Ayers got his start as a post-bop jazz artist. In 1975, Polydor Records released Mystic Voyage, signaling his shift from jazz-funk to R&B. The eponymous single from the album hit No. 70 on the R&B singles chart.

By Trevor Penn
This entry was posted on Wednesday, December 15th, 2021 at 11:54 am and is filed under FOOTBALL, The Wire Troll, Trevor Penn. You can follow any responses to this entry through the RSS 2.0 feed. Both comments and pings are currently closed.