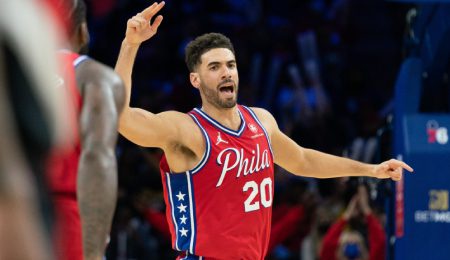 Georges Niang has been a nice surprise for Philly. (Bill Streicher-USA Today Sports)

Welcome back to another week of Fantasy basketball. We’re into November now, and well over a tenth of the way through the season. Milk that wire for all its worth, peeps!

This week, the 76ers are expected to fine Ben Simmons, who simply won’t play ball with the team; the Lakers got ripped by the lowly Thunder; and Chris Paul is trying to rally his Suns as their team owner is being investigated for misconduct.

Now, let’s get to this week’s…

Georges Niang, SF, Philadelphia 76ers (ESPN: 4.9 per cent; CBS: 12 per cent): Niang has been doing a bit of everything lately, and even showed some chops on the defensive glass on Thursday, flirting with a double-double for the second time over the last three. The offense has been there (see video below), and now that the periphery numbers are coming, he’s becoming a Fantasy asset for the first time in his career. Niang has really stepped up with the Sixers shorthanded, enough so that he may deserve more PT when the team gets healthy. Perhaps he’ll even settle in as the sixth man here, so he definitely deserves a long look. We do know that even if he isn’t the most super athletic player, Niang was known for his leadership skills at Iowa St. Philly could use some of that considering the Simmons situation.

Nicolas Batum, SG/SF, Los Angeles Clippers (ESPN: 6.8 per cent; CBS: 34 per cent): In early-January, we recommended Batum thanks to the bigger role he had on the Clippers. Well, he sunk more buckets in January, but didn’t shoot as well in February, and continued to regress in March and April, so it wasn’t our best pick. But we’re back to give Batum more love now as he’s been turning it on offensively of late, scoring at least 12 points in four of his last five, canning tons of treys, pulling down a goodly amount of boards, and racking up nice steal numbers. The French vet has never looked better from downtown (41 per cent), and other than some poor work at the line, he’s off to a strong start, and will remain a real asset as long as Marcus Morris remains out.

Kent Bazemore, SG/SF, Los Angeles Lakers (ESPN: 1.8 per cent; CBS: 5 per cent): We used to think Bazemore got nice minutes with Atlanta, but he’s actually seeing more now with the Lakers, and that should rise still with LeBron James (abdominal strain) out for a week. Having said that, Bazemore is a deep league option only given how low he is on the Lakers’ go-to list. Still, he’s getting more touches this season and has been shooting a touch better from the line. And do remember that Bazemore is a fine source of treys and steals, so give him a look if you need help in this regard.

Devin Vassell, SG/SF, San Antonio Spurs (ESPN: 7.5 per cent; CBS: 36 per cent): A strong defender, Vassell has taken a big step forward on offense as a sophomore, scoring a dozen or more points in all three games this month, while supplying sweet block and steal totals. He’s been used exclusively off the bench so far this season, yet is seeing much more PT and has responded accordingly, quickly morphing into a top 100 player.

Anfernee Simons, PG/SG, Portland Trail Blazers (ESPN: 10.1 per cent; CBS: 28 per cent): We first touted Simons back in January 2020, mostly as a potential DFS play given how injury plagued the Blazers were at the time. Well, he sunk more buckets that month, was even better in February (despite not shooting as well), and then really improved his outside touch over the final two months. This season, he’s become a top bench option in Portland, amping up his three-point shooting even more while looking great from the line early on. Simons has scored 15 or more in four straight games and has canned at least one trey in all nine. Grab him while he’s hot.

Matisse Thybulle, SG/SF, Philadelphia 76ers (ESPN: 12.6 per cent; CBS: 26 per cent): Thybulle is another relative unknown that’s making waves for the 76ers so far. He’s simply blown up in the blocks and steals departments, but has also pitched in with a bit of scoring and some three-pointers. Note that he’ll miss Saturday’s game because of the COVID-19 protocols, so if you need immediate help, look elsewhere. But if you’re seeking an interesting asset to stash, Thybulle could be your man. His PT is up, his shooting touch has improved (both from the floor and the line), and he even managed a double-digit scoring effort last weekend. Colour us intrigued about Boston’s 2019 first rounder.

Late, great American jazz bass player extraordinaire Charles Mingus got his start in 1943 and remained active until his death in 1979. In 1964, he released Mingus Mingus Mingus Mingus Mingus, which included “Theme for Lester Young,” which was previously released as “Goodbye Pork Pie Hat” on Mingus Ah Um.

By RotoRob
This entry was posted on Saturday, November 6th, 2021 at 1:19 pm and is filed under BASKETBALL, RotoRob, The Wire Troll. You can follow any responses to this entry through the RSS 2.0 feed. Both comments and pings are currently closed.