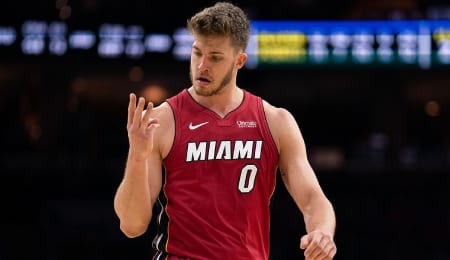 Welcome back to another week of Fantasy basketball. We officially reached the halfway point of the NBA season this week, so no more pussyfooting — it’s time to use the wire and crush your opposition.

This week, Brandon Ingram‘s coming out party continued as he went off for a career high 49 points; Giannis Antetokounmpo says he’s simply not a flopper; and despite having the franchise’s best record ever through 43 games, the Bucks say they are seeking a title as opposed to a record.

Damyean Dotson, SG/SF, New York Knicks (ESPN: 0.1 per cent; CBS: 1 per cent): Just over a year ago, Dotson was on our radar thanks to his stellar play off the bench. Given his massive hike in PT in the second half, it was a solid pick. This season, however, he’s fallen off the map. Being used exclusively off the bench, Dotson’s PT is way down, rendering him an afterthought for Fantasy purposes. However, injuries to RJ Barrett and Reggie Bullock will open up another chance for Dotson (he played 26 minutes on Thursday after Barrett sprained his ankle). At 6’5″, 210, Dotson has good size for a swingman, and after taking a huge step forward last season, he now has an opportunity to work his way back into an important rotation piece, so keep an eye on his performance over the next week.

Meyers Leonard, C/PF, Miami Heat (ESPN: 3.8 per cent; CBS: 5 per cent): Leonard has seen a nice uptick in PT recently, and he should benefit further with Justise Winslow (back) out for the next two weeks. Leonard has been flirting with double-doubles lately, and he’s been jacking up far more three-pointers this month. The veteran seven-footer’s future in Miami is unclear (especially when he steals rebounds from star Jimmy Butler — see video below), but he’s been a full-time starter in his first season with the Heat, giving him an opportunity to provide some value in deeper formats.

P.J. Tucker, SF/PF, Houston Rockets (ESPN: 39.2 per cent; CBS: 47 per cent): A top-notch defender and fine three-point shooter, Tucker’s recent results have been limited thanks to foul trouble. He’s been a fixture in the starting lineup for Houston the last two seasons, and is enjoying his best shooting season (45.6 per cent) since 2012-13. Sure, Tucker’s offensive upside is limited, but if you can use a dude that cans 1.5 three-pointers per game, here you go.

Shabazz Napier, PG, Minnesota Timberwolves (ESPN: 12.3 per cent; CBS: 38 per cent): Given more PT lately, Napier has responded, scoring 16 points with five boards on Monday and following that up with nine dimes on Wednesday. The undersized guard is in line for much heavier minutes now with Jeff Teague getting dealt to Atlanta, so we recommend grabbing him while you can. Napier’s bucket count is already up significantly this month and should only rise from here.

Wilson Chandler, SF/PF, Brooklyn Nets (ESPN: 0.4 per cent; CBS: 2 per cent): Having recently returned from a 25-game suspension, Chandler is slowly finding himself (five boards on Sunday, 10 points on Wednesday), but he’s likely to get a boost and be a nice DFS play on Saturday at the very least with Joe Harris (back) out of action. If the Nets spin out again, Chandler is a likely trade candidate, and that could also be good news.

Malik Beasley, SG, Denver Nuggets (ESPN: 1.7 per cent; CBS: 4 per cent): Wow, where did that come from? On Thursday, Beasley exploded for 27 points, four boards, three steals and an assist. We know he’s a strong, athletic two-guard who can really defend, but this has been a lost season for him after he showed promise in 2018-19. Has Beasley truly re-emerged as a scoring threat?

Brad Wanamaker, PG, Boston Celtics (ESPN: 0.4 per cent; CBS: 1 per cent): With Boston’s backcourt banged up a bit (Kemba Walker is questionable for Saturday, Jaylen Brown is out and Marcus Smart is hurting, but probable), this could be Wanamaker’s time to get some decent PT. Although he struggled with his shot last game (he wasn’t alone among Celtics guilty of not contributing much), Wanamaker still dished out four dimes, and has become a more important piece of the bench this season, sinking more treys along the way. He’s a sneaky DFS play for Saturday.

Luke Kornet, C/PF, Chicago Bulls (ESPN: 3.6 per cent; CBS: 8 per cent): Kornet’s been mostly silent since joining Chicago, but is finally emerging, scoring double-digit points in two straight and three of four (including a season-best 15 points last Saturday). He’s an intriguing DFS play while Wendell Carter Jr. (ankle) is out.

Anfernee Simons, SG, Portland Trail Blazers (ESPN: 2.3 per cent; CBS: 12 per cent): Portland is tremendously banged up right now — especially in the backcourt — so consider Simons a sweet DFS option. The Trailblazers’ first rounder in 2018 (24th overall) is sinking way more buckets this season, although he’s been quiet lately. Now is the undersized guard’s chance to make a statement.

Pasadena, California-based Van Halen released Women and Children First — its third studio album — in 1980. The only single from the album was “And the Cradle Will Rock,” more of a keyboard-driven song than what they had previously released.

By RotoRob
Tags: Damyean Dotson
This entry was posted on Saturday, January 18th, 2020 at 4:26 pm and is filed under BASKETBALL, RotoRob, The Wire Troll. You can follow any responses to this entry through the RSS 2.0 feed. Both comments and pings are currently closed.