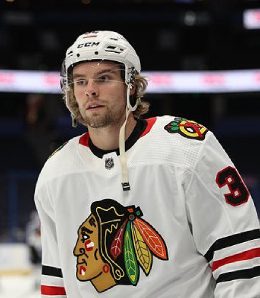 Chicago is a land of opportunity for Brandon Hagel. (Twitter)

Welcome back to another week of Fantasy hockey. We’re just about to wrap up the schedule’s opening month, with plenty of pucking goodness to go!

This week, Wild leading scorer Mats Zuccarello wound up in the NHL Covid protocol; Washington star T.J. Oshie suffered an LBI that will sideline him for weeks; and Lighting forward Nikita Kucherov is dealing with an LBI of his own that will cost him 8-10 weeks.

Brandon Hagel, LW, Chicago Blackhawks (ESPN: 0.6 per cent; CBS: 4 per cent): Hagel, Buffalo’s sixth round pick in 2016, hasn’t really been a Fantasy factor up to this point, but he did open some eyes with the step forward he took in Chicago last season. Now, with Patrick Kane on the Covid list, Hagel finds himself playing on the top line with Jonathan Toews (just back from Covid himself) and Ryan Carpenter, and Hagel is already benefiting from Toews’ playmaking skills (see video below). It may be a short term situation, but Hagel deserves some attention right now. This dude was a big scorer in junior, so we’d suggest keeping an eye on him, even if he isn’t lighting the world on fire early on.

Juuso Valimaki, D, Calgary Flames (ESPN: 0.2 per cent; CBS: 4 per cent): Calgary’s 2017 first round pick came into his own last season, recording 11 points in 49 games despite seeing slightly less PT than he did in his rookie campaign. Valimaki isn’t likely to light up the scoresheet, yet he did actually lead Flames defensemen in A/60 last season, so there’s potential here. He’s getting solid third pairing minutes and twice this week in a three-game span he recorded four minutes in penalties, so can provide a boost in leagues that track that. Consider Valimaki in very deep formats for now, but don’t be shocked if he becomes a bigger asset as the season progresses.

Zack Kassian, RW, Edmonton Oilers (ESPN: 16.9 per cent; CBS: 28 per cent): It took some time for Kassian to find his game after getting dealt to Edmonton in 2015, but he ultimately settled in as a mid-teen scorer. Last season, however, was a real struggle for the tough veteran, and he dealt with an injury scare in the preseason. But the Oilers are off to a huge start and Kassian’s been a big part of that success, scoring three times (on only four shots on goal). Combine that offense with his usual hits and penalty minutes, and you really want to add this big, strong dude to your team. It’s become clear that Kassian will never justify his selection as the 13th overall pick in 2009, but that doesn’t mean he’s not a useful Fantasy asset.

New Zealand new wavers Mi-Sex burst onto the scene in 1978 and really captured our attention — especially with its 1979 debut effort Graffiti Crimes. The second single from this album was “Computer Games,” which became a No. 1 hit in Australia.

By RotoRob
This entry was posted on Saturday, October 30th, 2021 at 2:23 pm and is filed under HOCKEY, RotoRob, The Wire Troll. You can follow any responses to this entry through the RSS 2.0 feed. Both comments and pings are currently closed.