How the Mighty Chicago Blackhawks Have Fallen 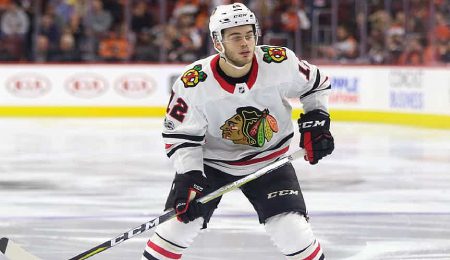 Alex DeBrincat has been a bright spot for the troubled Blackhawks. (Amy Irvin/The Hockey Writers)

With online sportsbooks gearing up to launch in Canada, there’s already a bunch of sites that have been approved. For instance, Fanduel Sportsbook Canada is expected to launch before the end of the year and it already has some new user promos available. If the launch goes as expected, NHL fans will have more than enough time to get their bets in before the playoffs next spring.

One team that we expect very few bets to be placed on is the Chicago Blackhawks, unless, that is, sportsbooks are taking wagers for the biggest trainwreck of the season.

Believe it or not, Chicago’s odds to make the playoffs were decent heading into the season; that’s sure changed now, as things have spiraled into an absolute shit show — both on and off the ice.

As you recall, the Blackhawks were recently the envy of the NHL, winning three Stanley Cups over a six-year span in the first half of the 2010s. Given how things stand now, that seems like a lifetime ago.

Chicago’s team has been making news for all the wrong reasons this season. The exposure of an ugly sexual scandal has shredded the team’s hierarchy — both current and past — and put the NHL as a whole under fire, even though Commissioner Gary Bettman believes the league handled everything as it should.

Given that backdrop of turmoil, the on-ice product hasn’t exactly helped take the sting out of this horrible situation. After dropping their first nine games of the season, the Blackhawks finally won a game on Monday, but have since dropped the two subsequent contests.

Let’s take a look a look at how a few Chicago players are faring through the first 15 per cent of the schedule.

On the plus side, Alex DeBrincat continues to prove that his down season two years ago was an outlier. He potted another pair of goals on Wednesday (see video below) — the 20th time in his career he’s had a multi-goal effort — giving him six markers already, and putting him on pace for a career tying 41 tallies. When you consider that DeBrincat did as well as he did last year despite contracting COVID-19, it’s easy to get excited about his future. Oh, did we mention he’s still just 23? This kid is definitely one Blackhawk worth pursuing.

Marc-Andre Fleury has taken over as the No. 1 goalie in Chicago this season after Vegas dealt him away to clear cap space. However, he’s off to an ugly start. MAF seemed to be getting his act together with back-to-back strong outings before getting ripped for four goals on just 32 shots against the Canes on Wednesday and then another five on just 33 shots on Friday. With a GAA of 4.11 and a save percentage of .881, he’s never looked worse.

Another struggling newcomer is defenseman Jake McCabe. He dealt with a major injury last season, and was then signed by Chicago as a free agent to shore up the second pairing. Um, ya… it hasn’t gone well so far. McCabe is seeing more ice time, but has managed just a single assist and is -11. Heading into Friday’s action, he had turned the puck over six times, and while he’s racking up the hits and blocks, he’s not exactly driving play (Corsi For of 37 per cent).

Here’s a safe bet for you: Chicago Head Coach Jeremy Colliton‘s job isn’t exactly secure. However, do the Hawks really want to axe him given the current lack of organization continuity in the wake of the Kyle Beach fiasco?

Oops… spoke to soon on that one!

One thing is clear, Chicago has a long way to go to get back to contention, with many battles to fight as it tries to earn its way back towards something resembling a sense of settlement. The stench of this episode will linger for a long time.

That 1979 No Nukes album just keeps on giving. Here’s Crosby, Stills and Nash again, with “Teach Your Children.”

By RotoRob
This entry was posted on Saturday, November 6th, 2021 at 4:46 pm and is filed under HOCKEY, RotoRob, Team report. You can follow any responses to this entry through the RSS 2.0 feed. Both comments and pings are currently closed.