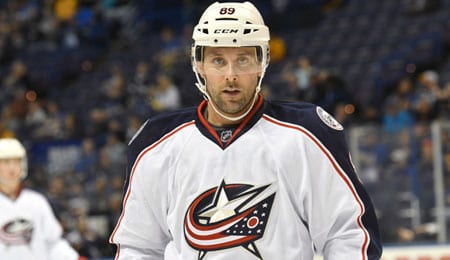 Sam Gagner sure has found a home in Columbus. (Keith Gillett/Icon Sportswire)

Sam Gagner, C/RW, Columbus Blue Jackets (ESPN: 30.8 per cent; Yahoo: 30 per cent): The Jackets have emerged as a potential Eastern Conference powerhouse, and it’s due in large part to the team scoring by committee. A former Edmonton and Arizona castoff, Gagner has found a home in Columbus, and is proving to be a great teammate (see video below). In three games last week, he had three goals, six points, a plus-4 rating, two power play points and 11 shots on goal.

Anders Lee, C/LW, New York Islanders (ESPN: 10.1 per cent; Yahoo: 7 per cent): Unlike the Blue Jackets, the Islanders have been unnaturally bad this season. That said, some key players are starting to show signs of life, including Lee. He had three goals, five points, a plus-4 rating, a power play point, a game-winning goal and 13 shots on net in four games last week.

Mikael Backlund, C, Calgary Flames (ESPN: 30.8 per cent; Yahoo: 9 per cent): It’s a topsy-turvy world in the NHL and the West is no different. Calgary sits on top of the Pacific Division, and it’s thanks to guys like Backlund. In four games, he had a goal, four points, a plus-1 rating, two power play points and 12 shots on goal. Backlund only has 15 points on the season, but the season is still young and he’s a good option off the bench.

Andrew Shaw, C/RW, Montreal Canadiens (ESPN: 29.3 per cent; Yahoo: 44 per cent): Montreal’s token sheet of sandpaper, Shaw can also put up the points — as if we didn’t know that from his time in Chicago. He had a goal, five points, a plus-3 rating, a power play point and seven shots on goal in four games last week.

Antti Raanta, G, New York Rangers (ESPN: 12 per cent; Yahoo: 21 per cent): Henrik Lundquist will always be king of New York, but it was his backup who led all NHL goaltenders last week. In two starts, the Finn had two wins, a 0.50 goals against average, a .977 save percentage and a shutout. Raanta has seven wins, a 1.83 goals against average and a .939 save percentage so far this season, making him the best No. 2-3 goaltender on your league’s waiver wire.

By Dakota Case
Tags: Columbus Blue Jackets, Sam Gagner
This entry was posted on Sunday, December 11th, 2016 at 2:02 pm and is filed under Dakota Case, HOCKEY, The Wire Troll. You can follow any responses to this entry through the RSS 2.0 feed. Both comments and pings are currently closed.