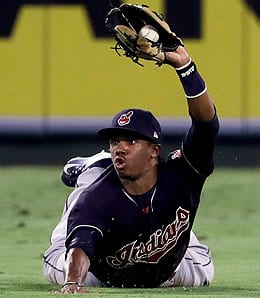 Greg Allen is starting to flash tools beyond his superb leather. (AP)

Welcome back to another week of Fantasy baseball. August is in its death throes, so time runs short for those of you still with aspirations of winning a title. Work that wire!

This week, Mike Trout returned to action following an absence for a death in the family, hitting a triple on the first pitch he saw; Salvador Perez channeled his inner Babe Ruth when he called his shot for a wheelchair-bound young fan and made good, hitting the longest home run by a Royal this season; and Aroldis Chapman (knee) received a plasma-rich platelet injection Friday, sidelining him for at least two more weeks.

Greg Allen, OF, Cleveland Indians (ESPN: 13.5 per cent; CBS: 9 per cent): The Tribe has really struggled to settle on an everyday centrefielder this season, and Allen — among others — endured his issues (299 OPS in June). He rebounded a tad in July, but has been on fire in August (.360 BA with seven steals), entrenching himself in the lineup as a result. With both Leonys Martin and Rajai Davis out, Allen is seizing the opportunity. Allen has flashed serious leather (see video below), and with his speed, makes an obvious pinch running option, but he’s now proven he’s capable of more than being just a late-inning defensive replacement. He has offered a bit of gap power, but really, it’s all about the speed with him, so if you need swipes to take you over the top, grab him.

Enyel De Los Santos, SP, Philadelphia Phillies (ESPN: 0.3 per cent; CBS: 6 per cent): After getting farmed out a couple of weeks ago, De Los Santos has been lights out at Triple-A, hurling three straight quality starts, each better than the previous one. He’s racking up the wins in the minors and deserves another look in September, when he could be a useful bullpen piece or even get another crack at the rotation.

Matt Holliday, OF, Colorado Rockies (ESPN: 0.7 per cent; CBS: 1 per cent): Former Colorado star Holliday is back where it all belong, getting recalled by the Rox on Thursday. It’s unclear how much PT the vet will get, but he delivered a pinch-hit single in his only at-bat on Friday. Holliday proved he can still rake during the couple of weeks he spent at Triple-A. Now let’s see if he has anything left to offer in the majors. Consider him a sneaky add in deep NL-only leagues for now.

Isiah Kiner-Falefa, 3B/C, Texas Rangers (ESPN: 11.4 per cent; CBS: 26 per cent): Kiner-Falefa has cooled this month after a big July, but he’s a great DFS play against lefties (he faces one on Saturday). We love the fact he’s improved his contact rate from Triple-A, and based on his track record he’s likely capable of upping his walk rate as well. Better yet, he offers catcher eligibility, making him a definite asset in AL-only or two-catcher formats. Texas is hoping he can improve his pitch blocking ability, and if he can, he’ll become a more intriguing dynasty league option.

Kendrys Morales, DH, Toronto Blue Jays (ESPN: 32.9 per cent; CBS: 32 per cent): Morales had been in a deep frost, but he’s gotten progressively better as the season has gone on, and now he’s on fire, spanking dingers in each of the last five games (with six in total over this span). An eight-game hit streak has him up to a more respectable .260 and overall, he’s hitting fewer ground balls this year. Better yet, Morales has never hit fewer infield flies than he has this season. His power could be a nice asset down the stretch.

Brett Anderson, SP, Oakland Athletics (ESPN: 23.4 per cent; CBS: 46 per cent): Another veteran that has returned to his original team this season is Anderson, and so far, the reunion has been very successful. The notoriously fragile hurler is even looking like a horse recently, pitching at least seven innings in three of his last four starts — each of the trio being shutout efforts. Anderson has been efficient with his pitch counts, which is helping save his body from another breakdown, and he’s become an important part of a rotation that’s really been amazing lately. His command seems much sharper this season, and the fact he’s nibbling less is helping him put up some impressive outings.

Matt Harvey, SP, Cincinnati Reds (ESPN: 15.5 per cent; CBS: 39 per cent): Harvey was claimed by the Brewers on waivers, but the Reds opted to keep the hurler, suggesting they may try to re-sign him this winter. And why not? The Dark Knight is finally starting to look more like himself recently, giving up just three runs over his last three starts while averaging nearly a punchout per frame. While he’s hardly had a great season, he’s been substantially better since coming to Cincy and has certainly improved from last year’s disaster. Harvey is worth grabbing for the stretch run.

Aaron Sanchez, SP, Toronto Blue Jays (ESPN: 15.4 per cent; CBS: 41 per cent): Sanchez has been sidelined for the last two months with a finger injury, but was finally activated on Saturday. He’s actually been healthier this year than he was in 2017, which is a sad comment on his fragility. And while Sanchez has been harder to hit this year, his bottom line results haven’t been as good. He’s employed his changeup way more than ever, with poor results. We’d like to see Sanchez go back to using his heater a bit more, but given his upside, he’s definitely worth grabbing now to see how he’ll do over the final few weeks.

We’re going back to the Grateful Dead well today, with “El Paso,” recorded live in the
St. Paul Auditorium in St. Paul, Minnesota in February 1973.

By RotoRob
Tags: Greg Allen
This entry was posted on Saturday, August 25th, 2018 at 3:44 pm and is filed under BASEBALL, RotoRob, The Wire Troll. You can follow any responses to this entry through the RSS 2.0 feed. Both comments and pings are currently closed.