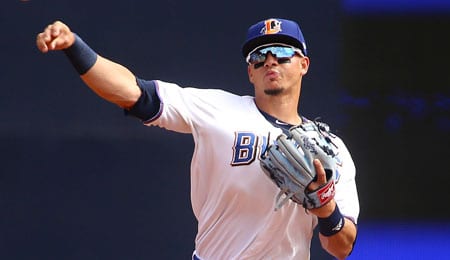 There’s nothing left for Willy Adames to prove in the minors. (Medium)

Welcome back to another week of Fantasy baseball. We’re now just a week away from the Padres-Dodgers series in Monterrey, Mexico as the sport continues to try to gain a global foothold.

This week, the Cubs have played their last four games without former NL MVP Kris Bryant, dealing with a suspected concussion (although he’s expected back Saturday); the Pirates have opted to give Jung Ho Kang another chance after his DUI caused him to miss all of last season; and White Sox reliever Danny Farquhar (aneurysm) has progressed to being able to do light walks, fantastic news considering how grave things looked just a week ago.

And now, let’s get to this week’s Fantasy baseball recommendations, with a bit of forward-looking bent to them this time around…

Willy Adames, SS, Tampa Bay Rays (ESPN: 1.4 per cent; CBS: 19 per cent): Acquired from Detroit in the three-team deal that sent David Price to the Tigers in 2014, Adames could turn out to be the gem of the trade. Adames is currently sporting a wRC+ of 192 at Triple-A, showing he really has nothing left to prove in the majors. Still, Tampa Bay, being Tampa Bay, will likely wait until after the Super 2 deadline before bringing him up. But make no mistake: this kid is ready. On Sunday, he hit his first career grand slam; on Monday, he had four hits for the cycle (see the monster dinger in the video below), three RBI and two runs; on Tuesday, he scored another two runs with a hit, a walk and a steal; and then bashed another two hits with a walk on Wednesday, to raise his season average to .355. The Rays’ top prospect could be the next Anthony Rendon — at shortstop.

Danny Valencia, 3B, Baltimore Orioles (ESPN: 0.3 per cent; CBS: 2 per cent): Injuries to Oriole infielders have guaranteed that Valencia is going to get PT for the foreseeable future, so it’s time to consider him in deeper AL-only leagues. On Thursday, he delivered two hits, including a solo dinger, to snap a slump. Valencia started the season as a part-timer, and hasn’t done much yet, but he does have some pop — that was his third jack of the season. He’s shown the ability to hit for a decent average (.267 career) and be productive (66 RBI in each of the last two seasons), so it’s worth watching to see what he does with this opportunity.

Willie Calhoun, OF, Texas Rangers (ESPN: 6.1 per cent; CBS: 40 per cent): Calhoun is an integral part of the Rangers’ plan, but he’s currently toiling away at Triple-A in order to (ostensibly) improve his glove work (read: so the team can maintain control over him for another year). He’s a great contact hitter with serious power potential, and while he’s started slowly at Triple-A this year, once Super 2 passes, this kid should get the call. Calhoun is arguably one of the best pure hitters in baseball that’s not currently in the majors, so stash him while you can.

Michael Kopech, SP, Chicago White Sox (ESPN: 7 per cent; CBS: 47 per cent): Boston’s first round pick in 2014, Kopech was dealt to the ChiSox in 2016 in the Chris Sale trade. Last year, Kopech stayed healthy and enjoyed a fine season, mostly at Double-A, before a late-season move to Triple-A. This year, he’s cut his ERA significantly early on at Triple-A, but the Pale Hose aren’t rushing to promote him. Still, your chance to stash him may soon end if he keeps racking up prodigious punchout numbers.

Tyler Anderson, SP, Colorado Rockies (ESPN: 12 per cent; CBS: 19 per cent): Note that Anderson had to come out of Friday’s game early with chest discomfort, so this recommendation is contingent upon him being healthy enough to take the bump for his next outing. The fact is, if you remove his first start of the season, his line is pretty damn impressive: four starts, 22 2/3 IP, 19 hits, seven runs (five earned), two homers, 10 walks, 24 strikeouts and a 1-0 record with a 1.99 ERA. Check the injury reports, and be ready to pounce if Anderson’s prognosis is good.

Addison Reed, RP, Minnesota Twins (ESPN: 12 per cent; CBS: 28 per cent): Reed has been scored on in two of his last three appearances, but is enjoying better hit rates in the early going. A 40-save man five years ago, his career seemed to stall in Arizona, but he’s been much better lately, and with Fernando Rodney stinking it up, it may just be a matter of time before Reed gets a chance to earn saves again.

Jace Peterson, 2B, Baltimore Orioles (ESPN: 0.1 per cent; CBS: unowned): Peterson is the new flavour of the week at the keystone corner with Jonathan Schoop still at least a week and a half away. Now that Tim Beckham is out, too, Peterson should get plenty of PT.

Mike Fiers, SP, Detroit Tigers (ESPN: 3.6 per cent; CBS: 8 per cent): When he was at Triple-A, Fiers used the Saw theme as his walk-up music. How’s that for intimidating? His hit rate is a tad worrisome, but he’s pitched well in three of four outings.

Hector Santiago, RP, Chicago White Sox (ESPN: 0.2 per cent; CBS: 1 per cent): Now the long man for the ChiSox, he’s racking up lots of Ks and will likely get some spot starts, making him worth looking at in very deep AL-only leagues.

Dane Dunning, SP, Chicago White Sox (ESPN: NA; CBS: 4 per cent): Dunning was dominating High-A, so the White Sox bumped him up to Double-A, their first minor league promotion of the season. Dynasty league owners need to pay attention given his amazing command.

Brent Suter, SP, Milwaukee Brewers (ESPN: 2.1 per cent; CBS: 9 per cent): Suter has been decent in four of his six outings, and generated tons of foul balls against the Cubs on Friday, keeping them generally off balance. He’s pitched much better than his ERA suggests (3.80 FIP).

By RotoRob
Tags: Willy Adames
This entry was posted on Saturday, April 28th, 2018 at 12:31 pm and is filed under BASEBALL, RotoRob, The Wire Troll. You can follow any responses to this entry through the RSS 2.0 feed. Both comments and pings are currently closed.