The Wire Troll: DJ Stewart Gets Opportunity for Orioles 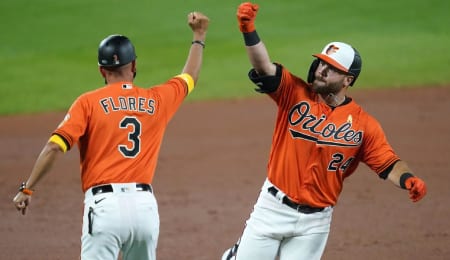 Welcome back to another week of Fantasy baseball. We’re nearly 15 per cent of the way through the season already, but there is tons of time left to decide whether your team is in it or not. In the meantime, leverage that wire.

This week, Christian Yelich‘s stay on the IL for his back has been extended; injury-riddled Minnesota has now lost Miguel Sano (hamstring) to the IL; and Dinelson Lamet (forearm) has landed on the IL with the threat of a second Tommy John procedure looming.

DJ Stewart, OF, Baltimore Orioles (ESPN: 2 per cent; CBS: 4 per cent): In mid-September, we last pimped Stewart as a nice source of power and while he did cool off, he proved a productive pickup. Now, with Anthony Santander out, we’re back to give Stewart some more love. Even if he has yet to show the same kind of power and productivity he hinted at last year (although he did in the spring, as you can see below), Stewart has recorded hits in five of the last six games and showed slight improvement in his batting eye. We’re still waiting for B-More’s 2015 first rounder to really establish himself as a big leaguer so we’re curious to see what he’ll do with this opportunity.

Phillip Evans, 3B, Pittsburgh Pirates (ESPN: 26.3 per cent; CBS: 32 per cent): Evans hasn’t exactly been tearing it up lately as he struggles to make contact, but he owns the hot corner in Pittsburgh for a while longer with Ke’Bryan Hayes suffering a setback. If Evans can get back to the batting eye he showed last year, we’ll get even more excited. Still, the fact that he’s already barreled five balls is promising, so keep an eye on him while he has the gig.

Justin Dunn, SP, Seattle Mariners (ESPN: 2.2 per cent; CBS: 7 per cent): The former Met first round pick enjoyed a pretty solid rookie effort last season, and we love the fact that his strikeout rate keeps rising. The Boston College product walked just one while fanning five over five frames against the BoSox on Thursday and has yet to suffer a defeat this season. So far, Dunn is outperforming his 2021 ZIPS projections, so take a look at him in AL-only leagues.

Kendall Graveman, RP, Seattle Mariners (ESPN: 26.1 per cent; CBS: 40 per cent): It’s been several years since Graveman last popped up on our Fantasy radar as he’s really struggled to duplicate his fine 2016 effort. Now shifted full-time to the bullpen, he’s morphed into a real asset as a high-heat reliever and he’s barely been touched so far this season. Graveman hurled his fifth straight perfect outing on Thursday, and with a perfect record and ERA, microscopic WHIP, nice K total and mix of saves and holds, he’s a great addition in all formats. Add him to the list of failed starters who found themselves as a relief ace, but one area of concern is a career-low groundball rate early on. Graveman has definitely turned a corner here, but there may be some luck involved as well.

Ryan Weathers, SP, San Diego Padres (ESPN: 12.7 per cent; CBS: 32 per cent): As discussed in our intro, Limet is hurt again, and Weathers made a strong claim to take advantage by limiting the powerful Dodgers to a single hit over 5 2/3 frames on Thursday. With shutout ball in back-to-back starts, Weathers is suddenly in the early stages of a fantastic rookie season. He had appeared out of the bullpen three times to begin the season, but if he can secure a rotation slot, he could very quickly become a must-own asset. Weathers is inducing plenty of ground balls early on, and that’s a promising trend.

Cole Irvin, SP/RP, Oakland Athletics (ESPN: 5.5 per cent; CBS: 10 per cent): Another young (ish) starter that’s making his mark this season is Irvin. After two failed seasons pitching mostly out of the bullpen in Philly, he was acquired for cash this winter and has done a great job stepping into the A’s rotation. What we love about Irvin is that he’s been doing a great job of limiting long balls; in fact, he hasn’t given up any in three of his four starts so far. If this continues, he could one of the steals of the season.

AC/DC was originally formed in Sydney in 1973. In 1980, the band released its seventh album, Back in Black, dawning a new age for the group after the death of lead singer Bon Scott in February of that year. The title track was the effort’s third single.

By RotoRob
This entry was posted on Saturday, April 24th, 2021 at 4:38 pm and is filed under BASEBALL, RotoRob, The Wire Troll. You can follow any responses to this entry through the RSS 2.0 feed. Both comments and pings are currently closed.