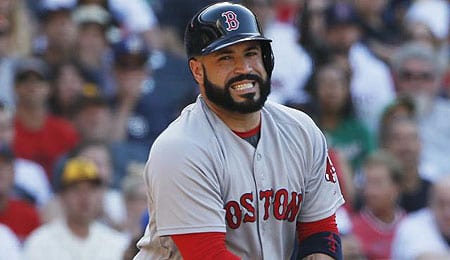 The 2016 Fantasy baseball season is now in the books and here’s hoping you had a great campaign and that our waiver wire picks played a role in that.

Oh sure, we had plenty of misses among our picks, and because of the weekly nature of our column it means that some hot free agents get scooped up days before we can tout them, but the fact is that if you managed to wound up with, say, five or six of these guys on your team, chances are you were a pretty happy camper this season.

Without further ado, we present the 2016 Wire Troll All-Star Team…

Sandy Leon, Boston Red Sox: This Venezuelan has never really shown great skills, but something really worked for him this year and he wound up as easily the best backstop available off the wire in a season bereft of such options. We recommended him in mid-July and he wound up hitting .355 with 10 runs that month. Leon continued to rake in August before cooling down the stretch. He drove in 35 runs in half a season’s worth of action after managing all of eight ribbies in the first four years of his career. Better yet, Leon continues to flash power in the postseason (see video below).

Mike Napoli, Cleveland Indians: Napoli was a dude we picked in the first week of the season, with tremendous results. You know he has power, but also tends to whiff a lot. But what you probably didn’t see coming was that at the age of 34, Napoli would set career highs in games, at-bats, runs, hits, homer and RBI while tying his personal best in walks. The veteran stayed healthy while even pitching in with a few swipes as he enjoyed his finest campaign since his first season in Boston in 2013.

Martin Prado, Miami Marlins: Prado is another Venezuelan that was a waiver wire darling this season. Also qualified at third base, this veteran stayed healthy, put up some fine counting cats for a keystone corner man, and wound up batting .305 for the first time since 2010.

Aledmys Diaz, St. Louis Cardinals: We should have been prepared for how good Diaz was when he hit .380 in a 14-game trial at Triple-A last year. Another early season pick, he jumped out of the gates this year and put together a wonderful rookie season, proving quite productive while batting .300. Diaz showed a nice combination of solid contact skills with very nice slugging, finishing second on the team in offensive WAR despite playing in just 111 games.

Eduardo Nunez, Minnesota Twins/San Francisco Giants (also qualifies at 3B): A hammy woe slowed Nunez down towards the end of the campaign, but not before he enjoyed his finest season. When we recommended him early on in the season, he was still with Minnesota, where he was hitting better than he ever had. Traded to the Giants, Nunez wasn’t quite as productive in San Francisco, but he still managed to swipe 40 bags overall — one of just five players to reach that total this season.

Adam Duvall, Cincinnati Reds: In late-April, Duvall headlined our column shortly after he emerged victorious from his platoon situation and became the everyday left fielder. Boy, did he ever take off after that. Finally given an opportunity to be a full-timer, Duvall scored a ton of runs, displayed tremendous power and proved he can sustain big numbers over the course of a season. His work as a basestealer left something to be desired, but guys that mash over 30 homers with over 100 RBI aren’t generally available on the wire.

Odubel Herrera, Philadelphia Phillies: Another early-season pick that provided great returns, Herrera was arguably the Phillies’ MVP this season as the team surprised many by hanging in there most of the year. Another Venezuelan (sensing a trend that Fantasy owners are undervaluing players from this country?), he took a nice step forward in his sophomore season, nearly doubling his homer total, while also increasing his stolen base numbers. Herrera has shown he hits for average, will swipe plenty of bags and has emerging power. Think he’ll come cheap again next season? Um, no.

Jackie Bradley Jr., Boston Red Sox: JBJ had a streaky season, but when he was on — like during his 29-game hit streak and his big power barrage down the stretch — he was fantastic. His extra-base pop wasn’t quite as impressive as what he did in a half season last year, but he shattered all his career highs in the best campaign of his career.

Jameson Taillon, Pittsburgh Pirates: Taillon missed some time with injuries, but sure was dynamic when active. He put together a splendid rookie effort which included a fine ERA, a goodly amount of strikeouts and a few wins. We especially love Taillon’s command and that should stead him well going forward.

Jeremy Hellickson, Philadelphia Phillies: Hellickson added a sinker this year, and it seemed to make a world of difference as he put together his finest season since he was a rookie. His control was much better, helping him to a very nice WHIP. Hellickson enjoyed a better record on a bad team, which isn’t easy to do, turning himself into a solid streaming option in the process.

Jharel Cotton, Oakland Athletics: Cotton seems like a late-bloomer, almost an after thought as a prospect and one generally assumed to wind up in middle relief. Yet, there he was this year, looking absolutely filthy in five starts for the A’s down the stretch. Cotton was almost unhittable, leading to a sparkling ERA. We doubt he’s that good, but he sure as hell was a great Fantasy asset over the final month of the season.

Tyler Anderson, Colorado Rockies: Another rookie, Anderson doesn’t get a lot of ink, but he put up a very serviceable ERA while spending half his time pitching at Coors. He managed to win a few games on a lousy team and had a real positive impact, finishing second among Rockie hurlers in WAR despite only making 19 starts.

Edwin Diaz, Seattle Mariners: Diaz spent 2015 as a starter, but early this year, the Mariners began the transition of making him a reliever — a good call given his slight build. He sure took to it quickly. After just 10 relief appearances at Double-A, Diaz was brought to Seattle and before you knew it, he replaced Steve Cishek as the Mariners’ closer. Diaz had a rookie season for the ages, proving very tough to hit, stingy on the long ball and displaying fine control for someone who racked up as many Ks as he does (over 15/9).

Seung Hwan Oh, St. Louis Cardinals: The Cards made a bit of a splash last offseason when they penned veteran reliever Oh off the international free agent market. But few expected him to take over as the closer and wind up in the top 10 in the NL in saves. Oh was virtually unhittable, putting up a sparkling ERA and really limiting dingers. His stuff clearly plays on both sides of the ocean.

Jeanmar Gomez, Philadelphia Phillies: Yup, Gomez is also Venezuelan. Man, this country knows how to produce good ballplayers. He took over as the Phillies’ closer very early in the season, and never really looked back, setting a career high in games. Yes, Gomez lost more games than you’d like, and his ERA wasn’t great, but getting 35+ saves off the wire is a coup.

Now it’s your turn. Let us know in the comments below which players you scooped off the waiver wire this year that made a big difference to your Fantasy baseball team.

By RotoRob
Tags: Boston Red Sox, Fantasy Baseball, Sandy Leon
This entry was posted on Monday, October 10th, 2016 at 3:13 pm and is filed under BASEBALL, RotoRob, The Wire Troll. You can follow any responses to this entry through the RSS 2.0 feed. Both comments and pings are currently closed.