The Wire Troll: Ilya Kovalchuck Killing it in Montreal 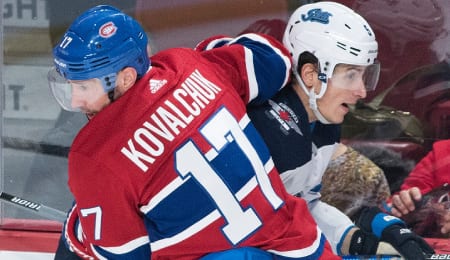 Ilya Kovalchuk has fit in well in Montreal. (The Canadian Press/Graham Hughes)

Welcome back to another week of Fantasy hockey, our first column of the new decade! We trust you had a good break and are now ready to make your second half push for puck glory.

This week, Pekke Rinne became just the 12th goalie in NHL history to score a goal; Shayne Gostisbehere‘s fall from stardom has continued and now he’s out for three weeks following knee surgery; and Dallas blueliner Stephen Johns is nearing a return after missing over a season and a half because of headaches.

Ilya Kovalchuk, LW, Montreal Canadiens (ESPN: 20.6 per cent; CBS: 38 per cent): The last time we checked in on Kovalchuk, he was coming out of a slump for the Devils. Much has happened since then, and he now finds himself in Montreal, with some very promising early returns, including three helpers in two games before getting shut out on Thursday. Not bad a for a dude that hadn’t played a game in almost two months. Kovalchuk is seeing much more ice time with the Habs, including duty on the first power play unit, which is what makes him an attractive addition right now. This is one gifted offensive player and, man, can he ever shoot the puck. Not only that, but Kovalchuk has already proved himself for Montreal — in the virtual world (see video below).

Antti Suomela, C, San Jose Sharks (ESPN: unowned; CBS: unowned): Looking for a deep league sleeper? Suomela only recently returned from a stint on the IR, and hasn’t played much this season, but saw an uptick in PT on Thursday, topping 12 minutes. With Logan Couture out six weeks with busted ankle, now is Suomela’s chance to move up the depth chart and stat producing. Suomela showed some decent playmaking skills last season, and the chances are starting to come (four shots in the last two games). He’s averaging a hit per game, and we expect some point numbers to follow soon.

Sam & Dave consisted of tenor Sam Moore and baritone/tenor Dave Prater. Here’s another track from their 1969 compilation, The Best of Sam & Dave, “Still is the Night,” a track written by Booker T. Jones and Eddie Floyd and co-produced by Isaac Hayes.

By RotoRob
Tags: Ilya Kovalchuk
This entry was posted on Saturday, January 11th, 2020 at 1:59 pm and is filed under HOCKEY, RotoRob, The Wire Troll. You can follow any responses to this entry through the RSS 2.0 feed. Both comments and pings are currently closed.