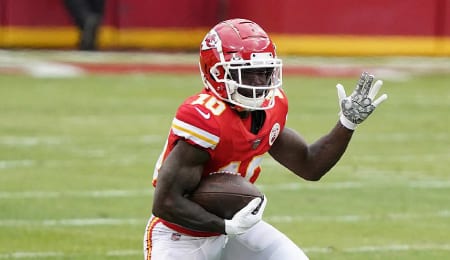 We all enjoyed another great week of NFL playoff action, highlighted by the Packers pulling away in the second half, and let down by the Ravens’ inability to show any offensive consistency.

So, we are down to the final four for Super Bowl LV. Let’s examine each team, in descending order in terms of likelihood of winning it all. These expectations are based on odds, so obviously there are exceptions to the rule, but it seems like the most sensible way to handle this (even though we all know that Green Bay is walking away with the hardware, right?).

For starters, on Sunday stud QB Patrick Mahomes hurt his toe before suffering a concussion in the second half that knocked him out of the game. This is a huge question mark heading into the AFC Championship game, but you could interpret the tweet below to suggest that he’ll be ready to play against the Bills this weekend.

Still, the fact is that KC barely survived Cleveland’s second-half surge to hold on for a slim five-point win. Make that eight straight wins by six points or fewer for the Chiefs, the longest such streak in NFL history. You can see why we think their bubble may burst.

In five trips to the red zone, the Chiefs only managed to score twice, a level of inefficiency that will likely cost them against tougher opponents like Buffalo or, down the road, Green Bay.

Tyreek Hill, meanwhile, was exactly as we predicted — studly. When he wasn’t pushing his coach (see video below), he feasted on the Browns secondary, pulling in eight of 10 targets for 110 yards.

Aaron Rodgers, who led the league in EPA/CPOE, is the likely MVP this season. But his bigger goal is to get the Pack back to the Splendid Bowl for the first time since 2010. And for the first time in his career, Rodgers finally gets a chance to lead Green Bay to an NFC title at home, even if the pandemic more or less renders this home field advantage moot.

After he led the Packers over the Rams 32-18 on Saturday, what’s so exciting about this weekend’s game against the Bucs is that Rodgers gets to square off against Tom Brady. What a dream matchup!

Sure, Rodgers may have just the one Super Bowl ring to his credit, but even if Green Bay falls short in its quest for another one this season, it’s hard to overlook what he’s done over his career.

After putting up 296 yards passing with two TD passes on Saturday, he now has a dozen career playoff games in which he’s thrown for 250 or more yards with at least a pair of touchdown strikes. That ties Rodgers with Hall of Famer Joe Montana for second place all-time. Don’t even try to tell us that Rodgers is not in the discussion among the greatest quarterbacks to ever play the game. Winning another ring won’t seal his legacy; it will simply add to it.

So much for the highly-anticipated Josh Allen–Lamar Jackson showdown, huh? It was a defensive play that turned the game as Buffalo cornerback Taron Jackson picked off a pass in the end zone and ran it back 101 yard for a score the sealed the Bills’ 17-3 win over Baltimore.

Considering the roll he’d been on, we were expecting a bigger performance from Allen, but the Raven D really held him in check in what was a surprisingly tight defensive game. It’s not that he was bad, it’s just that the yardstick for what’s considered a good game from him has changed so dramatically over the last year. But if Allen’s not substantially better against a KC team that held him to his worst game of the season back in Week Six, then Buffalo’s dream of finally winning a Super Bowl will likely come crashing to end this weekend.

The Bills head into their matchup against the Chiefs as one of the league’s hottest teams, having won eight straight, matching the second-longest run in franchise history. However, if Buffalo doesn’t control the ball substantially more than it did against B-More (just 55 plays in under 25 minutes of possession), this game could get very ugly.

In the regular season, Brady really struggled against the Saints, but finally delivered a solid effort Sunday, leading the Bucs to a 30-20 win, and a spot in the NFC Finals.

Let’s be clear: he wasn’t as good as he was in the Wild Card game against Washington, but he was definitely better than he was in two losses against New Orleans earlier this season. In the season opener, Brady was picked twice, and in early-November, he had his worst game of the campaign in tossing three interceptions and enduring his only TD-pass free game of 2020.

In fact, Tampa Bay made history in this win. No other team in NFL history had been outscored by an opponent by 40 or more points in the regular season and then turned around and beat that team in the playoffs. Add another record in the books that Brady had a hand in.

Apparently, the old man has lightened up quite a bit since leaving New England. Now let’s see if that can translate into yet another trip to the Super Bowl.

American musician Don Henley is best known as the founder of The Eagles, but had a damn fine solo career as well. In 1984, he contributed to the soundtrack of Coyote Ugly with “All She Wants to Do Is Dance,” a song penned by Danny Kortchmar, the celebrated session guitarist who has worked with Linda Ronstadt and James Taylor, among others.

By RotoRob
This entry was posted on Monday, January 18th, 2021 at 9:34 pm and is filed under FOOTBALL, RotoRob, Super Bowl. You can follow any responses to this entry through the RSS 2.0 feed. Both comments and pings are currently closed.