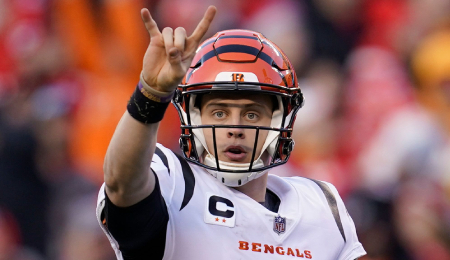 Could Joe Burrow be the Super Bowl MVP? (Sky Sports)

In a matchup of two teams that have never won a championship, the Cincinnati Bengals take on the Los Angeles Rams on Sunday evening in Super Bowl LVI. These two teams are fairly evenly matched on offense, with both teams featuring much better passing than rushing attacks.

On defense, they are even a closer match, with the Rams having a slightly better pass defense and Cincy holding a slim edge in rush D. Meanwhile, neither squad has a distinct turnover advantage (the Rams were +2 in turnovers, while the Bengals finished even).

Small wonder that the odds for this Super Bowl are so close (with the Rams currently favoured at -200).

Let’s take a quick look at a few storylines we’ll be keeping a close eye on in the big game.

1. Quarterback Joe Burrow‘s development this season has been nothing short of phenomenal. After having his rookie season cut short by an ACL tear, he turned in a spectacular sophomore effort. Burrow wasn’t forced to throw nearly as much this season, but was much more efficient. He hasn’t been quite as great during this playoff run, but would it be a huge surprise to see him take home MVP honours in this game? Considering the Bengals hadn’t won a playoff tilt since 1991 before this amazing run, if Burrow can lead them to a championship, he’ll immediately solidify his spot in the elite QB ranks.

In fact, his impact on the city of Cincinnati may soon result in a hell of a lot of babies named Joe (see video below). Don’t forget: when we called Burrow’s performance one of the three biggest surprises of the 2021 NFL season, we suggested that he could help lead the team to a Super Bowl win this season. That call is starting to look pretty astute.

2. Of course, you can’t really discuss Burrow’s breakout this season without also talking about rookie wide receiver Ja’Marr Chase; these two have been joined at the hip since their LSU days. Many were concerned whether Chase could be a stud in the NFL when he dealt with the dropsies in preseason play, but considering what he’s done since, that seems like ancient history. His numbers (81 catches for 1,455 yards for an 18 yard average gain) were insane for a freshman.

Hell, Chase fell just 18 yards of matching Bill Groman‘s record for a rookie. Seeing how Chase does matched up against Rams five-time Pro Bowl cornerback Jalen Ramsey is going to be fascinating, and this perhaps could be the battle that could swing this game one way or the other.

3. Another matchup that could decide the game is Cincinnati’s beleaguered offensive line against the Rams’ pass rush, featuring stars Aaron Donald and Von Miller. The Bengals’ woes in this area have been well documented as Burrow was sacked more than any other QB this year (51 times, plus another dozen in the postseason — including nine against the Titans alone).

Cincy will address this issue in the offseason, but for now, it will need a similar showing on Sunday that it got against KC in the AFC Finals, when the Chiefs only got to Burrow for one sack. Because if the o-line doesn’t protect Burrow, it could be a very long day for the Bengals.

1. If Burrow is the likeliest Bengal to take home the MVP hardware, wide receiver Cooper Kupp has to be among the favourites to do so for the Rams. Kupp enjoyed a historic season (145 receptions for almost 1,950 yards with 16 touchdowns) and has kept on rolling in the playoffs (25 catches for 386 yards with four scores). If the Bengals can somehow find a way to limit him, it may force the Rams to go run-heavy on offense.

2. Veteran quarterback Matthew Stafford can be prone to Jekyll and Hyde moments. Overall, he enjoyed arguably the second-best season of his 13-year career in 2021, topping 400 completions, matching his career high in completion rate, flirting with 5,000 yards passing and tying his personal best with 41 touchdown passes.

But Stafford was also picked 17 times, including 13 over the final nine games, and in each of the last two seasons he’s thrown more interceptions that were returned for TDs than anyone. Taken first overall by Detroit in 2009, Stafford has finally made it to the Super Bowl, something he was supposed to do for the Lions at some point. Of course, the fact that he never won a playoff game with Detroit made that a bit difficult. Therefore, few players have more to prove in this game than Stafford. We’ll see if he’s up to the challenge.

3. Another man with a ton to prove in this game is 36-year-old Head Coach Sean McVay. This is his second crack at a Super Bowl title after falling short in 2019 to the Patriots in such heartbreaking fashion. Still, win or lose, McVay goes home to this, so it’s hard to feel too sorry for him.

English drummer Phil Collins has been active since 1963, taking a break from 2011 to 2015. Best known for his work with Genesis, he’s also enjoyed a fine solo career, highlighted by his 1981 debut album, Face Value. The lead single from this effort was “In the Air Tonight,” which Collins co-produced with multiple Grammy award winning producer Hugh Charles Padgham, who also worked with XTC, among others.

Winning three playoff games on the road is no easy feat, but it seems like old hat for Brady, who only did it four times with the Patriots before repeating the trick this season with the Bucs. Now, strangely, Tampa Bay will get home field advantage in the Super Bowl, but Brady is showing no weakness after overcoming the Saints and Packers — albeit with three interceptions courtesy of Green Bay’s defense.